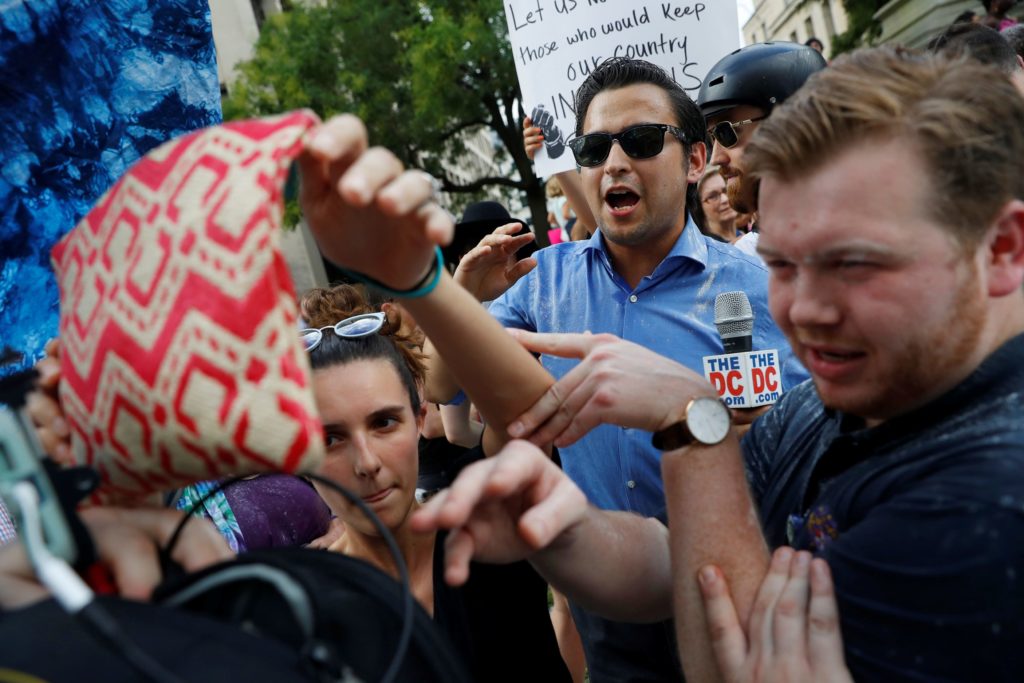 Demonstrators confront a group of conservative journalists during a protest calling for the removal of the statue of Confederate General Albert Pike in Washington, U.S., August 18, 2017. REUTERS/Aaron P. Bernstein

In April, the Reporters Committee for Freedom of the Press issued its third annual report of the U.S. Press Freedom Tracker, a project documenting attacks on journalists and news outlets.

This year’s report analyzed the Tracker’s 2019 data, which recorded 34 physical attacks against journalists, nine searches/seizures, three attempts to prosecute government leaks, 27 subpoenas, seven prior restraints, and nine arrests. As with other years, protest sites and borders remain particularly dangerous places for journalists to conduct reporting. The report also noted an uptick in the number of subpoenas issued for journalists’ records, suggesting that some public officials and corporations have come to use this legal tool to harass and retaliate against journalists for critical reporting.

First Amendment Watch staff writer Soraya Ferdman spoke with Sarah Matthews, a staff attorney at the Reporters Committee. In addition to preparing the annual report, Matthews supervises the Reporters Committee’s hotline for journalists and serves on the advisory committee for the Red Press Initiative which researches the vitality of press freedom in Indian Country. Matthews serves on the Tracker’s advisory board alongside a number of the nation’s leading press freedom groups.

Matthews discussed why protest sites and borders are so risky for journalists, and how legislators may be able to better protect reporters from retaliatory subpoenas. She also talked about how the Reporters Committee uses the Tracker’s data to inform their advocacy work.

This interview was edited for clarity and length.

Ferdman: What do you see as the function of the tracker? How do you want it to be used, and how has it been used since its launch in 2017?

Matthews: The tracker was started by more than two dozen press freedom groups at a time when there seemed to be a rise in the number of attacks against the press. We felt it was time to create a central repository to document threats like the number of journalists investigated,  attacked, and subpoenaed. The goal was to collect this data so that we can use it as a resource for the press and public, and also to inform our work and advocacy.

In terms of your question about how it should be used, every year now I spend many, many hours reviewing all of the press freedom incidents, trying to make sense of it and trying to identify trends, and how to use that information to help journalists.

Ferdman: Can you give me an example?

Mathews: In 2017, we did our first report, and one thing that was very clear was that protests were the most dangerous place for journalists. That was the place where journalists were the most likely to be arrested, to be attacked, and to have their equipment searched and seized. Seeing that we updated our legal guide for journalists covering protests using the new data. We used the guide to run training sessions for journalists, we talked about it at conferences, and tried to help bring that issue into the public dialogue.

Ferdman: Looking at 2019 data, it looks like protests are still one of the riskiest places for journalists to conduct reporting. Why is that?

Matthews: The last three years we’ve seen that journalists are at the most risk when covering protests. I think that it’s because of a common law enforcement technique called “kettling.” Kettling is where you corral a large number of protestors indiscriminately into a confined space, like cattle. And then you just arrest people en masse. That’s what we’re seeing: journalists are getting swept up into these kettles and arrested.

There are other problems with this too. Folks often don’t want to be videotaped, so when journalists are there with their cameras trying to record, sometimes the protesters are really angry and they will try to knock a camera out of a journalist’s hand. They will actually physically hit the journalists. Sometimes we see law enforcement attacking journalists when they are trying to control the crowd.

“We’ve heard of journalists who have had to delete images on their phones. You can’t get that stuff back,” Matthews said.

Ferdman: The 2019 report says that the border has become a hotbed for attacks on the press, specifically at the U.S.-Mexico border. Customs and Border Protection agents have been known to subject reporters to secondary screenings where they might take computers, notebooks, journals, and cell phones from reporters. How can journalists protect their data from those searches?

Matthews: It’s such a big issue that we made a list of tips for journalists reporting on border issues. The high-level takeaway is that it’s an area where being proactive can make a huge difference. We’ve heard of journalists who have had to delete images on their phones. You can’t get that stuff back. In terms of steps journalists can take, they should make sure their devices are password-protected, that they’ve logged out of their email and other apps. They should use end-to end-encrypted services like Signal, and ensure that their messages on their devices are set to autodelete. The goal is to limit the amount of sensitive data that are on their devices.

Ferdman:  There are specific places where reporters face increased risks, but there are also specific tools that are being used to harass or retaliate against journalists. Can you talk about the uptick in the number of subpoenas filed against journalists and how they chill speech?

Matthews: Subpoenas are underreported for a variety of reasons. We don’t know if the total numbers of subpoenas issued to journalists across the country actually increased. That said, the tracker’s data does support our own anecdotal evidence that there has been an uptick.

I think the apparent rise in subpoenas can have a chilling effect on critical and investigative reporting. They impose a significant financial, emotional, and professional burden on journalists and news outlets. If a journalist refuses to comply with a subpoena in order to protect a source or sensitive work products, that journalist can risk jail time or hefty fines. And if a journalist is worried about being subpoenaed and is trying to avoid it, [he or] she may go as far as destroying [his or] her notes.

Matthews:  I love that you asked me this question because I literally had the same exact thought when I was thinking about the subpoenas! This year, several journalists who reported being subpoenaed believed that the subpoena was being used to retaliate against them or harass them. Anti-SLAPP laws are designed to protect people’s right to engage in First Amendment activity without being subject to a frivolous lawsuit as a result of it. If subpoenas are being used in a similarly retaliatory and harassing way, that’s very troubling. I’ve been thinking about this, and I think if the court sanctioned parties who filed frivolous or retaliatory subpoenas more, this would go a long way to disincentivize those subpoenas.

Another thing we can do is do a better job at educating the legal bar and the court about the importance of protecting journalists’ communications with sources, as well as legal protections such as shield laws that already serve this purpose and that exist in nearly every state in the country. If attorneys were more familiar with the shield laws that already exist, they would realize that their subpoenas are often likely to fail and they would be less likely to spend the time and resources issuing them.

“If attorneys were more familiar with the shield laws that already exist, they would realize that their subpoenas are often likely to fail and they would be less likely to spend the time and resources issuing them,” Matthews said.

Ferdman: The report sites, three incidents of violence against female journalists. In each case, the female reporter was attacked in a sexual way. One was forcibly kissed, another forcibly hit on the buttocks, and a third, both forcibly kissed and fondled. Why was it important to highlight these kinds of attacks in your report?

Matthews: When I go through the Tracker data every year, I’m always trying to identify trends and important takeaways. This year, I was looking through the attacks, and these three attacks on women just looked so similar. It was just unusual. I hadn’t seen that before. And so I thought it was worth highlighting. I think it was important to get across that female journalists face special risks when they’re reporting in the field.

Eric Goodman has been identified as the guy who pretended to spank me and kiss me during the live shot Friday. He’s charged with harassment with physical contact. He has written me an apology letter, I’ll read that on @wave3news later today. pic.twitter.com/chgG9tikVp

Ferdman: The report’s conclusion discusses what may happen in 2020. Clearly, the global pandemic will have a large impact. Can you talk a bit about some of the resources the Reporters Committee has put together to help journalists navigate the specific challenges linked to the public health crisis?

Matthews: Public oversight is particularly important during a crisis when the government’s powers are at their peak. At the same time, we are now seeing court closures and restrictions on access to public records, public meetings, and public spaces. Certainly some restrictions may be necessary to limit the spread of the virus, but some of these restrictions can be overly broad and unduly harsh, and can impede the right of the public to access information, and attend public meetings and court hearings.

The Reporters Committee has published some resources that are designed to do a couple of things. One is to monitor the restrictions on access to courts, public meetings and public records, and emergency measures. We’ve also provided resources for journalists, legislators, and courts, to encourage them to protect the press and the public’s right of access to government information and proceedings.

Two weeks ago, the Trump administration petitioned SCOTUS to review a ruling preventing him from blocking critics from his Twitter account. Knight Attorney Meenakshi Krishnan talks about why his arguments are likely to fail should the Supreme Court decide to take the case.