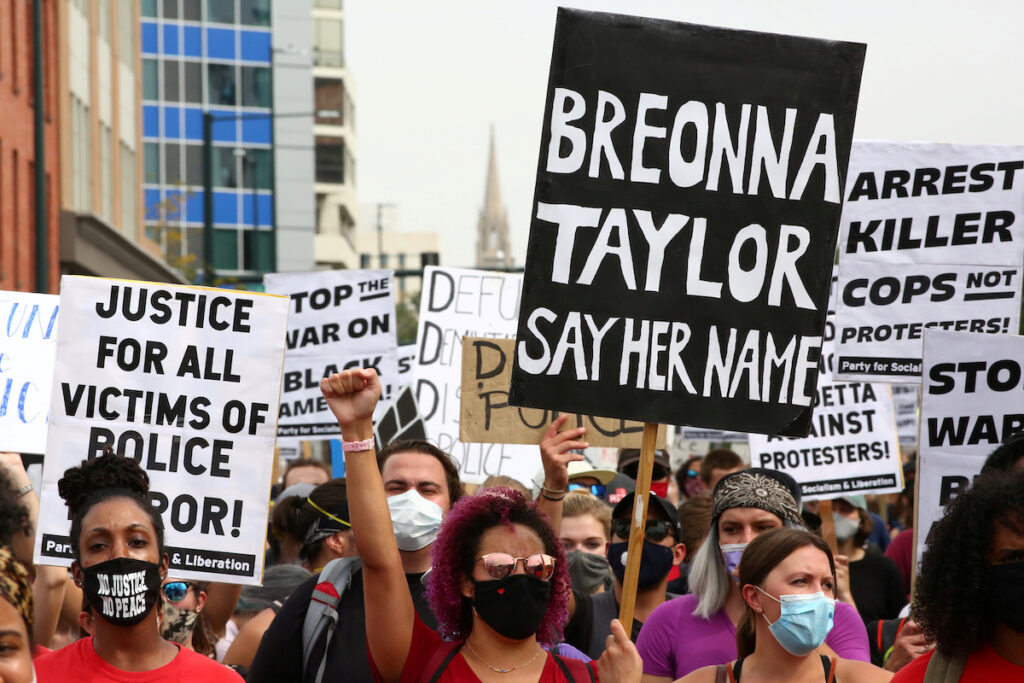 On March 11th, the Kentucky state Senate passed SB 211, a bill that would make it a crime to taunt a police officer, raise penalties for crimes associated with rioting, and prohibit camping in public spaces. The bill passed in the aftermath of protests this summer over the police killing of Breonna Taylor.

While there may exist some disagreement as to whether raising penalties for crimes associated with rioting violates the First Amendment, there is at least one provision in the Kentucky bill that is unconstitutional.

Under SB211, a person would be prohibited from “accost[ing], insult[ing], taunt[ing] or challeng[ing] a law enforcement officer with offensive or derisive words, or by gestures or other physical contact, that would have a direct tendency to provoke a violent response from the perspective of a reasonable and prudent person.”

RonNell Andersen Jones, a law professor at the University of Utah, said the legislation is “really troublesome,” and offered two reasons why it would likely run afoul of the First Amendment.

First, she explained,  the law targets speech that is critical of government actors.

“As a starting principle, if the government made it a crime purely to speak to an officer in ways that are insulting, offensive, or derisive, that would almost certainly be an unconstitutional restriction on the content of speech. The First Amendment broadly protects our right to speak in insulting ways—and First Amendment doctrine is especially concerned about maintaining space for people to criticize or condemn government actors,” Jones said in an email.

Second, Jones explained that while the Supreme Court has upheld that the government is allowed to restrict speech that “by their very utterance tend to incite an immediate breach of peace,” it did not make sense to apply that to cases involving police officers.

“It looks like they are trying to make the statute fit within the so-called ‘fighting words’ exception to First Amendment protection. Under that doctrine, the state can constitutionally punish words that ‘by their very utterance tend to incite an immediate breach of the peace’,” Jones said.

“The idea is that we have a societal interest in making sure people don’t punch other people, and so we can stop people from saying words that will immediately, reflexively, cause the hearer to throw a punch.”

But the fighting word doctrine is aimed to stop violent reactions from ordinary people, Jones explained, not police officers who should be expected to handle taunts or offensive speech without reacting violently.

Laws banning people from insulting police officers have been struck down by courts before. More than 30 years ago, a Houston police officer arrested Raymond Wayne Hill for yelling “Why don’t you pick on somebody your own size?” while another officer arrested one of his friends. The officer claimed Hill had violated an ordinance that made it illegal to “verbally abuse” an officer in the execution of his duty. In City of Houston v. Hill (1987), the Supreme Court invalidated the ordinance on First Amendment grounds and wrote that the “freedom of individuals to verbally oppose or challenge police action without thereby risking arrest is one of the principal characteristics by which we distinguish a free nation from a police state.”

More than 30 states have introduced bills aimed at restricting public assembly since the Black Lives Matter protests this summer. Free speech advocacy groups, like PEN America, have criticized these bills broadly for creating new ways for a state to intimidate and harass protesters.