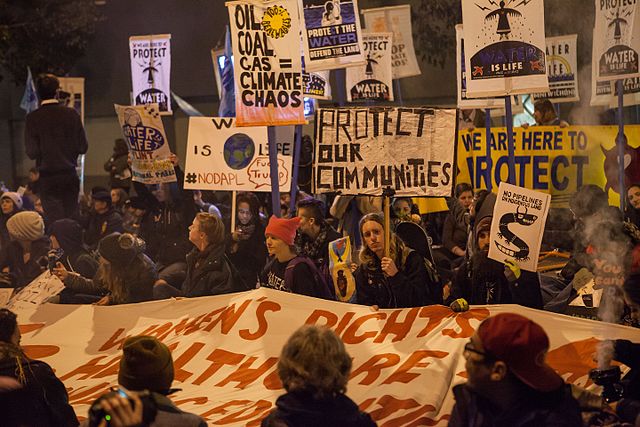 America was born in the protests of 1765 to 1776. Large crowds assembled around liberty trees and liberty poles, hanging British officials in effigy, and thousands of people paraded through the streets of colonial towns voicing loud dissent against British taxes and other measures they considered oppressive. Today’s lawmakers seem much more squeamish about the right to assembly, which is now enshrined in the First Amendment. Reacting to the demonstrations that have taken place throughout the U.S. over the last few years, many states have moved to restrict public demonstrations by a variety of means. Some measures that are enacted into law will surely be tested in court as violations of the First Amendment.

Kentucky Governor Andy Beshear signed a similar bill on March 16th which redefined natural gas and petroleum pipelines as “key infrastructural assets,” and made it a first-degree criminal mischief offense to deface or tamper with fossil fuel infrastructure.

On March 18th, South Dakota Governor Kirsti Noem signed into law a bill that made the “interruption or impairment” in gas service a felony. Gov. Noem also passed a second bill that increased punishment for persons “instigating, inciting, or directing” riots.

Only the West Virginia law includes an exception for picketers who organize protests on the company’s property over issues involving “wages, salaries, hours, working conditions, or benefits”.

First reported by HuffPost, reporter Alexander Kauffman was contacted by Connor Gibson, a researcher at Greenpeace USA, who believed legislators had taken advantage of the fact that national attention was focused on the coronavirus, and not on pollution.

“While we are all paying attention to COVID-19 and the congressional stimulus packages, state legislatures are quietly passing fossil-fuel-backed anti-protest laws,” Gibson told HuffPost. “These laws do nothing new to protect communities. Instead, they seek to crack down on the sort of nonviolent civil disobedience that has shaped much of our nation’s greatest political and social victories.”

May 18, 2018: Lata Nott: These Two States Are Pushing Laws To Criminalize Some Protests

Newseum Institute’s First Amendment expert, Lata Nott, calls out legislators in Louisiana and Minnesota for proposing bills that “would criminalize the activities of groups protesting the construction of oil pipelines” and thereby negatively affect the First Amendment freedom of assembly. This is the latest in efforts by states to “place restrictions on when and how we exercise [freedom of assembly]…these proposed laws seem specifically designed to intimidate and dissuade people from protesting at all.” 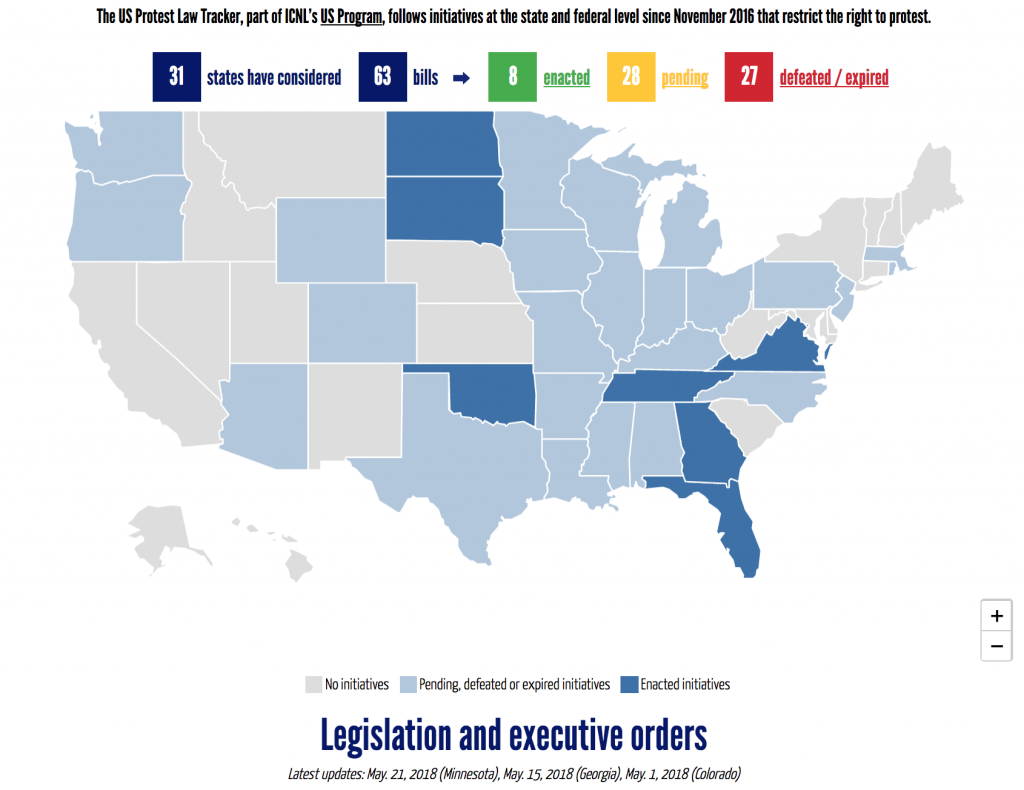 The NLG found in February that the number of anti-protest bills reached nearly 60 with 9 bill already introduced (or-reintroduced) in 2018 alone. Follow along with the US Protest Law Tracker, part of ICNL’s US Program, which follows initiatives at the state and federal level that restrict the right to protest.

Bills were introduced in five states this year to grant civil immunity to drivers who unintentionally hit protestors when demonstrators block the streets. However, legislators in Florida, North Carolina, Rhode Island, Tennessee and Texas denied that their proposals would in any way condone the driver in Charlottesville who killed a pedestrian with his car. Instead, policymakers continued to defend their bills as a deterrent to protestors taking to the streets without a permit.

A statement by U.N. human rights experts said that anti-protesting bills in 19 states threaten “to jeopardize one of the United States’ constitutional pillars: free speech.” They urged states not to respond to some incidents of violence by stripping “other protestors of their right to freedom of peaceful assembly.” The same experts criticized Russia for its response to peaceful street demonstrations.

According to The Atlantic magazine, the introduction of anti-protest legislation in multiple state legislatures “comes amid a revival of disruptive protests,” ranging from Black Lives Matter demonstrations to the Women’s March on Washington.

Traci Yoder of the National Lawyers Guild takes a deep dive into the anti-protest legislation, grouping similar proposals to demonstrate specific trends such as “bills removing liability from drivers who ‘accidentally’ hit and kill protesters.” She finds the bills create “an atmosphere of confusion and fear. … likely to have a chilling effect on dissent.”

The Washington Post reports reasons put forth by state legislators both for and against the bills proposed since President Trump’s election. The article also provides some historical context, noting “legislative backlash” to civil rights protests such as the Montgomery Bus Boycott compared to current lawmakers reacting to demonstrations organized via social media. At the end of the article, there is a brief state-by-state description of bills that have been introduced.

In a detailed blog post, staff members with the ACLU Speech, Privacy, and Technology Project criticize the rise of anti-protest legislation across the nation and say many of the state bills are unconstitutional. In fact, they specify “protesting in the streets is a fundamental constitutional right.”

“Bills that would increase penalties for unauthorized protests” have been introduced in multiple state legislatures across the nation, NPR reports. These proposals are sparking debate between those who advocate for public safety versus some who call them “an attack on free speech.”

A sampling of some of the states that have considered laws restricting demonstrations.
ARIZONA: To Arrest People Who Plan Protests

To punish violent protestors incited by paid organizers, Arizona state senators passed a bill to apply racketeering laws to demonstrations that cause property damage. SB 1142 would allow prosecution of everyone who participated in the protest and seizure of their assets, including individuals who remained peaceful. It also authorizes the arrest of people who are planning demonstrations. Sen. Steve Farley, D-Tucson, was quoted saying, “That will have a chilling effect on anybody, right or left, who wants to protest something the government has done.’’

In an effort to prevent any demonstrations involving “tampering with oil and gas equipment,” Colorado State senators passed SB 17-035 to raise the crime from a misdemeanor ($1,000 fine) to a felony ($100,000 fine). The official Colorado record of the bill then reports simply that the bill moved to the House and “lost.”