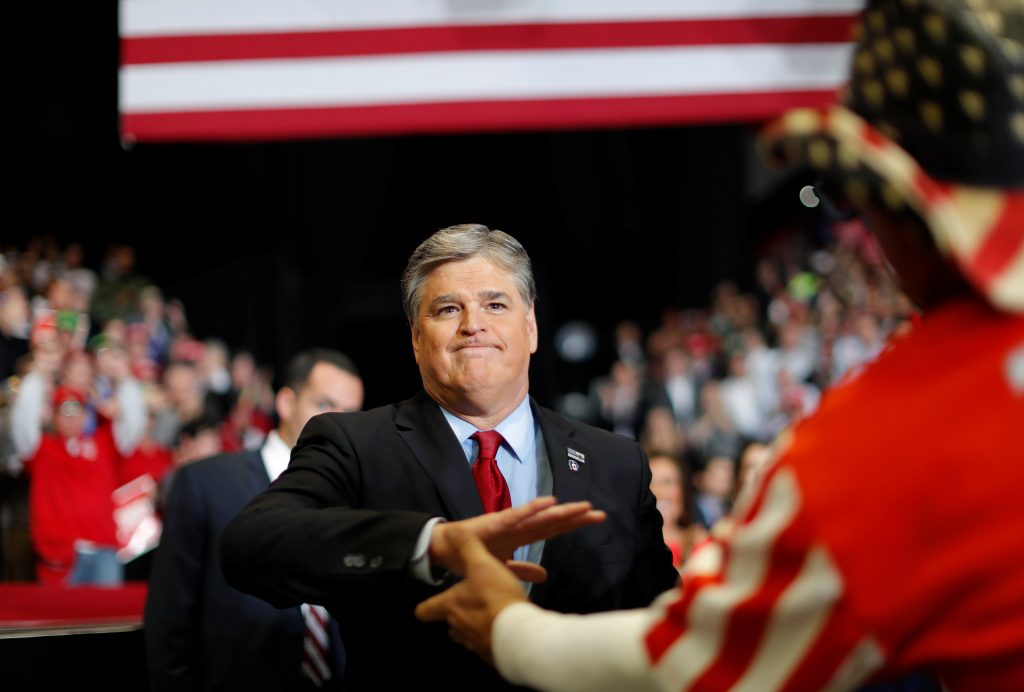 Sean Hannity from Fox News participates at a campaign rally on the eve of the U.S. mid-term elections at the Show Me Center in Cape Girardeau, Missouri, U.S., November 5, 2018. REUTERS/Carlos Barria

On April 18th, The Times published a column by Ginia Bellafante profiling coronavirus victim Joe Joyce. In the piece, Bellafante noted that Joyce was a Trump supporter and regularly watched Fox News. According to the profile, on March 1st, Joyce and his wife flew to Florida, and then went on a 14-day  cruise to Spain. Joyce and his wife returned to New York on March 14th, and soon after, Joyce fell ill with the coronavirus and died on April 9th.

In The Times piece, Bellafante quoted Joyce’s daughter, who told the reporter, “He watched Fox, and believed it was under control.” The profile then notes that in early March, Hannity went on air and said that he didn’t like the way the American people were getting scared “unnecessarily,” and accused the media of trying to “bludgeon Trump with this news hoax.”

In a letter drafted by Hannity’s lawyer, Charles Harder, he demanded a retraction and a public apology over the alleged defamatory statements. “You have acted with actual malice in publishing the foregoing statements. As detailed herein, it was readily apparent at the time of publication that Mr. Hannity had devoted substantial, truthful coverage to the coronavirus, and his remarks attributed by you were made eight days after Mr. Joyce had already embarked on his cruise,” reads the letter.

Harder first came to fame in 2012, when he was one of the lawyers who represented former professional wrestler, Terry Bolleau, aka Hulk Hogan, in an invasion of privacy suit against Gawker Media. The suit dragged on for four years, and in 2016, the two parties settled for $31 million. The settlement, however, bankrupted Gawker.

He gained further notoriety in 2017 when Harder, representing Harvey Weinstein, threatened to sue The Times for defamation after the newspaper published a story about allegations of sexual harassment. A lawsuit was never filed, however.

On February 26, 2020 Trump’s reelection campaign, represented by Harder, sued The New York Times  for defamation over an opinion piece published in March 2019 that accused Trump’s campaign of colluding with Russia to undermine the 2016 presidential election.

Nearly a week later, on March 2, Trump’s reelection campaign, again represented by Harder, sued The Washington Post  for libel over two op-eds published in June 2019. Both of the opinion pieces accused the Trump campaign of conspiring with foreign governments to interfere with the 2016 presidential election.

And on March 6th, Harder, once again on behalf of Trump’s reelection committee sued CNN  for defamation over an op-ed piece published in June 2019 that argued that former FBI Director Robert Mueller should have charged the Trump campaign with obstruction of justice.

In a letter to Harder about his latest effort to threaten to sue a media company for defamation, Times’s legal counsel, David McCraw wrote, “The columns are accurate, do not reasonably imply what you and Mr. Hannity allege they do, and constitute protected opinion.”

“In response to your request for an apology and retraction, our answer is ‘no,’ ” the letter concludes.