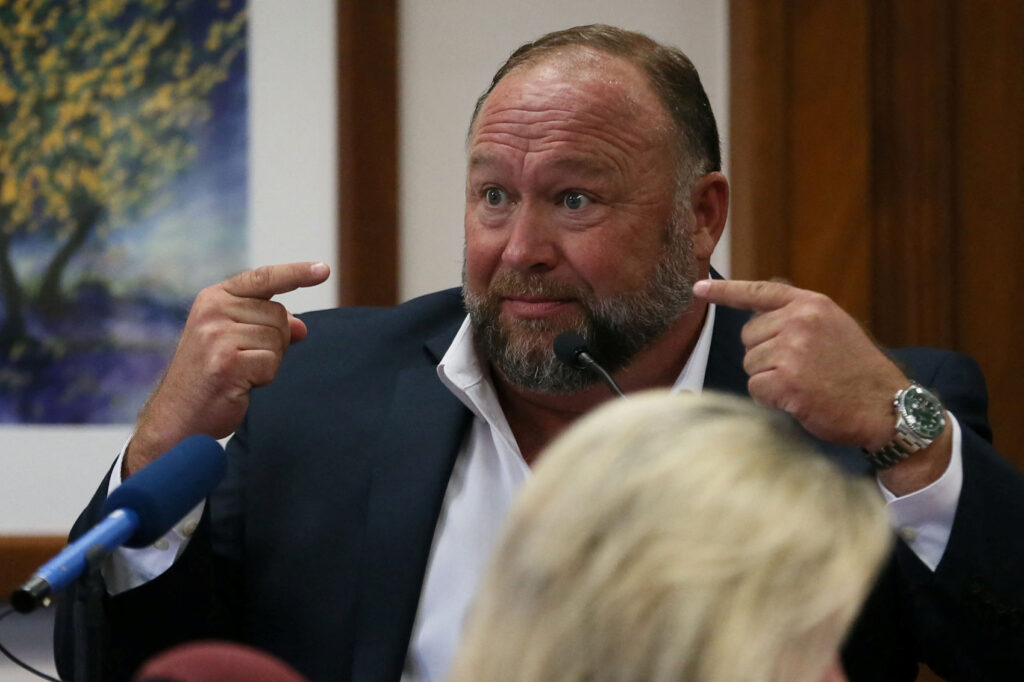 Alex Jones is called up to testify at the Travis County Courthouse during his defamation trial in Austin, Texas, Aug. 2, 2022. (Pool Photo via Reuters/Briana Sanchez)

Conspiracy theorist Alex Jones filed for personal bankruptcy Dec. 2, citing the $1.5 billion in damages he owes to nine families who lost their children in the Sandy Hook Elementary School massacre. The damages were awarded to the families who the court determined endured a decade of defamation and emotional distress due to Jones’ conduct.

This personal filing follows a separate bankruptcy claim by his company, Free Speech Systems, that was filed in July. But the company’s filing sparked a probe into the finances of Free Speech Systems at the request of the nine families, who claimed Jones had “systematically transferred millions of dollars” to himself and relatives. The families alleged that the company’s bankruptcy was a ploy to avoid paying damages.

Jones filed for Chapter 11 personal bankruptcy in the U.S. Bankruptcy Court of the Southern District of Texas, Houston Division. In the filing, Jones noted that the estimated worth of his assets is between $1 and $10 million, but that his liabilities are between $1 and $10 billion.

A Texas court in August awarded a pair of Sandy Hook parents nearly $50 million in damages. In October, eight other families and an FBI agent were awarded more than $965 million in defamation and emotional distress damages by a Connecticut jury, as well as $473 million in punitive damages.

Connecticut Judge Barbara Bellis also temporarily blocked Jones on Nov. 9 from transferring or moving assets out of the United States at the request of the plaintiffs who claimed Jones would attempt to avoid payment.

The filing lists all of the plaintiffs who were awarded damages in both Texas and Connecticut, but the largest creditor is Robbie Parker, who lost his daughter Emilie in the massacre. Parker was awarded $120 million for the emotional distress Jones inflicted.

Last year Jones was held liable by default in three separate lawsuits, after he and his company refused to turn over documents the court requested over the four-year litigation, including financial records. But according to a motion filed Oct. 21 in the Connecticut Superior Court in Waterbury, Jones requested a new trial and argued that he did cooperate in the discovery process.

Jones’ attorneys argued in the motion request to set aside the verdict “that the cumulative weight of the court’s ruling on pre-trial motions and its evidentiary rulings resulted in a complete abdication of the trial court’s role in assuring a fair trial resulting in a substantial miscarriage of justice. Jurors were presented with half-truths and led to believe that facts had been established where no such thing had occurred; a disciplinary default for discovery non-compliance permitted the plaintiffs’ counsel to mislead the jury … The defendants seek a new trial. The verdict in the instant case is both unjust and against the weight of the evidence.”