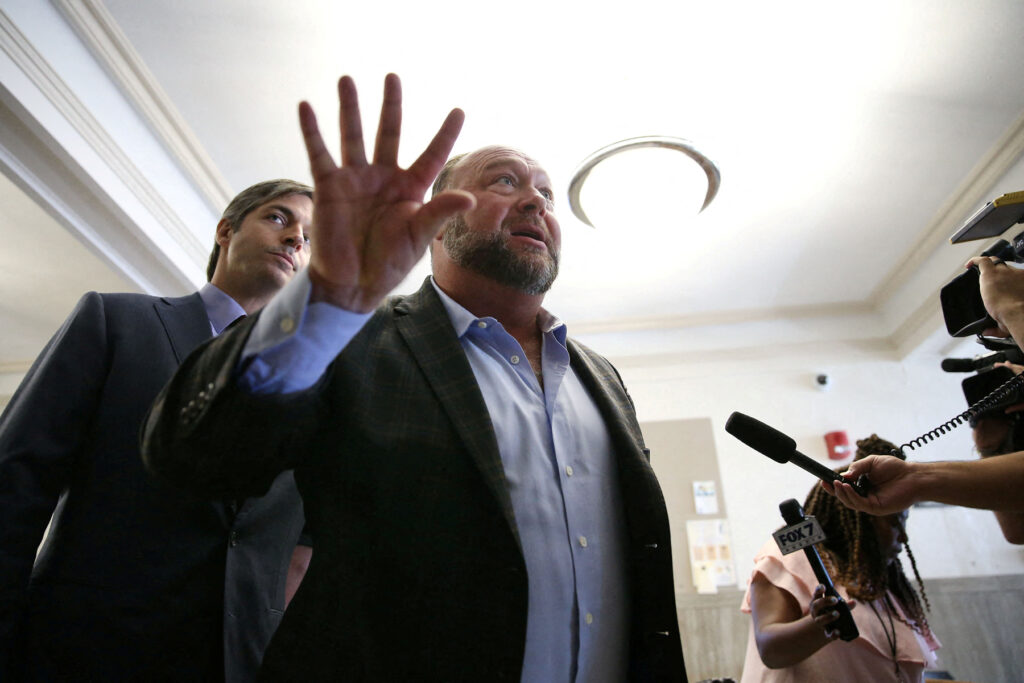 Alex Jones talks to media during a midday break during the start of a jury trial that will decide how much he must pay the family of a child killed in the 2012 Sandy Hook massacre that he falsely claimed was a hoax, at the Travis County Courthouse in Austin, Texas, July 26, 2022. (Reuters Pool Photo/Briana Sanchez)

Nine families who lost children during the Sandy Hook Elementary School massacre in Connecticut in 2012 filed a motion requesting a court-appointed committee to investigate and oversee the conduct of the Alex Jones-owned company, Free Speech Systems.

The motion, filed Aug. 25 in the U.S. Bankruptcy Court of the Southern District of Texas, Houston Division, says Jones has “systematically transferred millions of dollars” to himself and relatives, despite the company filing for bankruptcy to allegedly avoid paying damages to the families.

In a response filed Aug. 28, Jones’ attorneys state that the families’ “motion is brimming with inaccuracies and allegations that have no basis in fact.”

A jury in August assessed $49.3 million in punitive and compensatory damages, following a defamation case filed by Sandy Hook parents Neil Heslin and Scarlett Lewis. The pair sought relief for emotional distress and defamation due to Jones’ allegations that the Sandy Hook massacre, in which their 6-year-old son Jesse was killed along with 19 other children and six educators, was a “giant hoax” and the victims’ parents were “crisis actors.”

“Since the Sandy Hook Families filed their lawsuits, the Debtor [Free Speech Systems] has systematically transferred millions of dollars to Alex Jones and his relatives and other insiders,” the families’ filing said. “It claims to owe a massive, secured debt to an insider that was first documented as a loan when the Sandy Hook families were securing key wins in Connecticut and Texas, but no records show an actual debt existed before the Sandy Hook Families sued.”

The motion says that during the lawsuits against Jones, he withdrew between $18 million and $62 million from Free Speech Systems, despite its insolvency due to debt owed to PQPR Holdings, a company they allege is “controlled by Jones’ father.”

“A centerpiece of Jones’ plan to avoid compensating the Sandy Hook Families is the claim that Freedom Speech Systems owes PQPR an enormous debt,” according to the motion.

A balance sheet included in Free Speech Systems’ bankruptcy filing on July 29 lists $79 million in liabilities with $54 million being owed to PQPR.  The families say that the issue with using this debt as a means to avoid payment is that “72% of payments to PQPR” ultimately go to “Jones and the rest to his mother and father.”

According to the motion, upon filing for bankruptcy, Free Speech Systems hired W. Marc Schwartz as its Chief Reconstructing Officer, (CRO), but Schwartz is also the CRO for other shell companies owned by Jones. Schwartz failed to disclose this information. Schwartz also concluded that the PQPR debt is legitimate, and “swore to the truth of that conclusion in the first-day filings,” the motion states.

Jarrod Martin, bankruptcy counsel for the Texas Sandy Hook families, told First Amendment Watch the suit was filed because there isn’t a “level of trust that the Debtor is doing what’s needed in this case,” he said.

“We asked for a committee to investigate and pursue causes of action in the bankruptcy case in order to help the people who Alex Jones has hurt over the years,” Martin added.

After Jones failed to submit necessary documentation to the court late last year, he lost all four Sandy Hook lawsuits by default. When these losses “appeared imminent,” he began transferring up to $11,000 per day, and up to 80% of Infowars’ sales revenue to PQPR, according to the filing. The families claim these transfers were “designed to siphon off the Debtor’s assets to make it judgment-proof.”

“It is our position that there are fraudulent transfers and that the debt to PQPR isn’t legitimate,” Martin said. “There’s no faith that the Debtor will pursue action since Jones still has an ownership interest in the Debtor, and we believe he can fire Schwartz if he wanted to. Jones also has an interest in the purported secured lender, PQPR. We want a committee to investigate and pursue causes of action.”

R.J. Shannon, a partner at law firm Shannon & Lee LLP in Houston, Texas, and co-counsel for Jones in his bankruptcy matter, emailed First Amendment Watch that he had no comment on the families’ motion. He provided the Aug. 28 response.

“While the Debtor and its CRO are endeavoring to reorganize the Debtor’s business for the benefit of creditors, the Plaintiff’s objective is to put Alex Jones and the Debtor out of business,” the response stated. It quoted Heslin and Lewis’s attorney Chris Ball who told the jury deliberating the early August case to “not only take Alex’s Jones’s platform that he talks about away” but “make certain that he can’t rebuild the platform” as “that’s what matters.”