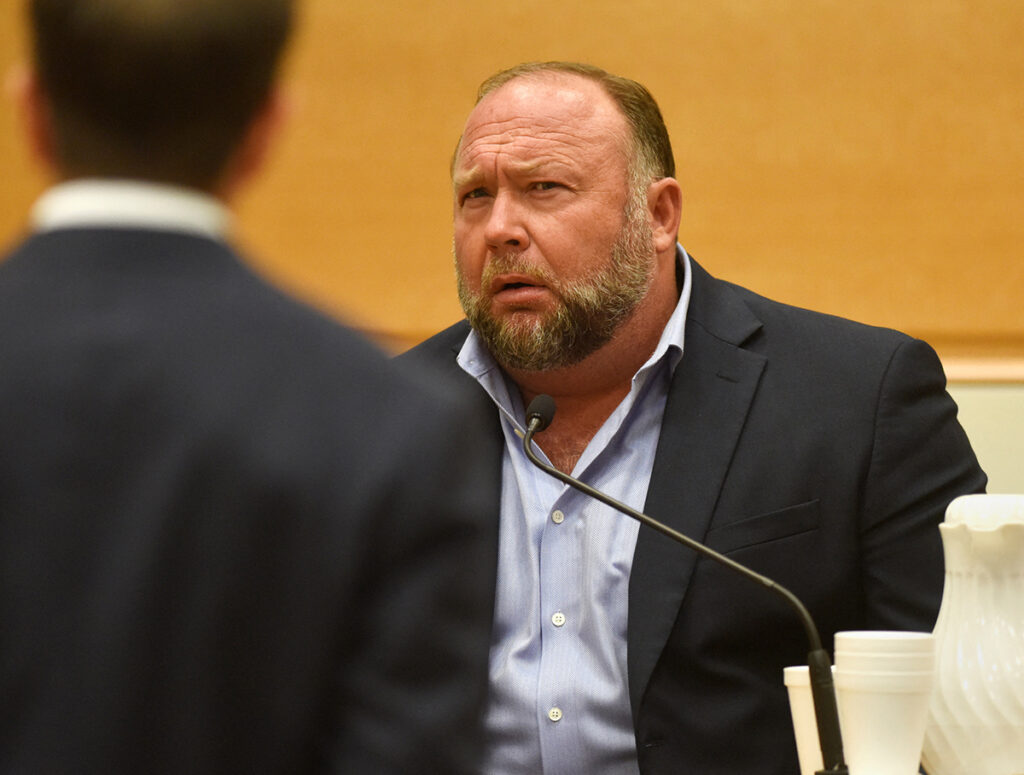 The families began to cry, held hands and consoled one another as the verdict was read which gave each of the plaintiffs millions in damages against Jones and his company Free Speech Systems. Christopher Mattei, a lawyer for the families, joined the tearful exchange in the courtroom.

The ruling comes just weeks after Jones was ordered to pay nearly $50 million in damages to a pair of Sandy Hook parents in a separate trial in Texas in August.

The court determined last year that Jones was liable by default in three separate lawsuits, after he and his company refused to turn over documents the court requested over the four-year litigation, including website analytics and financial records. This trial, the second of the three, was to strictly determine damages.

The families and FBI agent William Aldenberg, who responded to the shooting, sued Jones for defamation and the intentional infliction of emotional distress after the 15 plaintiffs spent the last decade being referred to as “crisis actors” by Jones who said the Sandy Hook shooting was a “hoax,” resulting in harassment from his followers.

They also sued Jones’ company, Free Speech Systems, for violating the Connecticut Unfair Trade Practices Act after he profited from the lies he’s told about the plaintiffs and the shooting on his Infowars show.

In Connecticut, punitive damages are limited to attorney’s and legal fees, but since the families sued Jones using the Unfair Trade Practices Act, the punitive damages award is “not limited to the expenses of bringing the legal action,” wrote University of Connecticut Law Professor Sachin S. Pandya in an email to First Amendment Watch.

In his closing argument, Mattei asked the jury to understand the extent of Jones’ actions and this “lie machine” he had built.

Mattei said the jury had witnessed evidence of defamation “on a historic scale” over the four-week trial, and that the families were targeted for the past decade while “in their most vulnerable moments.”

“It is your job to make sure he understands the extent of the wreckage that he caused,” he continued. “Because you know damn well he doesn’t get it.”

Jones had released numerous broadcasts and articles on his Infowars site about the 2012 massacre at Sandy Hook Elementary School in Newtown, Connecticut, that killed 20 students and six educators. Over the years, he described the mass shooting as “staged,” “synthetic,” “manufactured,” “a giant hoax,” and “completely fake with actors.”

“Don’t ever think the globalists who hijacked this country wouldn’t stage something like this,” Jones said on his Infowars show the day of the shooting. “They kill little kids all day, every day.”

Mattei said this lie calling the massacre a hoax is at the “heart” of who the plaintiffs are, and is attached to a “defining moment of their lives: the loss of a child.”

Jones’ attorney, Norman Pattis, opened his closing arguments with a 19-minute video which aired on Jones’ Infowars show in 2018. The video is of Jones accusing the media of misconstruing his role in “questioning” Sandy Hook, and misrepresenting his views.

Pattis told the jury that he believes Jones “will never be silenced,” and characterized him as a “mad prophet.”

“I’ve never been prouder than I am at this moment,” Pattis said. “Because the easy thing to do would be to tar and feather Alex Jones. But that’s not what the law requires. The law requires that you serve equally, coolly, dispassionately, to evaluate the evidence and render a fair and just and reasonable verdict.”

The families told stories about their lives and loved ones, and the final moments they had with their children before the shooting. They also shared instances of harassment they’ve endured over the years from Jones and his followers.

Mark Barden, who lost his son Daniel in the massacre, told the court that Daniel’s grave had been urinated on by one of Jones’ supporters. He added that his family also received a letter with threats to dig up Daniel’s grave because they believed the boy was still alive.

“This is so sacrosanct and hallowed a place for my family and to hear that people were desecrating it and urinating on it and threatening to dig it up, I don’t know how to articulate to you what that feels like,” Barden said. “But that’s where we are.”

Francine and David Wheeler both testified against Jones after they were harassed by his supporters who believed their son Ben, who was killed at Sandy Hook, was still alive. David said that he had to install a security camera after people kept coming to the door, and was also harassed repeatedly on Facebook.

Francine testified that shortly after Ben’s death, she attended a conference for mothers who lost their children to gun violence. She recalled meeting a woman who had also recently lost her son. When Francine shared that Ben was killed at Sandy Hook, the woman replied, “You’re lying. That didn’t happen,” Francine recalled in her testimony.

Robbie Parker, whose daughter Emilie died in the shooting, was at the forefront of Jones’ claims online that the parents of the victims were “crisis actors.” 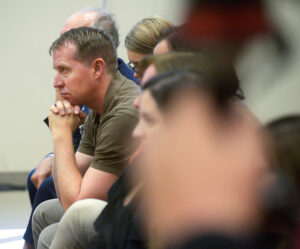 The night after the shooting, Parker gave a press conference and was one of the first parents to do so. Before he began, Parker’s father called him by a childhood nickname, which made Parker smile. This smile was a centerpiece of Jones’ argument that the parents were “crisis actors,” and Parker initially received the brunt of the harassment as a result.

Parker referenced on the stand the tight bond in Newtown among those who experienced the tragedy. “We had this family here of people who knew exactly what we were experiencing … and I didn’t know if I could move anywhere in the country and find that kind of support system,” Parker said. “But I was so ashamed in my belief that I had brought this on everybody because I was the first person who said something, I was the first person who laughed, I was the person who was being targeted.”

Jones did not appear in court for any of the family members’ testimonies. He appeared Sept. 22, but told his attorney he was “boycotting” an expected second appearance this week.

“Where is he? Where’s Alex Jones?” shouted attorney Joshua Koskoff during his closing rebuttal. “He spent more time outside, you heard, at press conferences, getting publicity and driving site traffic to the site on the steps of this courthouse than he did listening to these families.”

“What a terrible thing not to sit and listen to what you’ve done,” Koskoff added. “It’s cowardly. It’s just cowardly.”

Mattei told the jury that this was their one and only chance to “render a verdict of just how much devastation Alex Jones has caused.”

“You represent this community. What will you do? Will you render a verdict that will finally force Alex Jones to understand just how devastating his conduct has been? Because that is the only way, the only way he will stop,” Mattei said.

A third damages trial involving two other parents, who lost their 6-year-old son Noah at Sandy Hook Elementary, is slated to begin in Austin, Texas, later this year.

Editor’s note: This version corrects the spelling of the last name of University of Connecticut Law Professor Sachin S. Pandya.