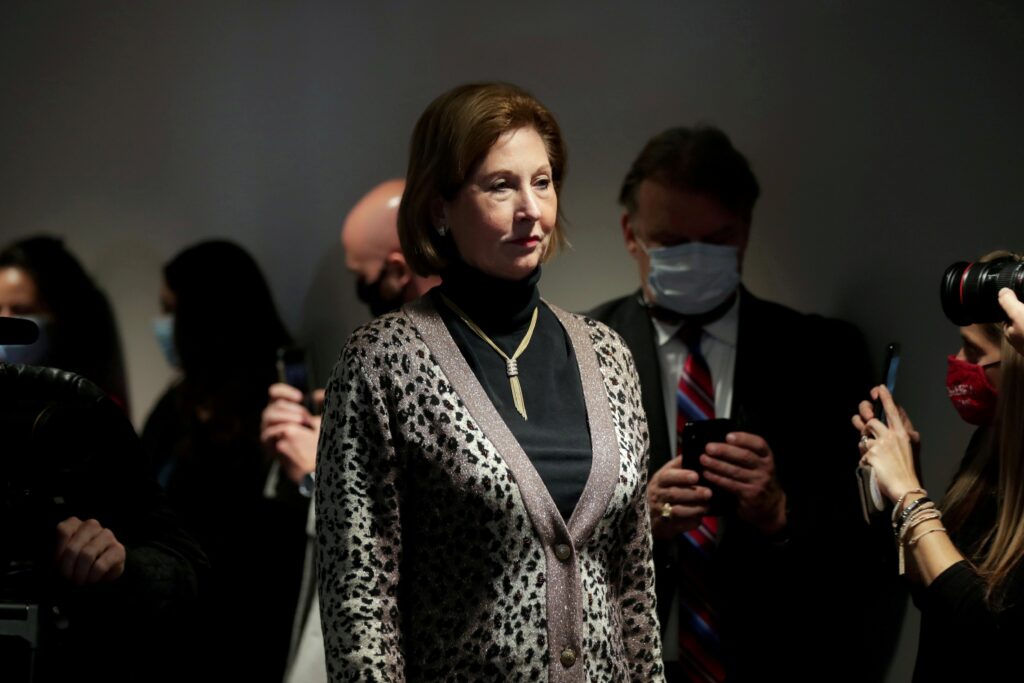 Sidney Powell, a former lawyer for Donald Trump, is asking a federal judge to toss the $1.3 billion dollar defamation lawsuit filed against her by the election technology company Dominion Voting Systems.

Dominion Voting Systems sued Powell for libel in January. The company alleges that during a press conference, a rally, and media appearances, Powell “falsely claimed that Dominion had rigged the election, that Dominion was created in Venezuela to rig elections for Hugo Chavez, and that Dominion bribed Georgia officials for a no-bid contract.”

See also: Are Defamation Lawsuits Being Used to Rein in Disinformation Spread by News Outlets?

In a motion submitted on Monday, Powell’s lawyers argue that her statements are not actionable under defamation law because a reasonable person would understand them as political hyperbole. Her lawyers reason that because she made them as an advocate-attorney of Donald Trump, a “reasonable [person] would not accept such statements as fact but view them only as claims that await testing by the courts through the adversary process.”

Lyrissa Lidsky, Dean of the University of Missouri School of Law and expert in defamation law, called this argument “absurd.”

“Attorneys have ethical obligations not to lie, and she made the false statements in her capacity as an attorney,” Lidsky wrote in an email.

George Freeman, the Executive Director of the Media Law Resource Center, also dismissed Powell’s argument in an email, writing that it did not accord with “basic libel principles.”

“The first argument essentially states that what Powell said is so outrageously stupid and so inherently unbelievable that no one believes it. Then why did she say it, if not to convince people?; and why did she say such things in support of a legal case?” Freeman said.

Powell’s lawyers are also trying to dismiss the claim based on the argument that Powell’s statements were a form of protected opinion. Their theory is that because Powell “disclosed the facts upon which her conclusions were based” a reader was free “to draw his own conclusions.”

Lidsky said this argument was weak because the Supreme Court ruled in Milkovich v. Lorain Journal Co (1990) that a false statement could still be grounds for defamation even if the speaker explained how they had arrived at that conclusion.

“Even if the speaker states the facts upon which he bases his opinion, if those facts are either incorrect or incomplete, or if his assessment of them is erroneous, the statement may still imply a false assertion of fact,” the court ruled in Milkovich.

“If someone says that Mitt Romney committed arson, they are making an assertion of fact. The fact that many other people will not believe that Romney committed arson does not mean that the original statement is somehow an opinion,” Freeman explained over email. “The same goes for the accusation that the voting machine companies rigged or tampered with their machines to drive a Trump victory. Even if Powell could somehow convince someone it might be an opinion, the protected opinion should be based on disclosed facts. Where the disclosed facts are false, as here–where court after court has decided that way–the opinion defense must be rejected.”

If the court rejects Powell’s motion to dismiss Dominion’s claims, the election technology company will still need to show that she made the statements with actual malice, meaning that she knew they were false when she said them, or had a high degree of awareness but stated them anyway.

This is not the only defamation suit Dominion has filed in the aftermath of the 2020 election. The company has also sued Rudy Giuliani, also a former Trump lawyer, and MyPillow CEO Mike Lindell, for falsely accusing the company of rigging the election in favor of President Joe Biden.