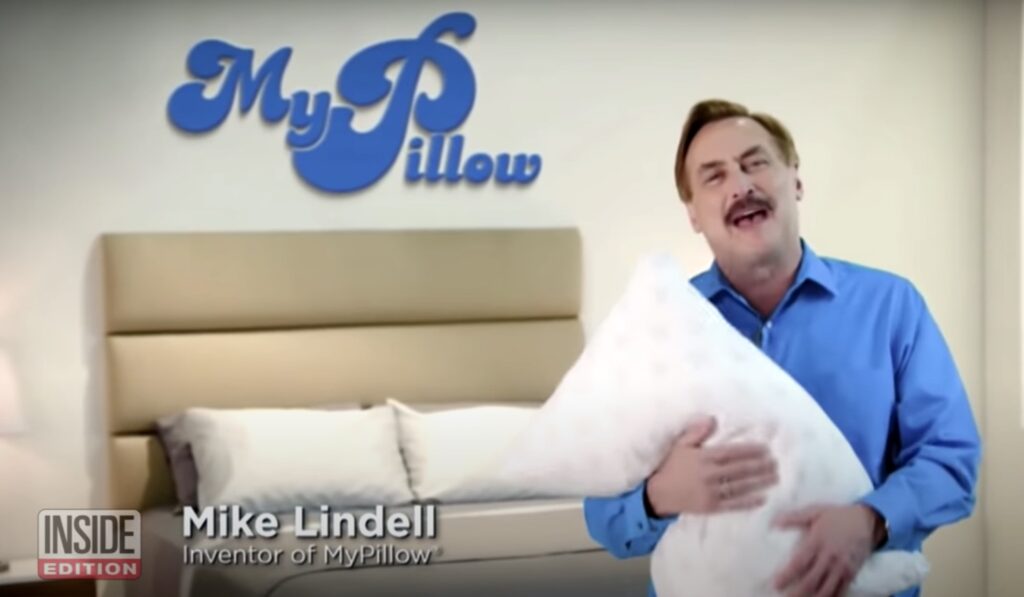 CEO of MyPillow sued by Dominion Voting Systems for spreading false information about their voting machines. Screenshot from YouTube video via Inside Edition. 26 January 2021.

Dominion Voting Systems is suing Mike Lindell, the chief executive officer of My Pillow, for peddling conspiracy theories that Dominion’s voting machines were used to rig the 2020 presidential election in favor of Joe Biden.

Filed on February 22nd in the United States District Court for the District of Columbia, the complaint argues that Lindell intentionally promoted false claims on social media, cable news, and pro-Trump rallies about Dominion’s voting machines in order to promote his business. Dominion lists his company as a co-defendant because they claim MyPillow has profited from Lindell’s lies.

“But Lindell — a talented salesman and former professional card counter — sells the lie to this day because the lie sells pillows,” the complaint says. “MyPillow’s defamatory marketing campaign — with promo codes like “FightforTrump,” “45,” “Proof,” and “QAnon” — has increased MyPillow sales by 30-40% and continues duping people into redirecting their election-lie outrage into pillow purchases.”

The complaint also points to multiple interviews about alleged election fraud where Lindell encouraged viewers to buy his company’s products. During an interview with Right Side Broadcasting Network on January 16th, Lindell claimed that Dominion voting machines were “built to cheat.” At the end of the interview, the hosts gave viewers a code they could use to get a discount on MyPillow products.

Lindell also sponsored “March for Trump,” a cross-country bus tour where the President and his allies delivered speeches arguing that Dominion machines were programmed to steal votes from Trump. On February 2nd, Twitter permanently suspended Lindell, and later the MyPillow company account, for using them to spread lies about the election.

Dominion’s lawyers sent multiple letters to Lindell demanding that he stop spreading false information about the company and provided him with evidence that contradicted his claims. In a letter sent on January 8th, Dominion lawyers highlighted statements from election officials in Michigan, Georgia, and Arizona defending the integrity of Dominion’s voting machines.

Lindell is one of a handful of Trump allies Dominion is suing for defamation. The company also filed similar lawsuits against former Trump lawyers, Rudy Giuliani and Sidney Powell.