Attacks on the Press | Reports 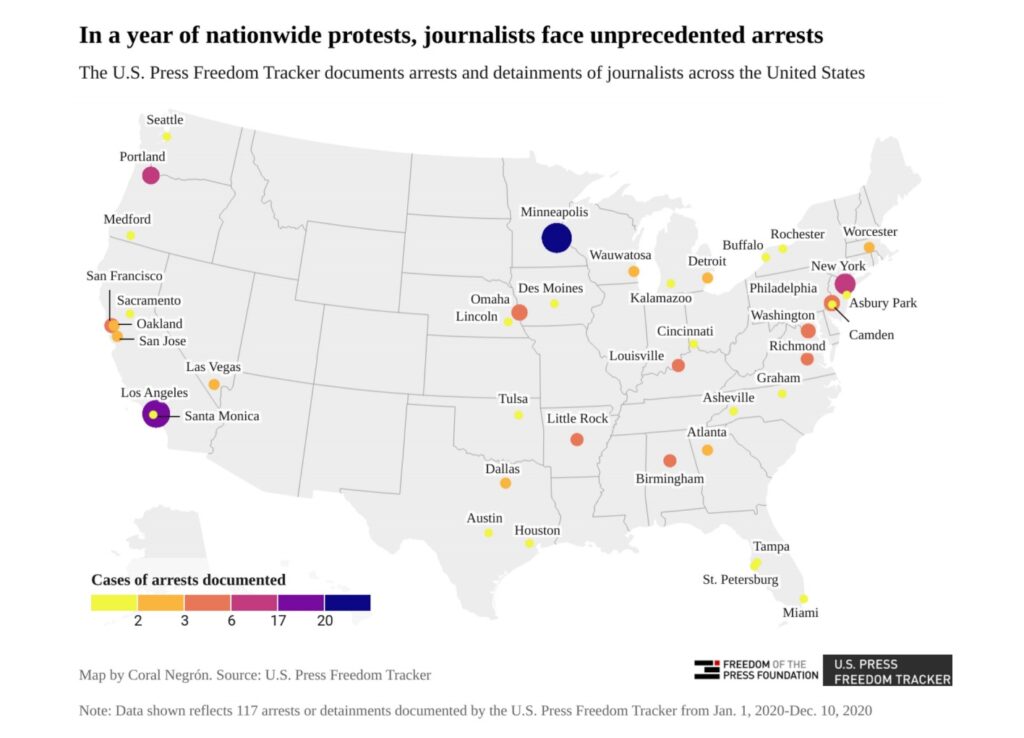 According to a new report published by the Freedom of the Press Foundation, there have been at least 117 verified cases of journalists who were arrested or detained in 2020. The number represents a 1200% increase from 2019 when only nine cases were confirmed.

The report draws on data collected by the U.S. Press Freedom Tracker, an online repository of assaults, arrests, and other forms of obstructions to journalists’ work. In her introduction to the report, Managing Editor Kirstin McCudden says her team is still investigating more than a dozen other cases.

Many of the arrests occurred while journalists were covering interactions between law enforcement and protesters. Beyond the general risks involved in documenting public demonstrations, journalists risk getting caught in a kettle, a police tactic that involves quickly encircling a group of demonstrators in order to block any means of escape. After kettling a group, police often arrest people indiscriminately.

In 2020, the Press Freedom Tracker documented at least a dozen journalists who were caught in the middle of a kettle, some of whom were detained ever after showing police officers their press passes.

Of the 117 cases, 31 met the U.S. Press Freedom Tracker’s criteria for a “violent” arrest. This includes the arrest of Christopher Mathias, a senior reporter for HuffPost who was hit in the stomach with a baton before officers took him into custody. Other journalists who witnessed his arrest told the U.S. Press Freedom Tracker that Mathias had “clearly identified” himself as a journalist to the police.

In another case, NBC News journalist Simon Moya-Smith was following a group of protesters in Minneapolis, Minnesota when police jumped out of a cruiser, and “began pepper-spraying the protesters indiscriminately,” and then ordered everyone to lay on the ground. Moya-Smith also told the officers he was a journalist, but the police arrested him anyway.

“I’m sure one, two or maybe all of them knew that if they allowed me to exercise my First Amendment right as a reporter that I would immediately begin documenting the situation, and I think that is what they were trying to prevent,” Moya-Smith told the Press Freedom Tracker.

While the vast majority of journalists have had their charges dropped, the report counts at least 16 who are still facing “legal trouble.” Many of those still battling charges are freelance reporters who lack the financial and legal resources provided to salaried journalists.