Ranking member of the House Permanent Select Committee on Intelligence Devin Nunes listens to a public hearing on the impeachment inquiry into US President Donald J. Trump on Capitol Hill in Washington, DC, USA, 19 November 2019. Shawn Thew/Pool via REUTERS

In March 2019, Rep. Devin Nunes (R-CA) filed a $250 million defamation lawsuit in Virginia against three users of Twitter, two of whom use parody names to remain anonymous. Now, the congressman has issued a subpoena in an attempt to uncover the identity of one of those accounts, the infamous @DevinCow.

To identify the owners of the parody account, Nunes subpoenaed a law firm representing the defendant.

The law firm has filed a motion to dismiss the subpoena on the grounds that the tweets of Devin’s Cow about Nunes are protected opinion, and that that the plaintiff has yet to present any evidence that they contained false information.

The brief asks that the court to apply the Dendrite standard, a legal test stemming from Dendrite v. Doe, a 2001 case involving anonymous web writing. The standard recognizes the First Amendment protection afforded to anonymous speech by requiring plaintiffs who sue anonymous bloggers to show that they have a valid claim before being permitted to pursue discovery into the identity of the anonymous speaker.

The amicus brief argues that because Nunes has not satisfied these constitutional requirements, his subpoena should be dismissed.

“From Sam Adams to Mark Twain, Americans throughout history have used pseudoynms [sic] for a number of different reasons, such as protecting privacy and preventing official retaliation. The Supreme Court has made clear that “an author’s decision to remain anonymous, like other decisions concerning omissions or additions to the content of a publication, is an aspect of freedom of speech protected by the First Amendment,”  ACLU Staff Attorney Brian Hauss, who signed the amicus, wrote in a blogpost for the ACLU.

Devin Nunes’ cow (@DevinCow) currently has over half a million followers on Twitter, and frequently posts criticisms of Nunes. The account’s bio, “Hanging out on the dairy in Iowa looking for the lil’ treasonous cowpoke” also contains a link to a Tumblr page with satirical depictions of the congressman. 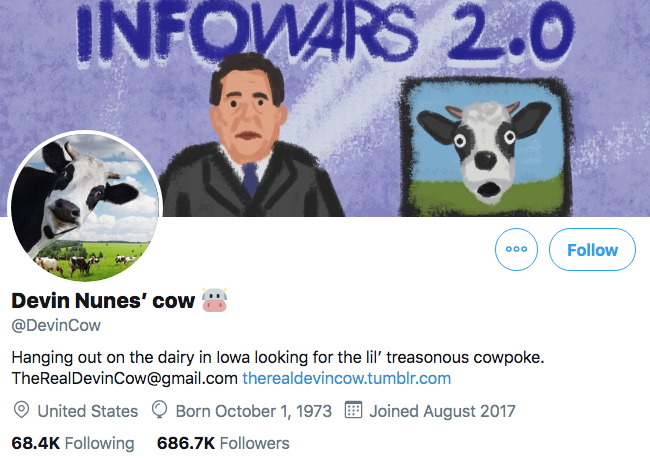 However funny it may seem for a congressman to be riled up by a parody account of a cow, there is good reason to take Nunes’ subpoena with a degree of seriousness.

“If he succeeds, government officials, large corporations, and other powerful figures will have a readymade playbook for abusing the judicial process to identify, punish, and silence their critics,” Hauss wrote.