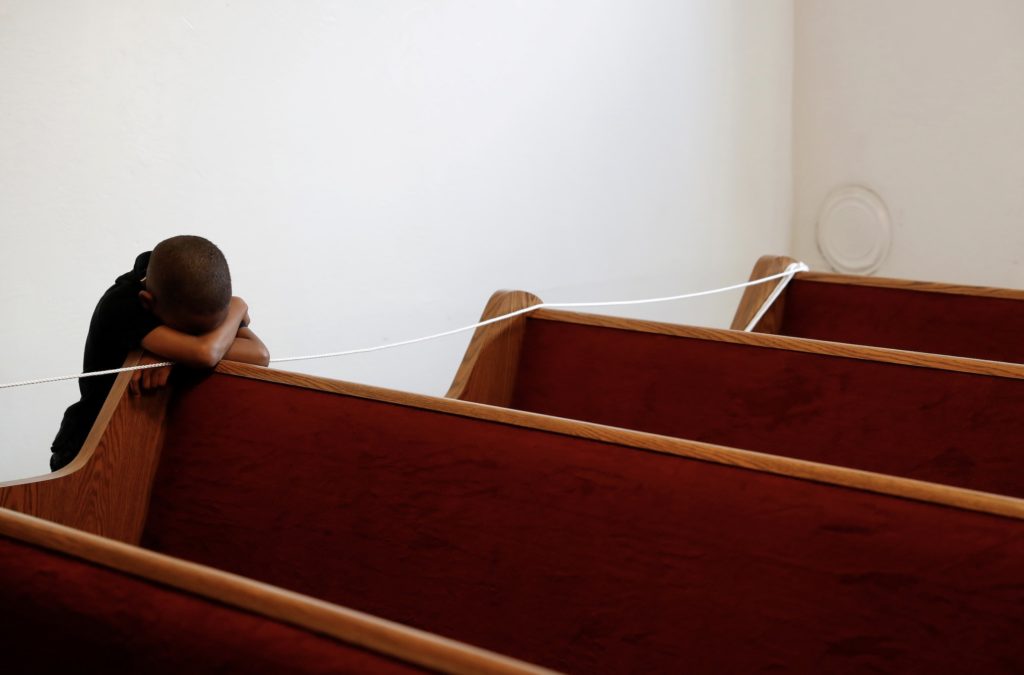 Zechariah Payton, 5, puts his head down on an empty pew, on the third day of California Governor Gavin Newsom’s implemented statewide “stay at home order” directing the state’s residents to stay in their homes in the face of the fast-spreading coronavirus disease (COVID-19), before a Facebook Live service at Rising Star Church in Oakland, California, U.S. March 22, 2020. REUTERS/Shannon Stapleton

As state and local governments look to slow down the spread of the coronavirus by restricting individual mobility, including limits on large gatherings, some people have pushed back, citing their First Amendment right to assemble.

In New Hampshire, where over one-hundred people have tested positive for COVID-19 as of March 23rd, three people who had planned to attend political and religious events filed a complaint last week asking for an immediate order halting the governor’s ban on gatherings of over 50 people.

“We can choose to assemble if that is our desire. What cannot occur is one man in a position of power deciding to strip us of our rights in the name of safety and without due process,” one of the plaintiffs said in a press release.

“It is clear from the factual conclusions … that this is an extraordinary public health crisis and the danger to the citizens of New Hampshire, the country and the world is real and it is imminent,” Kissinger said, according to the New Hampshire Union Leader. He also said that the court could not “imagine a more critical public objective than protecting the citizens of this state and this country from becoming sick and dying from this pandemic.”

Elizabeth Goitein, director of the Brennan Center for Justice’s Liberty and National Security program, explained why limitations on large gatherings, even when those gatherings are political or religious in nature, are likely to be upheld in court.

“The state has leeway even under the First Amendment to determine the time, place and manner of assembly, and it also can impose restrictions that are narrowly tailored to further a significant interest. In a public health crisis like this, these restrictions could include prohibiting gatherings of a certain size,” Goitein said in a phone call.

“These would have to be content-neutral restrictions. They couldn’t restrict political protest while not restricting, say, a business gathering of the same size,” Goitein said, adding that the restrictions couldn’t discriminate on the basis of such things as race or ideology.

However, as public officials are pressured to implement more aggressive restrictions, including self-isolation measures, experts say that government officials might have to prove a higher standard in court.

Timothy Zick, John Marshall Professor of Government and Citizenship and Cabell Research Professor at William and Mary Law School, said it would be “conceivable” that if limitations shrunk to two people, one could equate that with an effective ban on assembly.

“In that case, you might be talking about a higher level of scrutiny for the regulation, although one the state likely will still be able to meet given the serious health concerns,” Zick said in an email.

Litigation Director at Knight First Amendment Institute at Columbia University Alex Abdo, who co-authored a report on quarantine laws effects on civil liberties for the ACLU in 2015, said officials would likely have to demonstrate the measures were necessary.

“There isn’t much precedent to turn to for guidance, but courts would very likely approve measures that public health experts say are effective and necessary to respond to the crisis.”

The fact that restrictions on large gatherings are not based on advice from a single expert, but are approved across the public health expert community should give people confidence that they are based on sound principles with public safety and health in mind, Goitein said.

“There’s a fairly impressive amount of consensus here about what is necessary and what is not necessary. If the president or your state or local governor is imposing measures that almost no public health experts are calling for, I think that’s a good signal that they’re on the wrong track,” Goitein said.