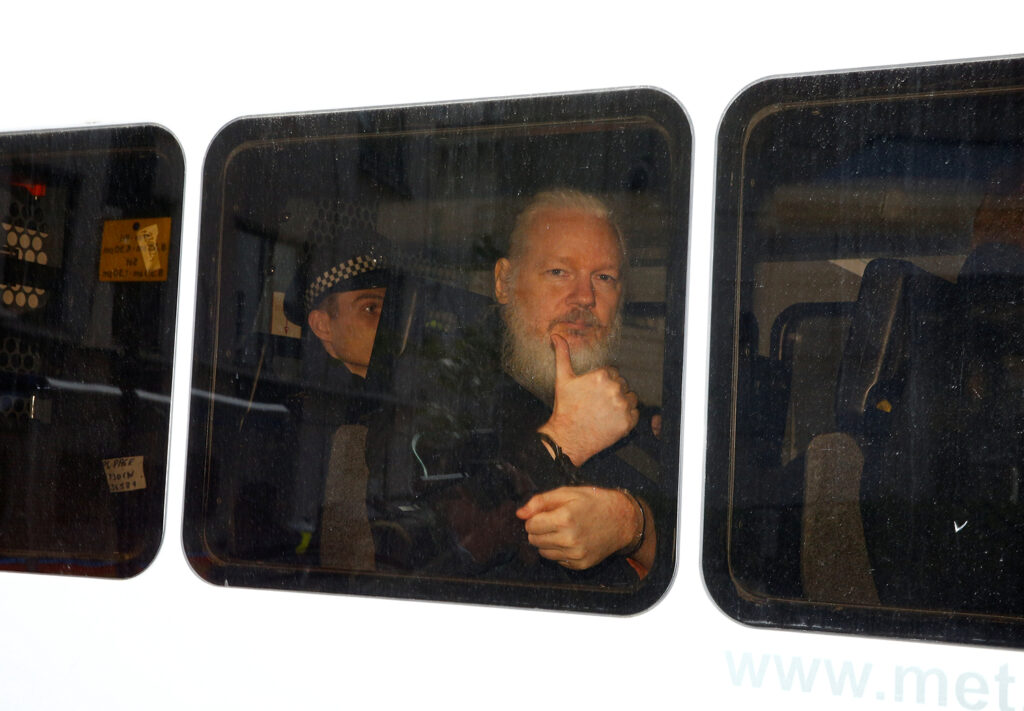 WikiLeaks founder Julian Assange is seen in a police van after he was arrested by British police outside the Ecuadorian embassy in London April 11, 2019. (Reuters/Henry Nicholls)

“Publishing is not a crime,” wrote five news organizations in a letter urging the U.S. government to drop its charges against WikiLeaks founder Julian Assange.

Assange is the first publisher in history to be charged with the World War I-era Espionage Act, igniting pushback from journalists around the world who say this could threaten press freedoms and endanger First Amendment protections.

WikiLeaks, a website known for its publishing of classified information received from anonymous sources, published a trove of national security information leaked to Assange by U.S. Army intelligence analyst Chelsea Manning in 2010.

This national defense information was also published in coordination with The Guardian, The New York Times, France’s Le Monde, Spain’s El País and Germany’s Der Spiegel, which spun off their own stories and now argue that the charges against Assange have serious First Amendment implications.

“This indictment sets a dangerous precedent, and threatens to undermine America’s First Amendment and the freedom of the press,” stated the letter published Nov. 28. “Holding governments accountable is part of the core mission of a free press in a democracy. Obtaining and disclosing sensitive information when necessary in the public interest is a core part of the daily work of journalists. If that work is criminalised, our public discourse and our democracies are made significantly weaker.”

In June 2020, the U.S. Department of Justice, (DOJ), filed a second superseding indictment against Assange in the U.S. District Court for the Eastern District of Virginia. The 18-count indictment included 17 charges under the Espionage Act of 1917, which was not utilized to charge whistleblowers for leaking information to the press until 1971 when Daniel Ellsberg was indicted for leaking the Pentagon Papers. The charges against Ellsberg were dismissed due to government misconduct.

Assange is not being prosecuted as a whistleblower or as a source. He is charged with conspiring to receive, obtaining, possessing and publishing national defense information. He is also charged with conspiracy to commit computer intrusion under the Computer Fraud and Abuse Act, (CFAA), which complicates arguments in his First Amendment defense.

Assange has been held in limbo since 2019 in the high-security Belmarsh Prison in London, as the United States has requested his extradition. If extradited, he could face up to 175 years in prison.

Wizner, who also served as principal legal adviser to NSA whistleblower Edward Snowden, says charging Assange as a publisher raises the question: “Does the First Amendment protect a publisher under these circumstances? And the answer is, we don’t know.”

The DOJ noted that these leaks included identifying information of people that aided the government “at great risk to their own safety.” Without redacting the source’s names or other identifying information, “Assange created a grave and imminent risk that the innocent people he named would suffer serious physical harm and/or arbitrary detention,” the indictment stated.

Holger Stark, who coordinated Der Spiegel’s coverage in 2010, initiated the Nov. 28 letter and said he was glad that the five original media organizations which cooperated with WikiLeaks in 2010 came together.

“For the journalists involved, Cable Gate and the War Logs from Iraq and Afghanistan were global scoops, they made headlines worldwide,” Stark wrote in an email to First Amendment Watch. “It was, in the best sense, journalism holding the powerful accountable as a watchdog. Prosecuting someone for publishing these documents is terribly wrong. It is now one of the last opportunities to intervene before Julian Assange potentially gets extradited to the U.S. It would have been just wrong not to raise our voices now.”

In 2010 after the initial classified information was published, the DOJ under the Obama administration immediately began an investigation. Chelsea Manning was arrested in May 2010 and sentenced to 35 years in prison. In June 2012, Assange sought refuge and political asylum in the Ecuadorian Embassy in London. Manning’s sentence was commuted by then-President Obama in January 2017.

According to The Washington Post, Obama’s DOJ refrained from charging Assange because it had a “New York Times problem,” meaning it had implications for other news organizations which published classified information that could also potentially be prosecuted.

But under the Trump administration this fear of press freedom implications shifted. In 2019, Ecuador revoked Assange’s asylum status after his relationship with the Ecuadorian government became hostile, and London police arrested him. The day of his arrest, the U.S. unsealed its initial indictment charging Assange with conspiracy to commit computer intrusion. Six weeks later on May 23, 2019, the DOJ added 17 additional charges and invoked the Espionage Act against the WikiLeaks founder. The June 2020 indictment is the most updated version of the charges. 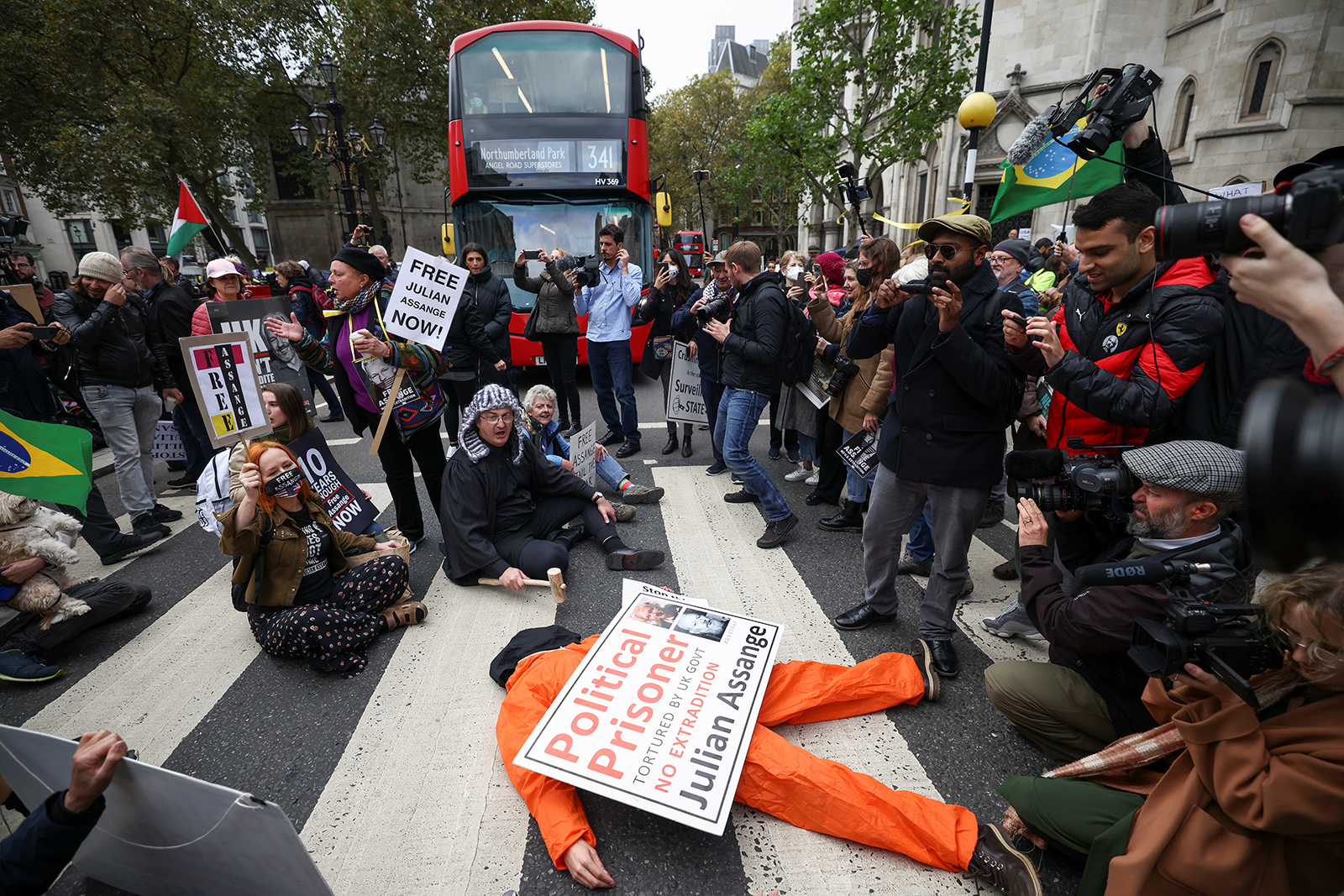 Supporters of WikiLeaks founder Julian Assange block a street during a protest outside the Royal Courts of Justice in London, Britain, Oct. 28, 2021. (Reuters/Henry Nicholls)

In announcing the additional charges, John Demers, then the Assistant Attorney General for National Security, refuted the implied press dangers by saying Assange was “no journalist,” according to The New York Times.

“It’s not easy to fashion a legal precedent that puts Assange on the criminal side and The New York Times on a different side if you actually look at the conduct and behavior,” Wizner said. “It turns out to be quite difficult to define WikiLeaks out of press protection without putting more mainstream national security investigative journalists into the government crosshairs.”

“I think that the reason why most major news organizations spoke out against the second indictment of Assange in which all of these Espionage Act charges were included, including those for publishing, is that they know that bad facts make bad law, unpopular defendants create dangerous precedents and then a conviction of Assange for publishing will put national security investigative journalism at risk,” Wizner added.

Assange has been held in Belmarsh Prison with no charges for almost four years. In January 2021, a British district judge refused the United States’ request for extradition after finding that there was a “substantial” risk that he would harm himself.

The British Supreme Court later overturned the lower court’s ruling, and the UK government ordered Assange’s extradition to the U.S. in June 2022. Assange appealed the decision in July with the first hearing expected in early 2023, according to Reuters. As of Dec. 2, Assange also submitted an appeal to the European Court of Human Rights, Reuters reported. Assange is an Australian citizen, and on Nov. 30 Australia’s Prime Minister Anthony Albanese called on President Biden’s administration to end Assange’s prosecution, The Associated Press reported.

Stella Assange, Julian’s wife, said that the “united front” of the letter from the five news organizations was great and she remains focused on the positive.

“It doesn’t just signal something to the government, it signals to the rest of the press that this is now the position,” she said. “I think that shouldn’t be underestimated.”

In the letter, the five organizations did note that “some of us are concerned about the allegations in the indictment that he [Assange] attempted to aid in computer intrusion of a classified database.”

Assange is charged with conspiracy to commit computer intrusion under the CFAA. The specific provision he’s charged with is like a “mini Espionage Act, in the sense that it covers basically hacking to access classified information,” said Gabe Rottman, director of the Technology and Press Freedom Project at the Reporters Committee for Freedom of the Press.

In the 2001 Supreme Court case Bartnicki v. Vopper, the Supreme Court held that the disclosure of illegally obtained material was protected under the First Amendment, so long as the disclosing party did not participate in the illegal retrieval of said information. That case, however, did not involve classified national security information.

In Assange’s case, Rottman says the factual scenario shifts based on the allegation that Assange allegedly conspired with Manning to access a government computer, “specifically SIPRNet, which is the network that handles secret level classified information.” The national defense information WikiLeaks published was classified up to the “secret” level.

Conspiracy law, Rottman says, requires a specific action that the DOJ can later prove aided the alleged conspiracy. In Assange’s case, this includes the allegation that he attempted to decrypt a password at Manning’s request. If this is proved, Rottman says, it could be the “kernel of a possible CFAA violation.”

During Assange’s extradition hearings in 2020, digital forensic expert and former U.S. Army criminal investigator Patrick Eller testified that the information Manning allegedly provided to Assange for the password decryption was not enough for him to crack the password successfully, nor would it have concealed Manning’s identity.

The indictment of Assange, Timm says, “is one of, if not the most direct threat to the First Amendment and press freedom in the 21st century, and it could really upend how journalism is done in this country.” The Espionage Act charges, he added, are “related to very normal and common journalistic behavior.”

The Freedom of the Press Foundation is among 21 other press freedom and human rights organizations that signed onto another letter denouncing the charges against Assange sent to Attorney General Merrick Garland Dec. 8.

“We believe that the prosecution of Assange in the U.S. would set a harmful legal precedent and deliver a damaging blow to press freedom by opening the way for journalists to be tried under the Espionage Act if they receive classified material from whistleblowers,” the letter stated.

This stand from media organizations comes at a time when press rights are at the forefront of legislation and policy in the United States.

Passed unanimously in the U.S. House of Representatives in September, the Protect Reporters from Exploitative State Spying, or PRESS Act, would “create a privilege for journalists that shields them from being forced to reveal protected information, including about confidential sources,” according to the Reporters Committee.

In October, Attorney General Garland announced a revised news media policy that bars the DOJ from using subpoenas or other legal processes against journalists to obtain information they’ve retrieved while newsgathering.

But Timm says it’s important to remember that this new set of guidelines is not law. The guidelines don’t define whether Assange would qualify as a journalist who gathered classified information and later published it, as the Attorney General makes that distinction, Timm said.

See our Deep Dive: Are WikiLeaks’ Actions Protected by the First Amendment? 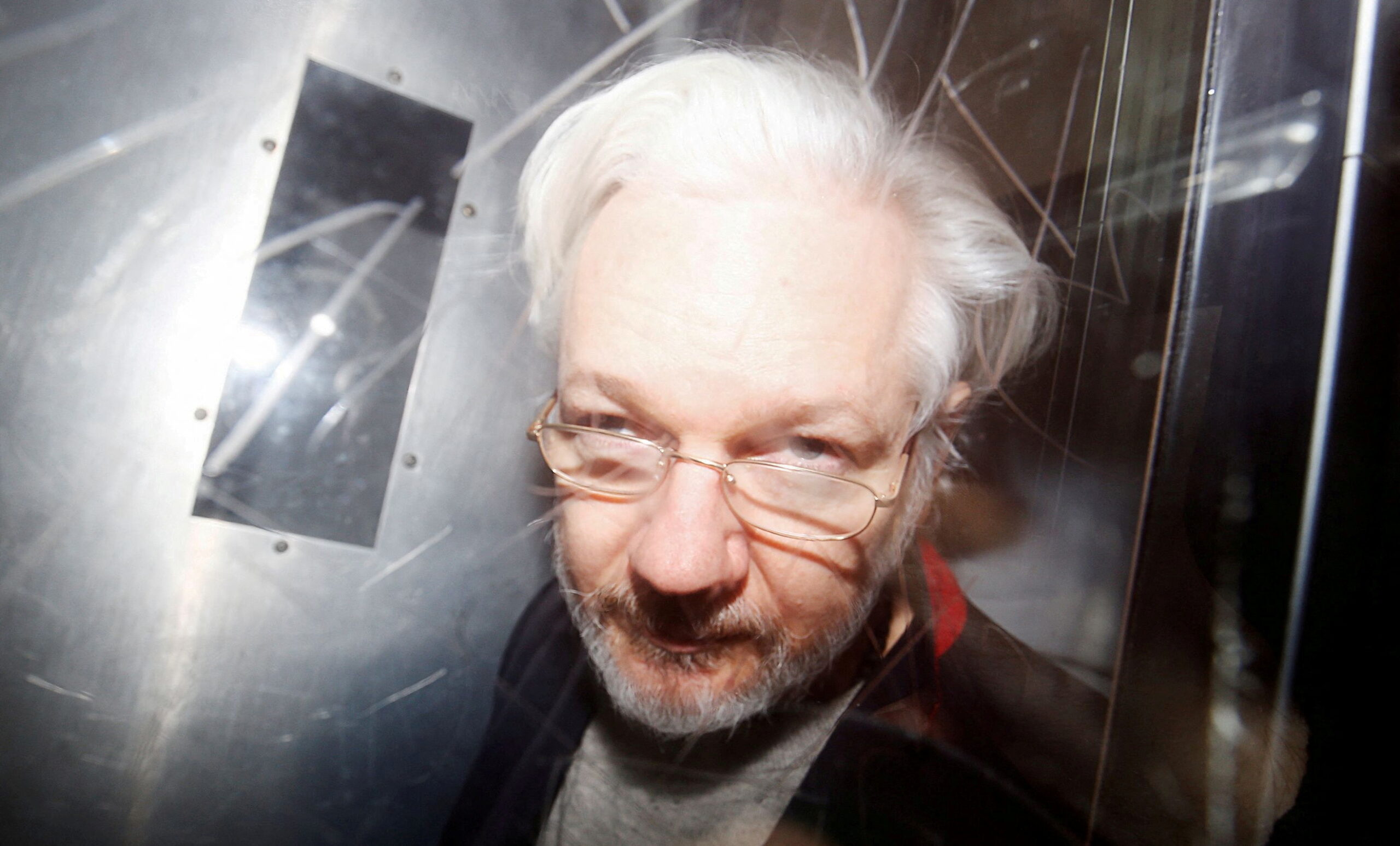