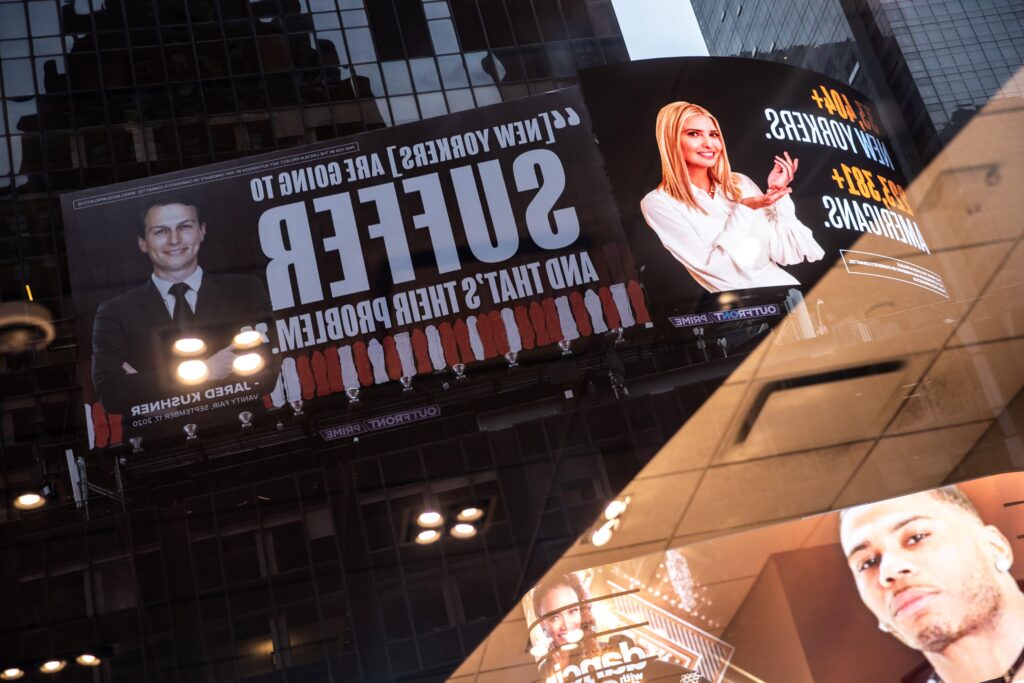 Images of Ivanka Trump and Jared Kushner are reflected on a window alongside messages about coronavirus disease (COVID-19) infections and deaths on billboards sponsored by The Lincoln Project above Times Square in New York City, U.S. October 24, 2020. REUTERS/Jeenah Moon

In a letter sent on October 23rd, Marc Kasowitz, the lawyer representing the couple, called the advertisements “false, malicious, and defamatory,” and threatened to sue the group for libel if they don’t take them down.

One billboard features an edited photo of Ivanka Trump smiling next to the total number of COVID deaths in New York and the United States. The second includes a photo of Kushner along with a quote from a Vanity Fair article that was attributed him by an anonymous source: “[New Yorkers] are going to suffer and that’s their problem.” Underneath the quote is a line of body bags.

“Of course, Mr. Kushner never made any such statement, Ms. Trump never made any such gesture, and the Lincoln Project’s representations that they did are an outrageous and shameful libel. If these billboard ads are not immediately removed, we will sue you for what will doubtless be enormous compensatory and punitive damages,” Kasowitz warned in his letter.

The Lincoln Project quickly dismissed the threats in an email sent to Ms. Trump and Kushner on October 24th. In the email, the group’s lawyers cite the U.S. Supreme Court’s decision in New York Times v. Sullivan (1964), the landmark ruling that guaranteed the First Amendment right to criticize public officials.

“Americans have the right to discuss and criticize their public officials freely. The U.S. Supreme Court has described this as a ‘profound national commitment to the principles that debate on public issues should be uninhibited, robust, and wide-open, and that it may well include vehement, casting and sometimes unpleasantly sharp attacks on government and public officials’,” the lawyers wrote.

See also: How Trump and Nunes Use Defamation Lawsuits To Silence Their Critics

Howard M. Wasserman, an associate dean and professor of law at Florida International University, explained in a blogpost why he thought the billboards were protected under the First Amendment.

“The billboards imply callous disregard for COVID deaths, which is non-actionable opinion. The quotation from Jared comes from a Vanity Fair article about the administration’s COVID response. The full statement is that New York Governor Andrew Cuomo did not do enough to get PPE, so “his people are going to suffer and that’s their problem.” It is at least ambiguous whether “their” refers to Cuomo or “his people” (meaning New Yorkers); so even if it leaves a false impression, it does not rise to actual malice. The juxtaposition of their photos with body bags and death tolls is hyperbole. And again, these are government officials,” Wasserman wrote.

On Twitter, Ken White (@Popehat) called the defamation claim “abusively frivolous” adding that “Trump Trumpalo— which includes some people who fancy themselves “free speech advocates’ — subscribes to the theory that (1) anything negative said about their friends is defamatory, (2) nothing their friends say is defamatory, and (3) bogus defamation claims to harass are fine’.” White is a First Amendment litigator and criminal defense attorney at Brown White & Osborn LLP.

Ms. Trump and Kushner have not yet responded to The Lincoln Project’s email.