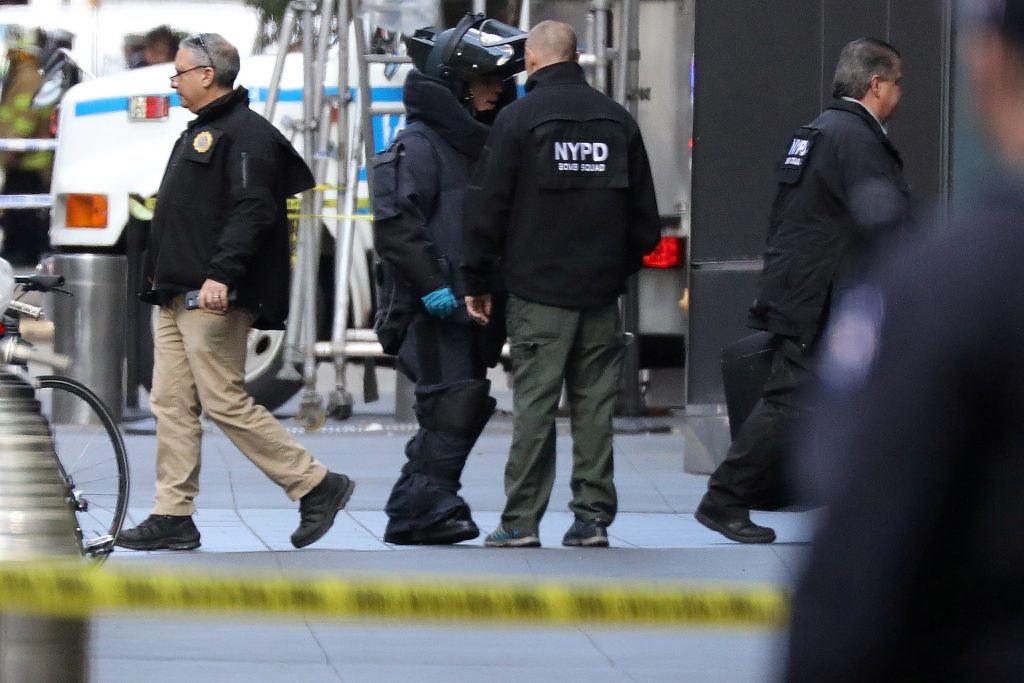 A member of the New York Police Department bomb squad is pictured outside the Time Warner Center in the Manhattan borough of New York City after a suspicious package was found inside the CNN Headquarters in New York, U.S., October 24, 2018. REUTERS/Kevin Coombs

We — all of us, Americans and others around the world — will not be silenced by bombs, bombast or even murder.

The lowlife(s) behind the spate of pipe bombs sent to prominent critics of President Trump and his administration are engaged in a futile, juvenile attempt to punish a group of former public servants and private citizens, while trying to send a chilling message to all of us: “Speak out ‘the wrong way’ and you will die.”

Message back: No luck, pal. Free expression in its many forms wins out every time. You’ve already failed.

At any given moment in history, people like you have misunderstood the role of the dissident and the need for the robust and sometimes discomforting discourse that flows through this nation each day, and around the world.

Every generation, particularly at times of stress, has seen attempts by individual despots and nations to silence the “other,” the acidic critic or the harsh political opponent.

Just a few years after the U.S. adopted the First Amendment in 1791 as part of the Bill of Rights, Congress and President John Adams attempted to silence critics — arresting some dozen and a half editors. How’d that work out? Failed within a few years.

In 1837, Elijah Parish Lovejoy, a Presbyterian minister, abolitionist and newspaper editor, was killed in Illinois by a pro-slavery mob. President Lincoln jailed pro-South editors during the Civil War for their views. Modern-era pogroms in the name of patriotism, from the “Red Scare” following World War I to the McCarthyism panic of the 1950s, destroyed some careers and asked Americans to betray each other because some held contrarian views. Protesters throughout history have tried to shout down or shout over those they oppose. They failed.

If you think this latest round of attacks, as dangerous and sad and reprehensible as it is, will quiet a free people, guess again.

In 1971, the radical “Weatherman” group bombed the U.S. Capitol — as did another such group in 1983. In 1954, a group of Puerto Rican separatists broke into the House of Representatives and opened fire with handguns, wounding five Congressmen. But still, we spoke, wrote, assembled and petitioned for the “redress of grievances” on a wide set of issues.

An insane person’s attempt to kill GOP members of Congress in 2017 at an early morning softball practice session in Washington, D.C., did not shut down our First Amendment rights. Nor did a 2011 shooter’s attack on then-Democratic Rep. Gabrielle Gifford in Arizona.

Admittedly, some free speech tests the limits of taste, believability or even fiction. Conservative conspiracy theorists and talk show hosts wasted little time in speculating that the mailed explosives are connected to various plots and plans by liberals — from “false flag ops, because that’s what they do” — to calculated October political maneuvering. Trump attempted to blame the news media and Democrats for the bombs sent to each critic — a bizarre, unsupported, knee-jerk theory that is much more politics than anything else.

But free speech protects the expression of silly or self-serving ideas as well as good ones. And when the “adults in the room” (the FBI, NYPD, ATF and others) find the real culprits, the accountability factor built into public commentary will enable us to discern “mis” and “dis” from actual information and facts.

Those who believe Trump is a threat to democracy continue to speak. And in like manner, those who defend Trump appear daily in the public square, from boisterous-if-repetitive rallies to “Fox & Friends.”

Even the murder of Washington Post contributing journalist Jamal Khashoggi by Saudi thugs has not silenced those who would speak freely. Nor have the multiple murders of journalists around the world every year. In war-ravaged Syria, news continues to flow, sometimes from towns reduced to mere rubble.

Opposing views do not mean compromise, accommodation and respect are unreachable. Engagement is not endorsement. Free speech is the engine that over time has and does drive positive change. Want examples? The modern civil rights movement. The women’s suffrage movement. The LBGTQ movement. The pro-life and pro-choice movements.

Groups in our society for more than 225 years — immigrants, abolitionists, pro- and anti-gun advocates, labor union advocates, conservatives and liberal alike — have used First Amendment freedoms to speak their minds and enlist fellow citizens to their views.

You think a few pipe bombs could do away with all that? Pathetic.