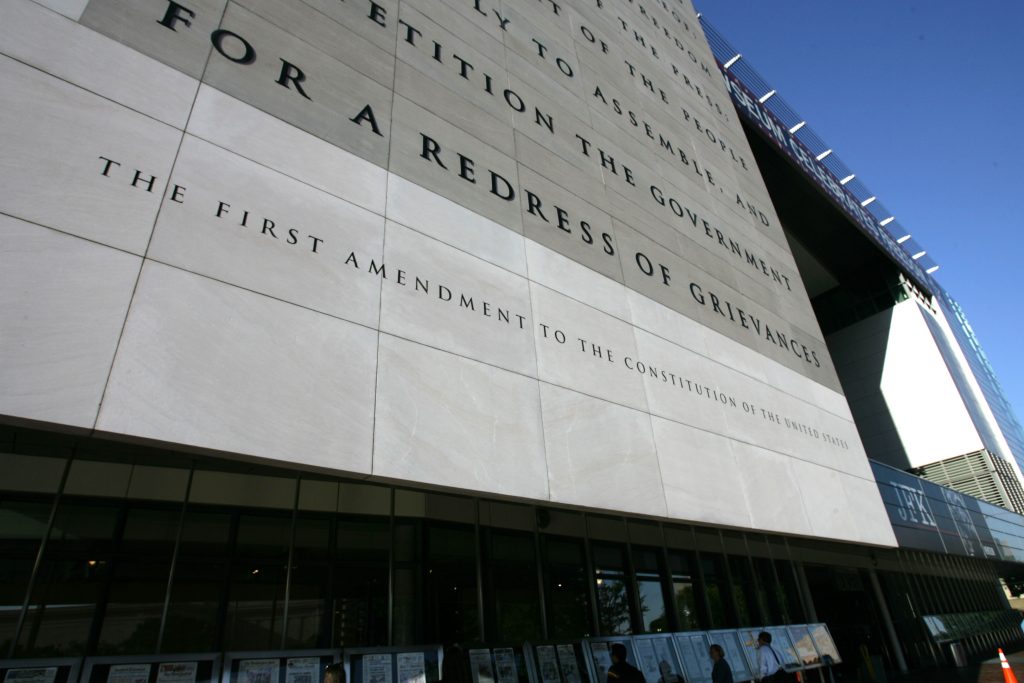 With controversies swirling daily about the freedom of speech and press, what is the state of public support for the First Amendment? Several nonprofit organizations—the Newseum First Amendment Institute, the Brookings Institution, and the Knight Foundation—conduct surveys of public attitudes about the freedom of expression. Most recently, the Newseum Institute has also initiated a First Amendment Report Card, enlisting a panel of 15 experts to assess the current state of each of the five freedoms of the First Amendment. They assign letter grades on a quarterly basis (beware: there is no grade inflation here). For the latest polls read on.

How is the health of the First Amendment amidst a divisive political climate? It’s taking a battering, according to a diverse panel of experts, who evaluated its state of health as a C+ in the fall of 2017.

The Newseum Institute First Amendment Center produces a “report card” every quarter on the current state of each of the five freedoms guaranteed by the First Amendment—religion, speech, press, assembly, and petition. The panel of experts provides a letter grade and commentary for each of the freedoms. Lucy Dalglish, dean of the Philip Merrill College of Journalism at the University of Maryland, wrote this about the freedom of speech: “College campuses, once relied upon as a marketplace of ideas, have become intolerant. Every slight or offense has been labeled ‘hate speech.’” Grades were low on free speech even though some panelists cited cases in which the Supreme Court had recently declared unconstitutional a law banning offensive trademarks (Matal v. Tam) and found that access to social media is a right protected by the First Amendment (Packingham v. North Carolina).

State of the First Amendment

Americans consider fake news more objectionable than hate speech on social media, though both are opposed by large majorities, according to a survey by the Newseum Institute First Amendment Center.  But even with the high level of concern, most Americans did not support the ability for government to require the companies to remove the objectionable content. Three out of four Americans are supportive of the First Amendment and its freedoms, although more than a third of respondents could not name a single freedom protected by the constitution, and another third could only name one.  The survey also showed a large portion of Americans holding the belief that journalists must disclose conflicts of interest, a divisive view of freedom of religion, and took a deeper look at controversial college campus speakers. Overall, the survey showed that despite the unfamiliarity most Americans have with First Amendment freedoms, they have strong opinions about issues that arise in the news, on campuses and online.

State of the First Amendment 2018

Support for the First Amendment remained strong during the past year, according to an annual survey by the Newseum Institute First Amendment Center. The poll of 1,009 American adults in May 2017 found that 68.6 percent of respondents voiced disagreement with the statement that the First Amendment goes too far in guaranteeing the rights of religion, speech, press, assembly, and petition. But responses to specific issues showed a lower level of support. Forty-three percent agreed that colleges should have the right to ban extreme campus speakers. And about 68 percent disagreed with the statement that journalists should be protected in publishing classified information provided by someone who had obtained it illegally. Lata Nott, executive director of the First Amendment Center, said that it was “troubling that even people who support the First Amendment in the abstract often dislike it when it’s applied in real life.”

State of the First Amendment 2017

In a recent Brookings survey of current undergraduate students at U.S. four-year colleges and universities, researchers found that “Freedom of expression is deeply imperiled on U.S. campuses.” Regarding the recent protests over controversial campus speakers, the survey indicated “a very significant fraction of students, across all categories, believe it is acceptable to silence (by shouting) a speaker they find offensive.” This reflects back on a weak understanding of First Amendment protections. What is to be done? John Villasenor, Nonresident Senior Fellow of Governance Studies, Center for Technology Innovation at Brookings writes, “we can do a better job of giving [students] a fuller explanation of the scope of the First Amendment, and the fact that it protects the expression of offensive views.”

Future of the First Amendment

A survey of 12,000 high school students in the spring of 2016 found increasing support for First Amendment freedoms. Even as many of their elders on college campuses shut down controversial speakers, 91 percent of high school students agreed that people had the right to “express unpopular opinions,” compared to 83 percent 12 years earlier. However, in a response that should trouble traditional journalism organizations, 55 percent of the students surveyed said they trusted accounts of news on social media equally or more so than news from traditional newspaper or television news stations.