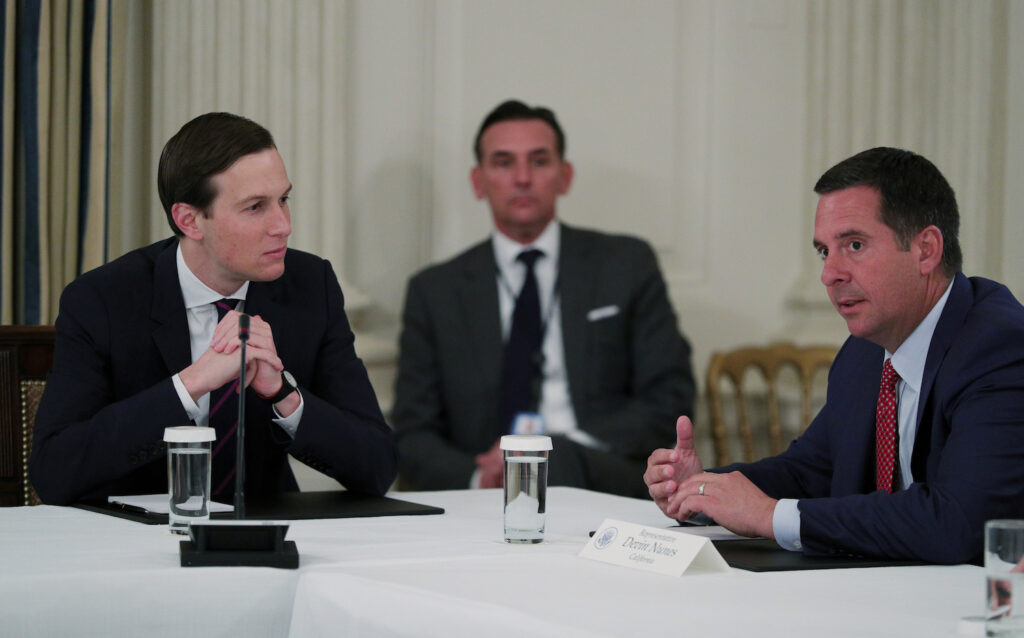 Senior advisor to the president Jared Kushner speaks with U.S. Rep. Devin Nunes (R-CA) as U.S. President Donald Trump holds a meeting with Republican members of Congress in the State Dining Room at the White House in Washington, U.S., May 8, 2020. REUTERS/Tom Brenner

On February 19th, a New York federal judge dismissed a defamation suit filed by California Representative Devin Nunes against CNN on the grounds that the congressman failed to state adequate claims and request a retraction before he filed the lawsuit.

Filed in 2019, Nunes’ lawsuit accused CNN of defaming him in a November 2019 article about a trip he took in 2018 to Vienna, Austria. The article relied heavily on information provided by Lev Parnas, an associate of Rudy Giuliani who was indicted on campaign-finance charges in 2019, and his attorney, Joseph A. Bondy. At the time, Bondy claimed that Parnas was willing to testify to Congress that Nunes had traveled to Vienna to meet with the ex-Ukranian official who had dirt on then-presidential candidate Joe Biden.

According to the story, CNN reached out to Nunes for comment before the article was published but he declined the invitation.

Eleven days after the story was published, Nunes sued CNN for defamation and requested over $435 million in damages. Nunes claimed that he did not go to Vienna in 2018, that he had ever met with the ex-Ukranian official, and that he never communicated with Parnas. The lawsuit accused CNN and its reporters of purposefully publishing false information in order to “inflict maximum damage to Plaintiff’s reputation worldwide.”

In her ruling, U.S. District Judge Laura Taylor Swain dismissed Nunes’ for failing to show how the article harmed his reputation or finances.

“While the [Amended Complaint] uses the phrase ‘special damages,’ refers to ‘out of pocket expenses,’ and includes a dollar amount that encompasses the entire array of damages claims, it provides no further indication of the basis or quantum of any special, or economic, element of his damages claim,” Swain wrote.

Swain also noted that Nunes failed to request a retraction before he filed his lawsuit. Here, the judge applied California law because, as a congressman representing that state, it would be where Nunes would suffer the greatest reputational harm. California defamation law requires plaintiffs to request a retraction within 20 days “after the knowledge of the publication or broadcast of the statements claimed to be libelous.”

The Virginia judge also warned Nunes and his lawyer, Steven Biss, against forum shopping” a term used for attorneys who strategically file cases in certain courts because they think they’ll get a more favorable outcome.

In less than two years, Nunes has filed eight defamation lawsuits against media companies and private individuals. Though many of these suits will likely fail to meet the high standards required by U.S. defamation law, they can still be costly and time-consuming for the people targeted. Smaller newspapers may opt to self-censor rather than risk attracting an expensive lawsuit, even if the story is backed by solid evidence.