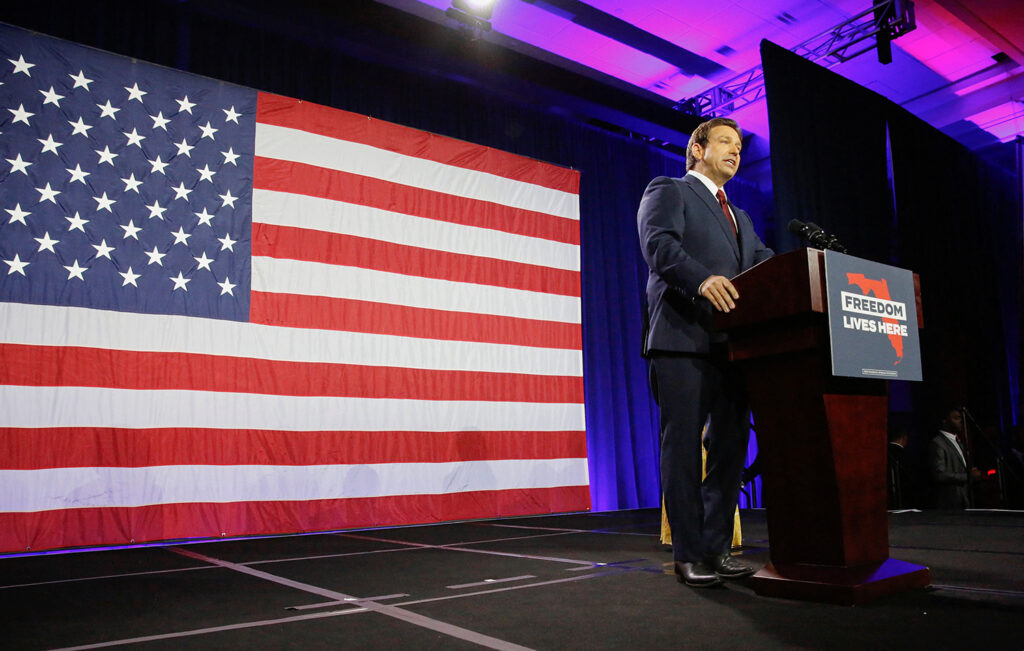 The “Stop Wrongs Against Our Kids and Employees” Act, coined the “Stop WOKE” Act by DeSantis, went into effect July 1. The academic provision of the law sought to bar certain discussions in public university and college classrooms, specifically those centered around racism and gender, according to an Aug. 18 complaint filed by the American Civil Liberties Union, (ACLU), the ACLU of Florida and the NAACP Legal Defense Fund on behalf of seven professors and a student.

“The law officially bans professors from expressing disfavored viewpoints in university classrooms while permitting unfettered expression of the opposite viewpoints,” wrote Judge Walker in the 139-page order filed in the U.S. District Court for the Northern District of Florida. “Defendants argue that, under this Act, professors enjoy ‘academic freedom’ so long as they express only those viewpoints of which the State approves. This is positively dystopian. It should go without saying that ‘[i]f liberty means anything at all it means the right to tell people what they do not want to hear.”

The complaint alleged that the state was engaging in viewpoint discrimination because the act would prohibit teachings and discussions about which the state doesn’t agree. Florida proved this in its response to the complaint, in which it claimed that public university professors’ speech is “government speech” and is subjected to the “guidance of the State’s elected officials.”

“It should go without saying that enacting a prophylactic ban on protected expression of certain viewpoints—in the interest of suppressing those viewpoints because the State of Florida finds them ‘repugnant’—is neither sufficiently weighty nor reasonable,” Judge Walker stated.

The prohibited concepts that are central to the Stop WOKE Act’s academic clause are a result of the amended Florida Education Equity Act, which bans discrimination of students or public school employees based on demographic and personal information. But the eight new forbidden concepts sought to prohibit certain discussions and lessons that center around race, color, sex or national origin.

Judge Walker notes that the law is “antithetical to academic freedom and has cast a leaden pall of orthodoxy over Florida’s state universities. Neither the State of Florida’s authority to regulate public school curriculum, nor its interest in preventing race or sex discrimination can support its weight. Nor does the First Amendment tolerate it.”

The Stop WOKE Act states that these race and gender-based discussions can occur, but that educators must teach them in “an objective manner without endorsement” of the prohibited concepts.

This “objective” aspect of the provision was described as “utterly ambiguous” by Judge Walker and thus in violation of the Due Process Clause of the Fourteenth Amendment. He added that Florida “redefined ‘objectivity’ in a manner that does not comport with common sense. No ordinary person would understand ‘objective’ instruction to allow for this imbalance.”

Jerry Edwards, staff attorney with the ACLU of Florida, said that “the ability to have honest and open discussions about our history and its impact on Black and Brown communities is crucial to our democracy,” according to a press release. “When we better understand our country’s past and failures, we allow ourselves the opportunity to pave a better future for all.”

The multi-racial group of plaintiffs in the lawsuit each cited different reasons why the education clause in the Stop WOKE Act would impact their teaching styles and learning environments. Professors across the state feared retaliation if they spoke out against the act, but others were outraged.

Dr. Dana Thompson Dorsey, a plaintiff in the suit and an associate professor at the University of South Florida, was not afraid of retaliation.

“I am not going backwards and I’m not going to have my children and grandchildren live in a world where they can’t freely speak their peace,” Thompson Dorsey said in an October interview with First Amendment Watch.

The complaint by the ACLU and NAACP Legal Defense Fund was not the only one filed against the academic clause. Another lawsuit filed by the Foundation for Individual Rights and Expression on behalf of a professor and student was also successful in the ruling. Since the two cases had similar First Amendment implications and both requested a preliminary injunction against the academic clause, Judge Walker ruled on them concurrently.

“One thing is crystal clear—both robust intellectual inquiry and democracy require light to thrive. Our professors are critical to a healthy democracy, and the State of Florida’s decision to choose which viewpoints are worthy of illumination and which must remain in the shadows has implications for us all,” Judge Walker wrote.

“If our ‘priests of democracy’ are not allowed to shed light on challenging ideas, then democracy will die in darkness,” he added. “But the First Amendment does not permit the State of Florida to muzzle its university professors, impose its own orthodoxy viewpoints, and cast us all into the dark.”