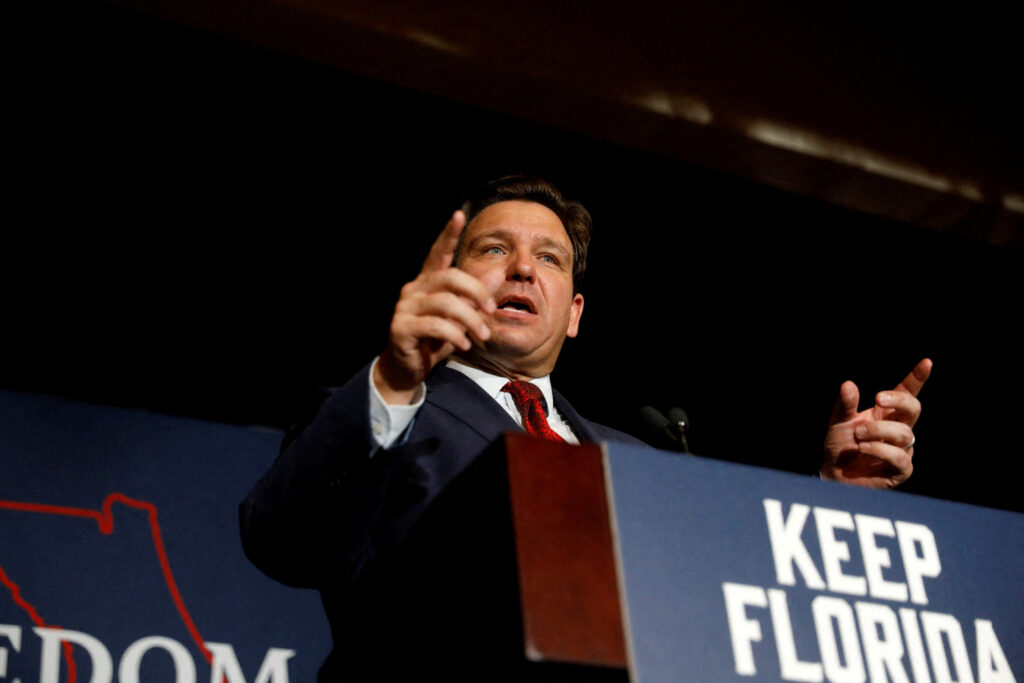 In a Reuters file photo, Florida Gov. Ron DeSantis speaks after the primary election for the midterms during the “Keep Florida Free Tour” at Pepin’s Hospitality Centre in Tampa, Florida, Aug. 24, 2022. (Reuters/Octavio Jones)

The “Stop Wrongs Against Our Kids and Employees” Act, coined “Stop WOKE” Act by Florida Gov. Ron DeSantis, went into effect July 1. The restricted classroom discussions can be centered around civil rights, “privilege,” “oppression,” and “systemic racism,” according to a complaint against the act filed by the American Civil Liberties Union, (ACLU), the ACLU of Florida and the NAACP Legal Defense Fund Aug. 18.

According to Andrew Gothard, president of United Faculty of Florida, (UFF), a union of more than 25,000 faculty members in all levels of education across the state, “there’s a lot of fear among faculty right now, but there’s also a lot of desire to fight and that’s what we’re doing at UFF.”

“I do feel confident saying that the entire higher education community is up in arms about this,” he added.

The complaint alleges that the state is engaged in viewpoint discrimination because the act would prohibit teachings and discussions about which the state doesn’t agree.

On Sept. 22, Florida filed its response in opposition to the request for a preliminary injunction, as well as a motion to dismiss. In its filing, the state claimed that public university professors’ speech is “government speech,” which only increased dissent from educators.

Chief Judge Mark Walker of the U.S. District Court for the Northern District of Florida held a hearing Oct. 13 to discuss both the plaintiffs’ request for a preliminary injunction, and Florida’s motion to dismiss. Judge Walker previously declared the act’s employment provision unconstitutional.

According to Jerry Edwards, staff attorney with the ACLU of Florida, Judge Walker did not rule on either issue at the hearing, and said it may take a few weeks for him to issue a written opinion with his ruling.

“At this point, we wait and see what the ruling is. That’ll determine the next steps,” Edwards said in an email to First Amendment Watch Oct. 18.

First Amendment Watch reached out to the Florida Commissioner of Education Manny Díaz, Jr. but the department press secretary responded in an email that they do “not comment on matters pertaining to ongoing litigation.”

The state’s response to the complaint stated that the curriculum of public universities is “set by the university in accordance with the structure and guidance of the State’s elected officials. It is government speech.”

One of the plaintiffs, Dr. Jennifer Sandoval, a tenured associate professor at the University of Central Florida, described this as a “bad faith argument,” and added that educators share their expertise, education and knowledge with their students to enhance conversation and push them to ask the “tough questions.”

“To say we’re a part of a political mechanism is patently false,” she said.

The 2006 Supreme Court decision in Garcetti v. Ceballos found that when “public employees make statements pursuant to their official duties, the employees are not speaking as citizens for First Amendment purposes.”

Florida cited Garcetti in its argument, stating that “the in-class instruction offered by state-employed educators is also pure government speech, not the speech of the educators themselves.”

The Supreme Court, however, noted that while there is some debate surrounding whether or not classroom instruction and discussion is subject to to the Garcetti opinion, they are “not fully accounted for by this Court’s customary employee-speech jurisprudence.”

“We need not, and for that reason do not, decide whether the analysis we conduct today would apply in the same manner to a case involving speech related to scholarship or teaching,” the opinion stated.

Edwards said that Garcetti may have led to some questions regarding its application to public education, but in his opinion the court “carved out professors and universities” from the decision.

Florida responded that since public university professors are state employees, they cannot “espouse in the classroom concepts prohibited by the Act, while they are on the State clock, in exchange for a State paycheck.”

The prohibited concepts that are central to the Stop WOKE Act’s academic clause are a result of the amended Florida Education Equity Act, which bans discrimination of students or public school employees based on demographic and personal information. But the eight new forbidden concepts would bar certain discussions and lessons that center around race, color, sex or national origin.

According to the complaint, the concepts would bar “instructors and students from expressing viewpoints disfavored by the Florida legislature on a range of topics, including systemic racism and sexism.”

“We are not going to use your tax dollars to teach our kids to hate this country or to hate each other,” DeSantis said at the bill signing in April. “Freedom from indoctrination is a central tenet of what it means to be a free citizen in the free state of Florida and we’re proud to take action.”

Florida argued that under the First Amendment, the state is not compelled “to pay educators to advocate ideas, in its name, that it finds repugnant,” the response stated. “Nor does it anoint individual professors as universities unto themselves, at liberty to indoctrinate college students in whatever views they please, no matter how contrary to the university’s curriculum or how noxious to the people of Florida.”

Edwards says that the state should not be involved in the debate of ideas on college campuses.

“We consider this to be a particularly egregious attack on free speech, particularly on college campuses,” Edwards said. “It’s important for professors to be able to have open and robust debate in their classrooms and to be able to address topics whether or not the state agrees with them. We should not have the state government telling professors what is and isn’t acceptable in teaching their areas of expertise.”

Florida’s Stop WOKE Act has been at the forefront of free speech pushback, igniting opposition from educators and students.

Seven professors and one student from six different public universities across Florida signed onto the complaint, each citing different reasons why the education clause in the Stop WOKE Act would impact their teaching styles and learning environments.

Sandoval said she signed onto the complaint to push back against the idea that universities are a space of indoctrination and not a space of critical thinking.

“My goal is always to maintain academic freedom and the First Amendment in this space,” she said.

Leah Watson, senior staff attorney with the ACLU’s Racial Justice Program, said that the state of Florida had “asserted a broad right to regulate and censor all speech in universities and that runs contrary to academic freedom on public university and college campuses.”

The Stop WOKE Act states that these race and gender-based discussions can occur, but that educators must teach them in “an objective manner without endorsement” of the prohibited concepts.

Dr. Russell Almond, a plaintiff in the suit and an associate professor at Florida State University, said that the state’s assumption that teaching these topics means a professor endorses them is rooted in the way people may view what is true, and what is not.

Almond said that in his opinion, the state government believes that if a professor introduces a topic in class, they’re “using our authority as professors to tell you it is true. That is not the case.”

In Florida, tenured professors are reviewed every five years. And in standing against the Stop WOKE Act, some professors, especially those without tenure, are fearful of retaliation. The retaliation against professors is not only reflected in possible termination, but the law allows the state to withhold funding from public universities if they do not enforce the act.

University of Central Florida Provost and Executive Vice President for Academic Affairs Michael Johnson discussed the ramifications of the act in his monthly update to the faculty in July.

“The law has very serious consequences,” Johnson said. “If the university ignored violations, or permitted them to continue, the law puts us at risk of losing $32 million of our state funding, what I would describe as a catastrophic amount.”

But Dr. Dana Thompson Dorsey, another plaintiff in the suit and an associate professor at the University of South Florida, is not afraid of any retaliation or her tenure status.

“These are my rights that many of my ancestors died for and some never had the right to speak freely or express themselves politically through voting,” Thompson Dorsey said. “I am not going backwards and I’m not going to have my children and grandchildren live in a world where they can’t freely speak their peace.”