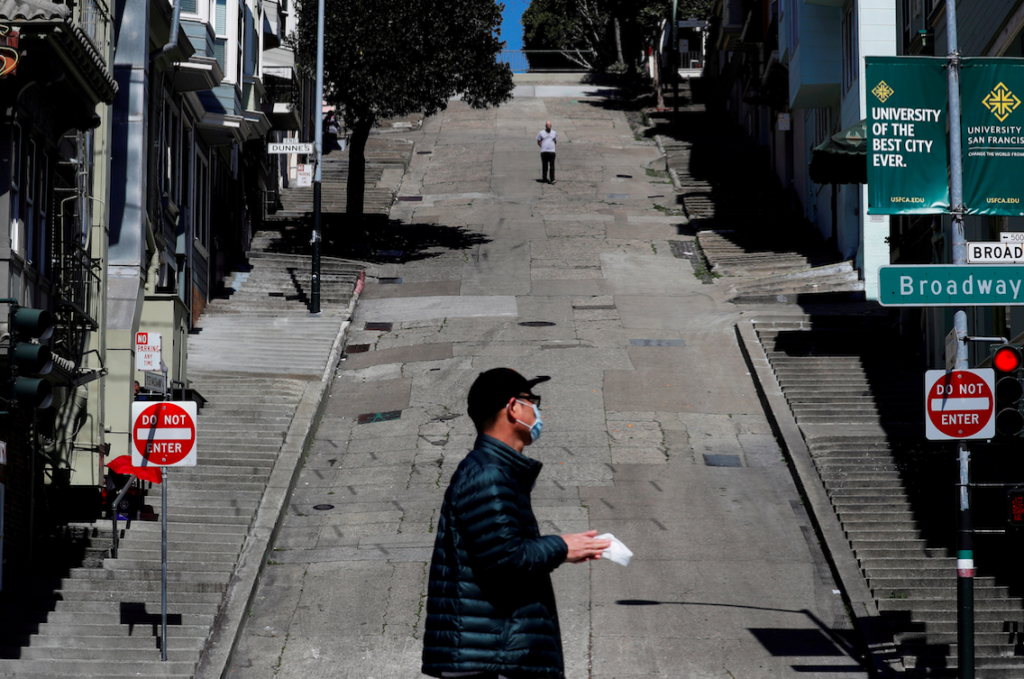 People walk on the streets, a day after California’s Governor Gavin Newsom implemented a statewide “stay at home order” directing the state’s nearly 40 million residents to stay in their homes for the foreseeable future in the face of the fast-spreading coronavirus disease (COVID-19), in San Francisco, California, U.S. March 20, 2020. REUTERS/Shannon Stapleton

Two California residents who were denied protest permits are suing Governor Gavin Newsom over his stay-at-home order which they claim violates their First Amendment rights to freedom of speech, petition, and assembly.

According to the complaint, Ron Givens, a member of the Sacramento Gun Club, and Christine Bish, a real estate agent and a Republican candidate for Congress, both filed requests in April to hold separate protests outside of the state Capitol. Givens wanted to hold a rally to protest the state’s delay in processing firearm background checks, and Bish wanted to hold a demonstration against the governor’s stay-at-home orders.

In their applications to the California Highway Patrol, the government agency responsible for approving protest permits, Givens and Bish wrote that they planned to practice social distancing during their respective demonstrations. For example, Givens claimed he specifically requested the entire State Capitol Building grounds so that there would be sufficient space for protesters to keep apart.

According to the complaint, both permit applications were denied because protests were not allowed under the current stay-at-home order.

“By banning protests generally, and denying Givens’ permit specifically, Defendants have deprived Givens of the opportunity for airing his grievances against the government, including the State’s failure to conduct timely background checks for those wishing to purchase a gun and restrictions on speech activities,” the complaint argues.

The residents are requesting a judgement declaring the stay-at-home order, as applied to them, unconstitutional, as well as a permanent order prohibiting the governor from obstructing protests.