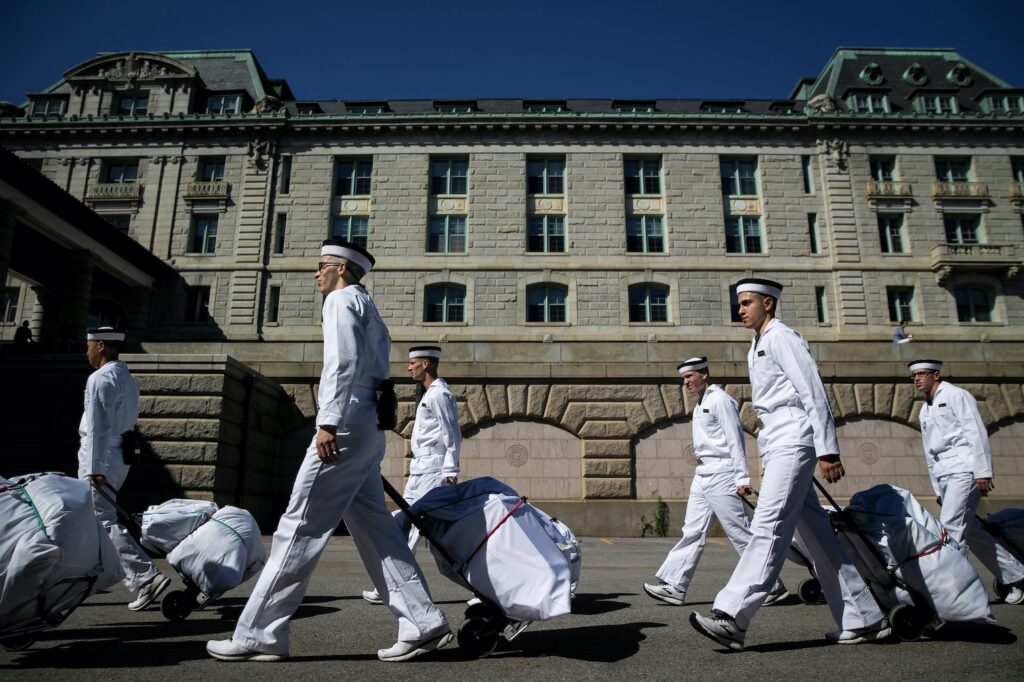 Incoming members of the class of 2023, known as “plebes,” reported to the Academy and received medical examinations, haircuts, uniforms, and instructions on how to salute. REUTERS/Al Drago

A student in the U.S. Naval Academy in Annapolis, MD is suing the academy for viewpoint discrimination after being threatened with expulsion over a number of social media posts about the Black Lives Matter protests.

According to Courthouse News, Chase Standage, 21, tweeted, “Go ahead, cut funds to the police. Community policing by building relations is expensive and timely, anyways. Bullets, on the other hand, are cheap and in ready supply.” He also tweeted that Breonna Taylor, who was shot and killed by Louisville police officers, had “received justice.”

Filed in the United States District Court for the District of Maryland on September 30th, the lawsuit claims the academy is singling out Standage because of his political beliefs, and that students who wrote posts advocating for violence against police officers were not punished.

According to the lawsuit, Standage is facing possible expulsion for engaging in political activities in violation of a local instruction, and conduct unbecoming a midshipman. Standage denies that his posts were “inherently political,” and notes that they were not “published while in uniform or while acting in any official capacity that necessarily reflects poorly on the military.”

First Amendment Watch reached out to the Foundation of Individual Rights of Education (FIRE), which regularly defends students’ and professors’ free speech rights, for comment.

“Students at public universities have robust First Amendment rights to share their personal views on social media without fear that their institutions will punish them. The extent to which those rights are protected at military institutions are less clear, as the Armed Services, and their training academies, have a much stronger interest in order and discipline than other academic environments,” said Adam Steinbaugh, Director of Individual Rights Defense Program.