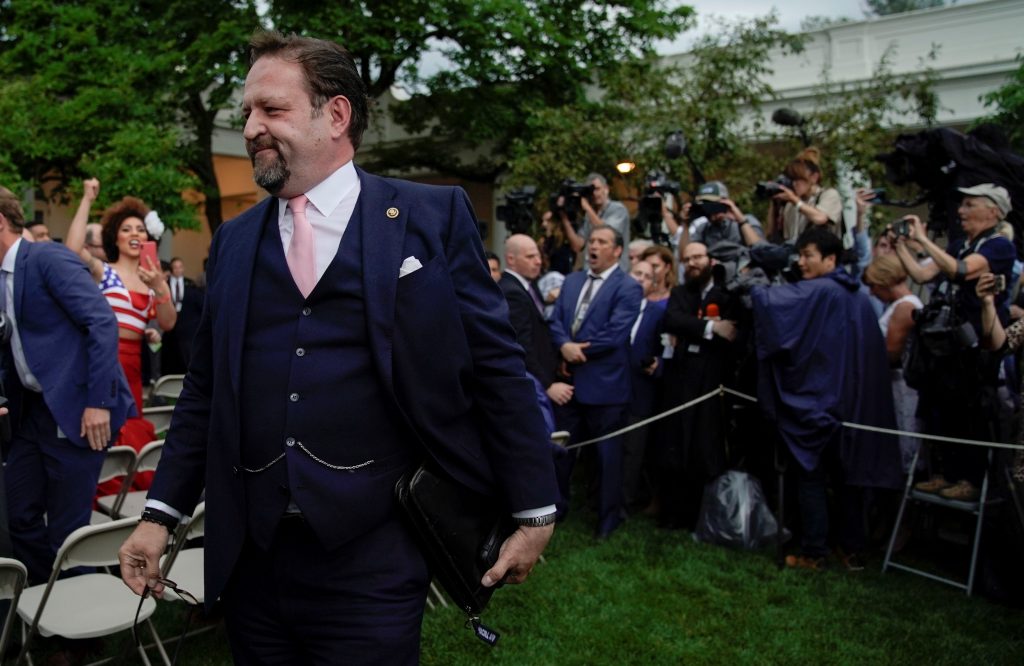 Former Trump White House staffer and current Salem Radio talk show host Sebastian Gorka, a guest of U.S. President Donald Trump at his social media summit, walks away after yelling at Playboy writer and White House correspondent Brian Karem and members of the White House press corps after attending an event in the Rose Garden where the president announced his administration’s efforts to gain citizenship data during the 2020 census at the White House in Washington, U.S., July 11, 2019. REUTERS/Kevin Lamarque

Brian Karem, a senior White House correspondent for Playboy magazine, is suing the Trump administration over the suspension of his press pass. Filed in the United States District Court for the District of Columbia, Karem’s lawsuit marks the second time a journalist has sued the administration after losing their White House press credentials.

In November 2018, Jim Acosta, a senior White House correspondent at CNN, lost his hard pass after questioning the President about his immigration policy. Acosta sued the administration for violating his First Amendment right to freedom of the press and his Fifth Amendment right to due process. Two weeks after Acosta lost his press pass, a federal judge found that his due process rights had been violated, and ordered Acosta’s press credentials to be reinstated.

Although Trump as a political candidate may have a right to refuse news organizations access to his rallies, the First Amendment restricts a president from barring journalists from White House news conferences whose coverage they deem unfavorable.

Karem’s suspension came after a heated argument with a former White House aide and conservative radio host Sebastian Gorka. The altercation took place in the White House Rose Garden after a talk the President gave about his plan to add a citizenship question to the 2020 census. After hearing Karem make a joke about a group of Trump-supporters in the audience being “eager for demonic possession,” Gorka shouted, “And you’re a journalist right?” To which Karem responded, “Come on over here and talk to me, brother. We can go outside and have a long conversation,” a comment he later told The Washington Post wasn’t intended to insinuate a physical challenge.

In a video that was widely circulated online, Gorka is seen walking very close to Karem, shouting, “You’re a punk! You’re not a journalist! You’re a punk!”

While neither party behaved professionally, only Karem received a letter from the White House press secretary, Stephanie Frisham, notifying him that his press pass would be suspended temporarily for violating purportedly “widely-shared understandings and norms of media professionalism.”

“This is part of the administration’s concerted effort to stifle the First Amendment, abandon due process and inject fealty among the press corps,” Karem told HuffPost. “They’re using this as a pretense because I’ve been critical of this administration.”

The Playboy reporter has hired Ted Boutrous of Gibson Dunn as his attorney. Boutrous also defended Jim Acosta in his lawsuit against the administration in November 2018.

In his complaint filed on behalf of Karem on August 20, Boutrous writes:

Karem is seeking a jury trial for immediate restoration of his hard pass, a declaration that the suspension was unconstitutional, and reimbursement for Karem’s legal fees.