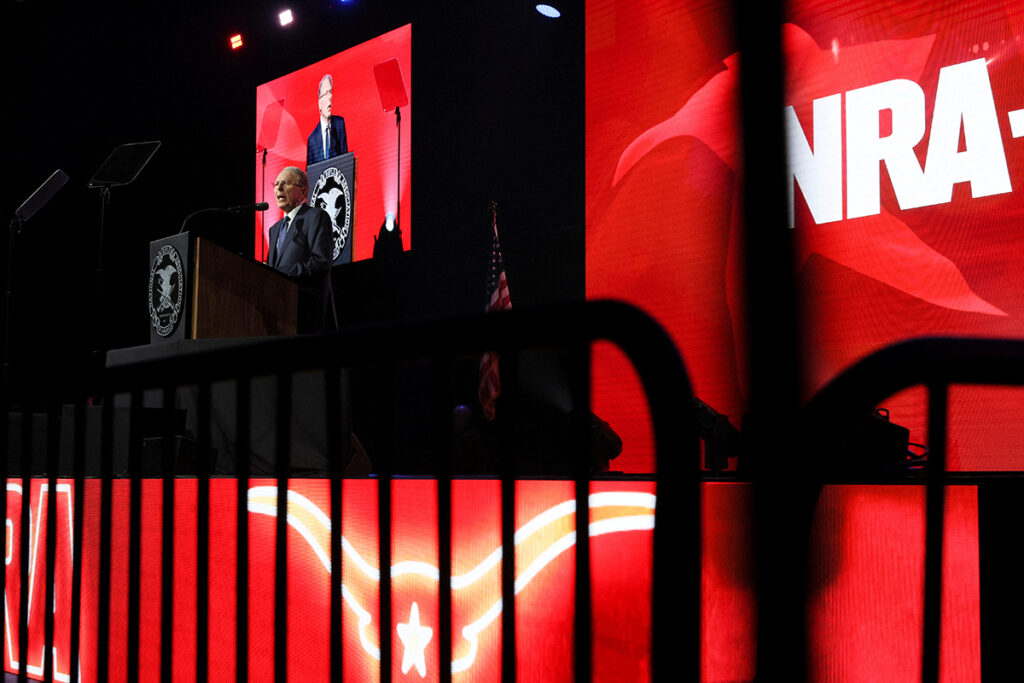 In a Reuters file photo, Wayne LaPierre, CEO of the National Rifle Association, (NRA), speaks at the NRA-ILA Leadership Forum during the NRA annual convention in Houston, Texas, May 27, 2022. (Reuters/Shannon Stapleton)

A National Rifle Association lawsuit against a New York state financial regulator was dismissed Sept. 22 after a federal appeals court ruled that the regulator did not stifle the speech of the gun rights group.

The National Rifle Association, (NRA), claimed that Maria T. Vullo, the former superintendent of the New York State Department of Financial Services, (DFS), coerced and threatened banks and insurers to sever business relationships with the gun group, according to the 2018 lawsuit filed in the United States District Court for the Northern District of New York.

In the suit, the NRA argued that Vullo had used her position as a government official, along with former Gov. Andrew Cuomo, to suppress the “NRA’s pro-Second Amendment viewpoint,” the complaint stated. “Defendants undertook such unlawful conduct with the intent to obstruct, chill, deter, and retaliate against the NRA’s core political speech.”

The NRA claimed that this “unlawful conduct” was a result of several strategies by Vullo and Gov. Cuomo. According to the complaint, these actions included DFS guidance letters sent by Vullo, press releases from Gov. Cuomo’s office, alleged “backroom exhortations,” and consent decrees between DFS and the insurance companies.

This “established a ‘system of informal censorship’ designed to suppress the NRA’s speech,” the complaint stated.

“The Department encourages its chartered and licensed financial institutions to continue evaluating and managing their risks, including reputational risks, that may arise from their dealing with the NRA or similar gun promotion organizations, if any, as well as continued assessment of compliance with their own codes of social responsibility,” stated a guidance letter Vullo sent on April 19, 2018.

In addition to the guidance letters, the DFS investigated three insurance companies and determined that the insurers were involved with the NRA’s Carry Guard insurance program. The Carry Guard program provides legal fees to those who fire a weapon in self-defense, and violates New York state law, according to a DFS press release. Vullo subsequently fined the insurers more than $13 million as a result.

The United States District Court for the Northern District of New York dismissed all of the NRA’s claims, except for two: the free speech claim against Vullo and another against Gov. Cuomo.

The federal district court ruled that Vullo’s actions “could be interpreted as a veiled threat to regulated industries to disassociate with the NRA or risk DFS enforcement action,” according to the decision filed March 2021.

“Corporations are demonstrating that business can lead the way and bring about the kind of positive social change needed to minimize the chance that we will witness more of these senseless tragedies,” said Vullo in a 2018 press release used by the NRA in their complaint, referencing the Parkland shooting. “DFS urges all insurance companies and banks doing business in New York to join the companies that have already discontinued their arrangements with the NRA, and to take prompt actions to manage these risks and promote public health and safety.”

“While neither the Guidance Letters nor the Cuomo Press Release specifically directs or even requests that insurance companies and financial institutions sever ties with the NRA, a plausible inference exists that a veiled threat is being conveyed,” the decision stated.

The federal appeals court determined that Vullo had acted in her official capacity, and her contact with the businesses was done in “good faith.”

“The Second Circuit has unanimously dismissed the NRA’s baseless case against me, upholding the rule of law,” Vullo tweeted on the day of the decision.

“Government officials cannot, for example, use their regulatory powers to coerce individuals or entities into refraining from protected speech,” wrote U.S. Circuit Judge Denny Chin in the decision. “At the same time, however, government officials have a right — indeed, a duty — to address issues of public concern … We conclude that the NRA has failed to plausibly allege that Vullo ‘crossed the line ‘between attempts to convince and attempts to coerce.’’”

Judge Chin noted that Vullo’s words in the letters and press releases “speak for themselves” and that “they cannot reasonably be construed as being unconstitutionally threatening or coercive.”

The NRA’s attorney, William A. Brewer III of the Brewer, Attorneys & Counselors law firm, described the decision as “unfortunate” because Vullo never sat for a deposition to share what may have been happening behind closed doors, referencing the NRA’s claim of “backroom exhortations.”

Brewer said that it was “absolutely stunning” to see an appellate court create this carve out of the First Amendment in respect to financial regulators “who want to accomplish their policy objectives.”

But, according to one of Vullo’s attorneys, Andrew Celli, Vullo was protected under qualified immunity, which protects government officials from “the burdens of litigation, including being deposed,” he said.

“They [the court] realized that although she was the defendant in the case, her free speech rights were entitled to every bit as much value as the speech rights of the plaintiff,” Celli said.

The 2018 NRA complaint was also filed against Gov. Cuomo and the DFS as the gun rights group alleged that state officials were “blacklisting” them, and therefore, stifling their speech.

“This case is necessitated by an overt viewpoint-based discrimination campaign against the NRA and the millions of law-abiding gun owners that it represents,” the complaint stated.  “Directed by Governor Andrew Cuomo, this campaign involves selective prosecution, backroom exhortations, and public threats with a singular goal — to deprive the NRA and its constituents of their First Amendment right to speak freely about gun-related issues and defend the Second Amendment.”

An April 2018 press release from Cuomo’s office was used as an example in the NRA’s allegations against him in their complaint.

“I am directing the Department of Financial Services to urge insurers and bankers statewide to determine whether any relationship they may have with the NRA or similar organizations sends the wrong message to their clients and their communities who often look to them for guidance and support,” stated Cuomo in the press release. “This is not just a matter of reputation, it is a matter of public safety, and working together, we can put an end to gun violence in New York once and for all.”

Brewer says that the issue at hand is that government officials should not single out opposing viewpoints and then use their power to silence them. “He [Cuomo] clearly targeted his longtime adversary, the NRA, and enlisted Vullo,” Brewer said.

During the litigation, Cuomo shared a statement in response to the NRA’s claim that he was putting them out of business. It was a short tweet: “If I could have put the NRA out of business, I would’ve done it 20 years ago. I’ll see you in court.”

The American Civil Liberties Union, (ACLU), submitted an amicus brief on behalf of the NRA in 2018, stating that while public officials are able to express their opinions freely, and “may condemn viewpoints or groups they view as inimical to public welfare, they cannot abuse their regulatory authority to retaliate against disfavored advocacy organizations and to impose burdens on those organizations’ ability to conduct lawful business.”

The ACLU may not necessarily agree with the NRA on the Second Amendment, Brewer says, but they agreed that the First Amendment rights of the NRA were violated, despite the organizations’ differences of opinion.

The NRA, according to Brewer, is weighing all of its options for their next step and “anxiously wants to get the case to trial against former Gov. Cuomo.” In regards to this decision, he said, the NRA could either file a motion to rehear en banc, meaning the entire court reconsiders the case, or accept the decision and file a writ of certiorari.

“I think there’s little or no chance that the NRA will not pursue one of those options given how important this precedent is,” Brewer said. If none of them is successful, he believes “there’s a significant likelihood that the NRA would take this up to the Supreme Court, where the NRA is no stranger.”