Attacks on the Press | Protest | Right to Assemble 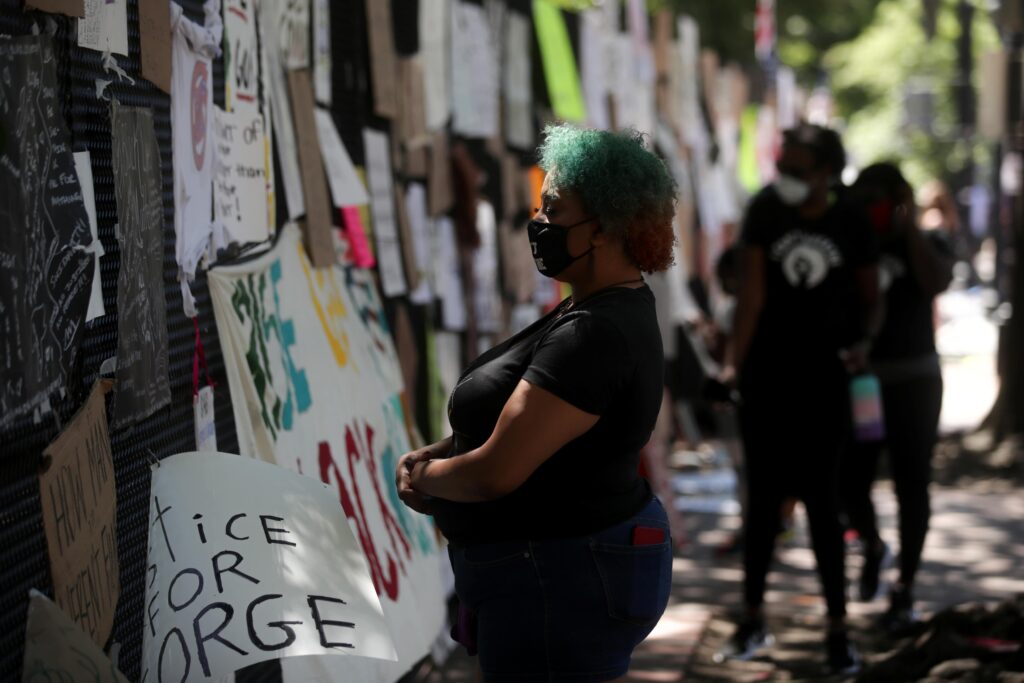 People gather to view protest signs now affixed to the fence around Lafayette Square at the scene where protesters clashed with police in the aftermath of the death in Minneapolis police custody of George Floyd, near the White House in Washington, U.S. June 8, 2020. REUTERS/Jonathan Ernst

After the U.S. Park Police (USPP) led law enforcement to forcibly shut down a mostly peaceful protest on Lafayette Square in Washington, D.C., an hour before a city-wide curfew on June 1st, 2020, the protestors and the press have pushed for answers about who was responsible for the decision.

Many suspected that former President Donald Trump had ordered the police to clear the park so that he could pose for a photo op outside of a nearby historic church. Earlier that day, before law enforcement used tear gas and pepper balls against the Lafayette Square protests, the President warned that he would deploy the U.S. military to any city that failed to “take the actions necessary” to maintain order.

But a new report issued on June 8th by the Interior Department says that the USPP were not acting on Trump’s orders.

According to the 41-page report, “The evidence we reviewed showed that the USPP cleared the park to allow the contractor to safely install the antiscale fencing in response to destruction of property and injury to officers occurring on May 30 and 31…Further, the evidence showed that the USPP [U.S. Park Police] did not know about the President’s potential movement until mid- to late afternoon on June 1 — hours after it had begun developing its operational plan and the fencing contractor had arrived in the park.”

See related story:  Black Lives Matter Sues Trump and Barr Over Use of Force in a D.C. Protest

The author of the report, Inspector General Mark Greenblatt told The New York Times that the scope of the investigation was limited, as it was focused only on the USPP. The other agencies involved that day were the National Guard, the United States Capitol Police and the Bureau of Alcohol, Tobacco, Firearms and Explosives. As a result, Greenblatt cautioned, the report should not be considered a definitive account of the events on June 1.

Some political leaders and organizations have expressed skepticism about the report’s findings because the investigators did not interview Secret Service and White House personnel.

See our Teacher Guide on The Right to Peaceful Assembly

House Natural Resources Committee Chairman Raúl Grijalva put out a statement announcing that he planned to continue his own inquiry into the events last June.

“The Lafayette Square crackdown was played on repeat on televisions around the world and raised serious questions about why heavily armed law enforcement attacked peaceful civilians practicing their constitutional rights. Not only does this report not answer those questions, it doesn’t even seem to acknowledge them,” the statement said. “Our own investigation is ongoing, and we will continue to pursue answers to the questions this report didn’t satisfactorily address.”

The American Civil Liberties Union, which is suing Trump and senior officials on behalf of eight protesters who say they were injured by police, also put out a statement expressing dissatisfaction with the report’s findings.

“These shifting explanations cannot distract from the fundamental problem: The force used against the demonstrators at Lafayette Square was grossly excessive in relation to any conceivably legitimate purpose,” the ACLU statement reads.