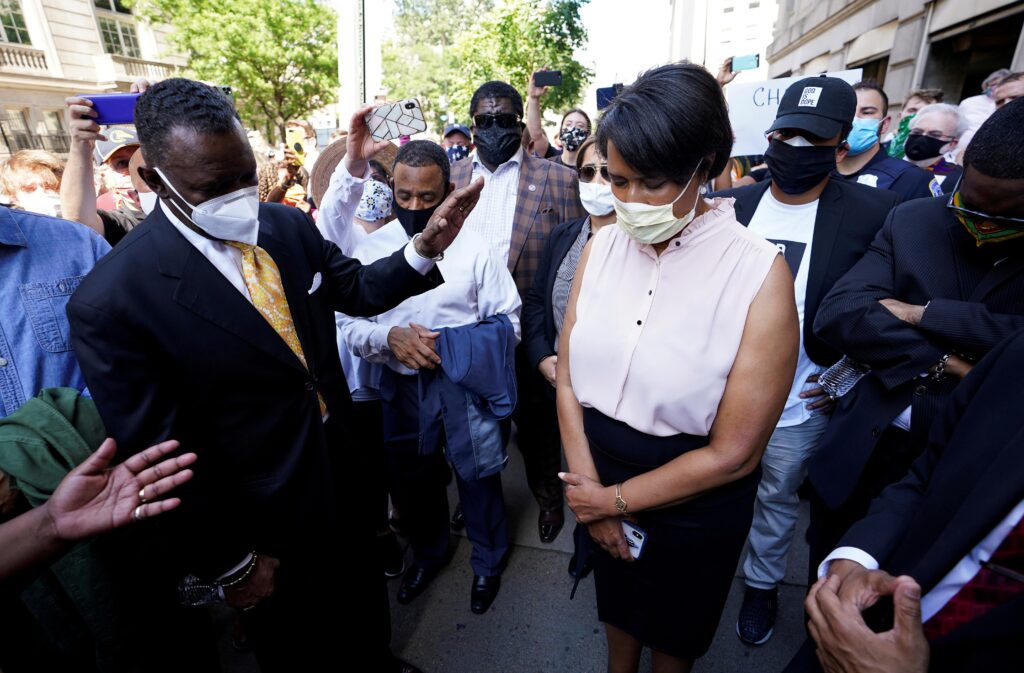 Washington, DC Mayor Muriel Bowser bows her head in prayer during a vigil as protests continue on the streets near the White House over the death in police custody of George Floyd, in Washington, U.S., June 3, 2020. REUTERS/Kevin Lamarque/File Photo

Filed in the U.S. District Court for the District of Columbia, the complaint centers around a June 1st protest in a park near the White House that was broken up by federal law enforcement agents.

According to the complaint, “At approximately 6:30 p.m., law enforcement officers rushed and attacked the assembled protesters without warning or provocation, climbing and jumping over barriers behind which the demonstrators were standing.”

The complaint further alleges that the officers used force to disrupt the protest, and officers “fired flash-bang shells, tear gas, smoke canisters, pepper balls, and/or rubber bullets into the crowd.”

After the crowd was cleared from Lafayette Park, Trump walked across the park to pose for a photo in front of  historic St. John’s church.

“Defendants’ actions to shut down the Lafayette Square demonstration is the manifestation of the very despotism against which the First Amendment was intended to protect,” reads the complaint. “This action seeks to uphold, against uncivil, unwarranted, unjust, and blatantly unlawful attack, cherished rights enshrined in the First and Fourth Amendment to the Constitution and foundational to our Democracy: the rights to peaceful assembly, petition for redress of grievances, freedom of speech, freedom of the press, and freedom from unwarranted seizures by the government.”

The suit was brought by several organizations, including the American Civil Liberty Union (ACLU) of the District of Columbia, and white-shoe law firm Arnold & Porter Kaye Scholer, on behalf of Black Lives Matter and the protestors.

Plaintiffs are asking the court to rule that Trump, Barr, et al., violated the First and Fourth Amendments, to issue an injunction barring the defendants from taking similar actions in the future, and to award compensatory and punitive damages.