SCOTUS Nominee Kavanaugh And The First Amendment: His Record, Views, And Controversies 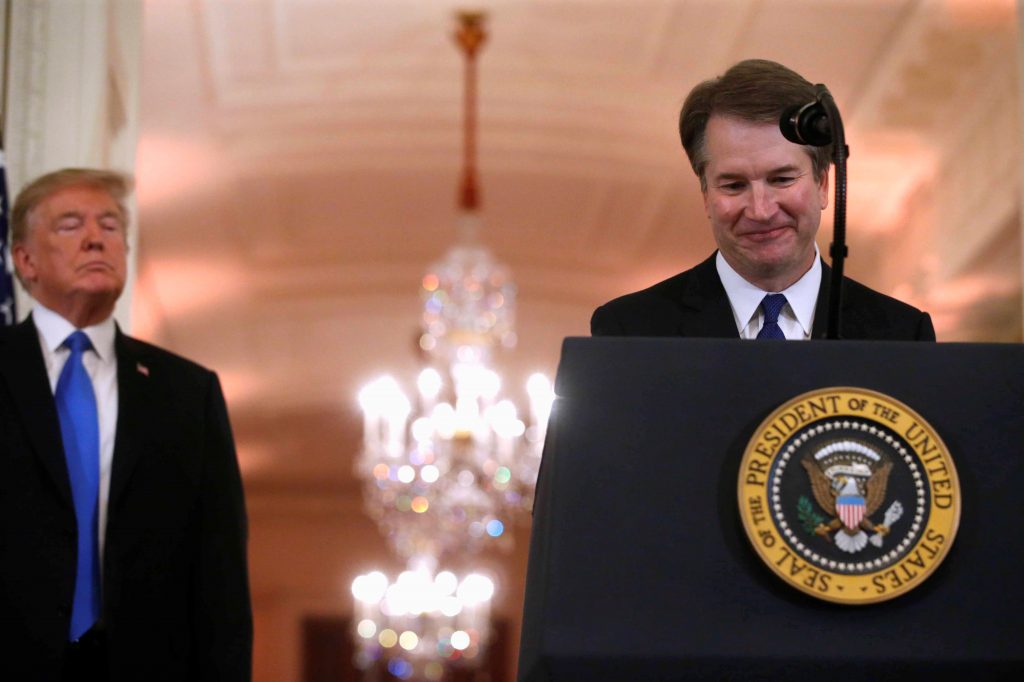 During the course of the confirmation hearings, Kavanaugh was questioned by Minnesota Senator Amy Klobuchar about reporter’s privilege under the First Amendment, and how he would apply the privilege to the protection of a confidential source.

Kavanaugh was asked by two Democratic Senators to give journalists permission to speak openly about past off-the-record and on background conversations that took place while he was working for Kenneth Starr, but responded with a “no.”

In a written answer, Kavanaugh claimed that he was respecting the First Amendment rights of reporters by allowing them to maintain their confidentiality agreements. “It would be inappropriate in this context to disregard that foundational privilege and protection for the press,” he wrote.

For the Columbia Journalism Review, Todd Gitlin highlights the conflict reporters face when wanting to adhere to their “professional code” of not naming sources  and what may be a First Amendment obligation to inform the American people about the record of a person nominated to one of the most influential jobs in the country.  “There’s no way around it,” he writes. “Silence matters. So does the predictable consequence of breaking a silence. To my mind, if Kavanaugh leaked from Starr’s office and is covering that up, he is ethically disqualified to serve on the Supreme Court. Reporters owe us, and the Senate, information that helps determine who deserves a spot on the highest bench in the land.”

President Trump questioned why the protests during the confirmation hearing are allowed, according to an interview transcript with The Daily Caller.

“I don’t know why they don’t, why they don’t take care of a situation like that because it’s terrible. I think it’s embarrassing for the country to allow protesters, you don’t even know which side the protesters were on. But to allow someone to stand up and scream from the top of their lungs and nobody does anything about it is frankly — I think it’s an embarrassment,” he said.

Damon Root refers to the current Supreme Court nominee’s record on free and commercial speech as “discouraging” in his analysis in Reason.  “Free Speech advocates are likely to be disappointed by the answer when they examine Kavanaugh’s vote in an important 2014 case,” he writes, citing the judge’s ruling in American Meat Institute v. Department of Agriculture.  In that case, Kavanaugh upheld a federal regulation that forced the meat industry to include “country of origin” information on packaging which meat packers challenged on First Amendment grounds, arguing that it amounted to compelled speech.

Brian Miller writes in Forbes on Kavanaugh’s “Principled Record” on free speech, noting that his First Amendment rulings from twelve years on the bench are consistent. He points to Kavanaugh’s majority opinion in Emily’s List v. FEC, where he wrote that Emily’s list deserved “full First Amendment Protection” and his dissent in Priests for Life v. HHS,  a First Amendment religion case.  Miller asserts, “These two cases show that regardless of the speaker’s point of view, Judge Kavanaugh clearly believes the First Amendment protects everyone. When faced with speech on both sides of a controversial issue, he ruled in favor of protecting speech each time.”

Ken White of Popehat takes a deep dive into Kavanaugh’s twelve years on the D.C. Circuit and shows that he is strongly protective of free speech in “substance and rhetoric”, and often applies free speech doctrines to classic free speech cases and top government regulation scenarios.

Other reports have pointed to Kavanaugh’s dissent as part of a hearing on the FCC’s net neutrality order which he argued violated First Amendment protections, among other things.

Adam Liptak writes in The New York Times about his prediction that if confirmed to the Supreme Court, Kavanaugh would likely uphold and expand the Citizen United decision. Liptak bases his argument on the fact that Kavanaugh has “a favorite sentence” which he has written is “perhaps the most important sentence in the court’s entire campaign finance jurisprudence” and referred to it as “one of the most important sentences in First Amendment history.”

The sentence, which appeared in the 1976 SCOTUS decision of Buckley v. Valeo is:

“The concept that government may restrict the speech of some elements of our society in order to enhance the relative voice of others is wholly foreign to the First Amendment.”

Justice Kennedy quoted this sentence in his majority opinion in Citizens United, and said that it also applied to corporate and union spending.

He warns that as the Kavanaugh nomination looms ahead, one issue that should not be lost in debate is the extent to which his confirmation will further the Court’s use of the right of free speech to strike down various regulatory disclosure requirements, what he considers a legal tactic that is “highly problematic.”