Hate Speech on Social Media: Is There a Way to a More Civil Discussion? 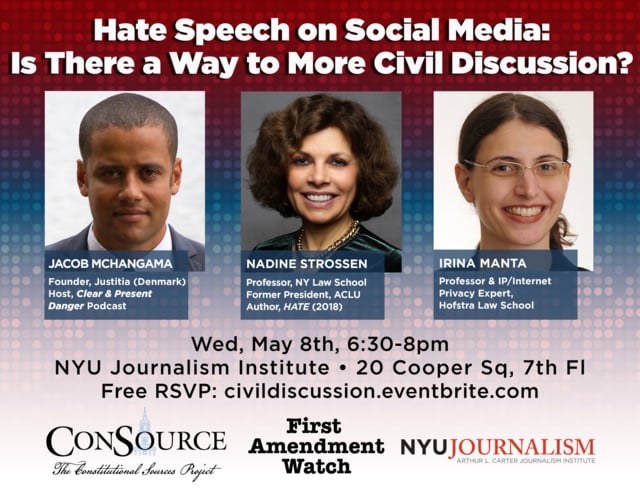 First Amendment Watch and ConSource, a leading site that encourages discussion of the U.S. Constitution, hosted a panel discussion entitled, “Hate Speech on Social Media: Is There a Way to a More Civil Discussion?”

The panel featured Nadine Strossen, a professor of law at New York Law School, and the first woman and youngest person ever to serve as the president of the American Civil Liberties Union, Jacob Mchangama, the director and founder of Justitia, a think tank based in Copenhagen that’s focused on human rights, and Irina Manta, a professor of law at Hofstra Law School,and an expert on the Internet and privacy rights.

First Amendment founder and Marjorie Deane Professor of Journalism at New York University Professor Stephen Solomon moderated the talk, and the panelists discussed such issues as how governments in the U.S. and abroad address issues related to hate speech, what, if anything, social media platforms should do to police hate speech, and how, despite its dark side, social media has facilitated greater freedom of expression and a marketplace of ideas.