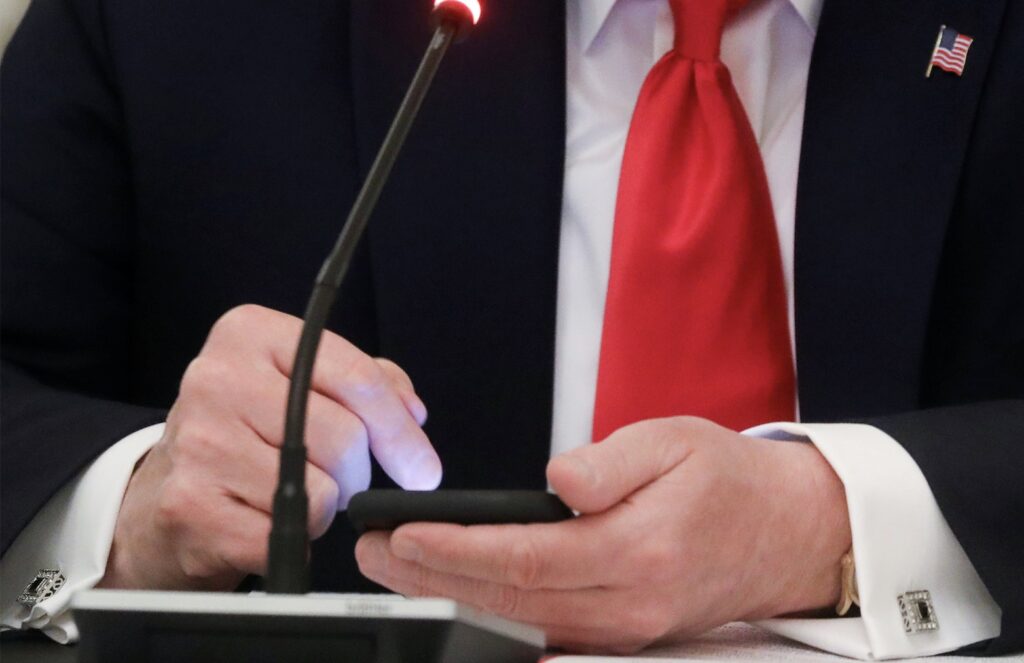 U.S. President Donald Trump is seen tapping the screen on a mobile phone at the approximate time a tweet was released from his Twitter account, during a roundtable discussion on the reopening of small businesses in the State Dining Room at the White House in Washington, U.S., June 18, 2020. REUTERS/Leah Millis

The White House is petitioning the United States Supreme Court to review the Second Circuit ruling which found Trump’s practice of blocking critics on his personal Twitter account, @realDonaldTrump, a violation of the First Amendment.

In 2017, the Knight First Amendment Institute at Columbia University sued President Donald Trump for blocking seven people from @realDonaldTrump because they were critical of his administration. Though the account was technically personal, the Knight Institute argued that Trump overwhelmingly used it for official communication such as announcing policy decisions and describing meetings with foreign leaders. In doing so, Knight postulated, Trump’s account was a public forum,  and any attempt to block critical users was an act of government censorship.

The United States District Court for the Southern District of New York and the United States Court of Appeals for the Second Circuit have both ruled that Trump’s act of blocking individuals is unconstitutional.

Even if the president used @realDonaldTrump to make official statements, his lawyers argued that the account itself remained private in much the same way his personal property was private. “[I]f a President makes an official speech on real property that he owns, he obviously does not thereby lose his right as a private property owner to exclude those with whom he disagrees,” the lawyers wrote.

However, the lawyer’s hypothetical fails to consider factors that could transform an event hosted on a public official’s private property into a public forum. For example, a press conference in Trump’s hotel could still be considered a public event because the president would have Secret Service agents in attendance. Similarly, if Trump were to use the police, instead of private security, to arrest or remove reporters from a political rally,  that would make it a government event and such a move would violate the First Amendment.

Trump’s lawyers also challenged the notion that blocking users was a kind of state action because it did not allegedly involve government power.

“[Trump’s] use of Twitter’s blocking function (a function created by Twitter and made available to every user) cannot constitute state action within his personal account (which he has the power to use and control independent of his office),” Trump’s petition states, adding that the act of blocking must “itself involve the exercise of some power possessed by virtue of his position” to meet the state action requirement.

Following the filing of the petition, the Knight Institute published a response on their website in which they stressed the importance of public access to officials’ social media accounts.

“In recent months, we’ve seen how vital these accounts are to ensuring that people get the information they need to understand public policies related to everything from COVID19 to unemployment benefits,” said Katie Fallow, a Senior Staff Attorney at Knight Institute. “Blocking people from these forums denies them access to important information and deprives them of the opportunity to engage with the officials who represent them.”