Gene Policinski Commentary: The Whereabouts Of Missing Journalist Jamal Khashoggi Should Concern Us All 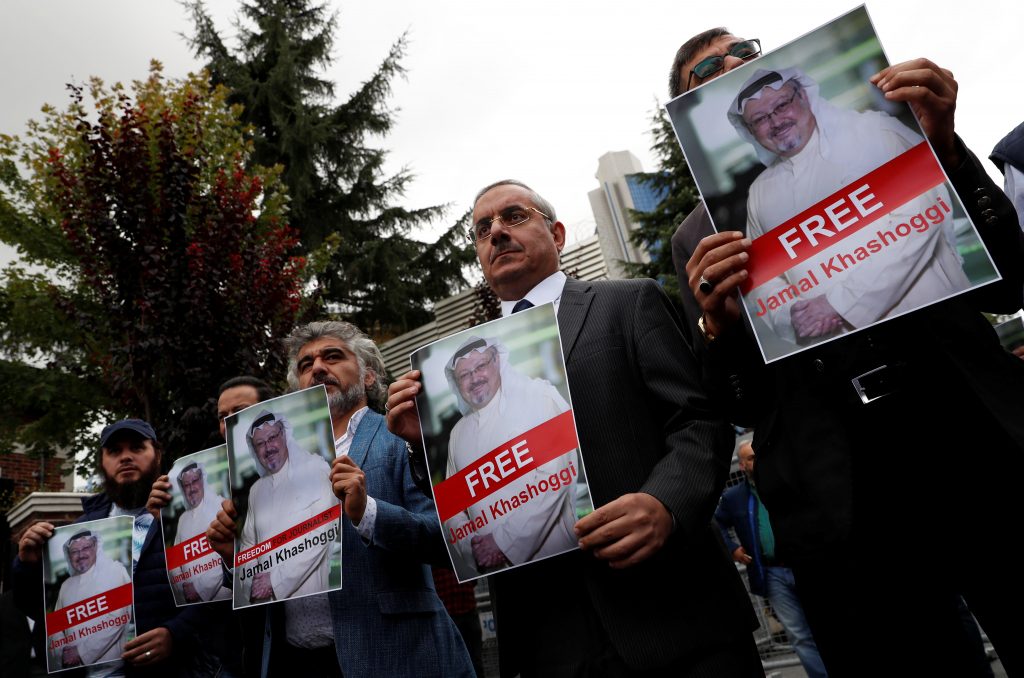 Human rights activists and friends of Saudi journalist Jamal Khashoggi hold his pictures during a protest outside the Saudi Consulate in Istanbul, Turkey October 8, 2018. REUTERS/Murad Sezer

Journalist Jamal Khashoggi is missing — and the world does not know if he is alive or dead.

That there is no answer yet is, in itself, a tragedy. But depending on that answer, it may well become an atrocity.

Turkey’s government said on Oct. 8 that Khashoggi, a prominent journalist from Saudi Arabia now living in the United States and a regular contributor to The Washington Post’s Global Opinions page, apparently was killed in the Saudi Consulate in Istanbul last week.

Saudi Arabian officials strongly deny that declaration. But the government of Turkey — even though it’s rated as one of the most repressive nations in terms of press freedom — stands by its assertion.

What we do know is that Khashoggi entered the Saudi Arabian mission offices on Oct. 2 and has not been seen since that time. His fiancée, who waited outside for hours that day, said she has not seen him since he went into the mission. A surveillance camera outside the consulate shows Khashoggi entering, but no video has been produced showing him departing.

We also know that Khashoggi was a vocal critic of Saudi leaders — and of a government that has been cracking down on dissent and criticism.

Khashoggi had fled to the United States over his criticism of the Saudi royal family and its influence in that nation. He went to the embassy in Turkey to obtain copies of personal papers needed for a planned marriage to a Turkish citizen.

“If the reports of Jamal’s murder are true, it is a monstrous and unfathomable act,” Fred Hiatt, The Washington Post’s editorial page editor, said in a statement. “Jamal was — or, as we hope, is — a committed, courageous journalist. He writes out of a sense of love for his country and deep faith in human dignity and freedom. He is respected in his country, in the Middle East and throughout the world. We have been enormously proud to publish his writings.”

Khashoggi’s disappearance and possible murder comes at nearly the same time when, in Bulgaria, the body of Viktoria Marinova, a journalist with TVN, was discovered Oct. 6. Marinova, 30, had been raped, beaten and strangled, according to media reports and Bulgarian police.

Reporters Without Borders, an international group that tracks assaults on journalists, now lists 57 journalists, 14 citizens working in journalism and four press aides as having been killed thus far in 2018.

In its latest report, the nonpartisan human rights organization Freedom House notes that just 13 percent of the world’s population lives in nations where the press is considered free.

You may well be asking, “Why should I get angry over the as-yet undetermined fate of a journalist whose work, outside of the Washington, D.C. area, it’s likely I have not seen?”

Well, each time a Khashoggi disappears under suspicious circumstances or a Marinova is savagely killed, it diminishes all of our freedoms; there’s a bit more tarnish on what our still-strong First Amendment protection for a free press has always meant to the world.

It’s as simple as that. We care because we value freedom — the freedom to differ with those in power or others in our society, the freedom to speak or write our views, without the fear that someday we may enter a government building on a simple task and vanish.

Yes, there’s great debate around what a free press means today in the United States. But even the most vitriolic attacks often have a call for journalism’s essential values of fairness and accuracy. It’s those values we defend in defending journalists, even those we don’t know.

As a nation, we must declare every time that an attack on journalists anywhere in the world — through violence, threat or faux rule of law — is an attack on a core principle of our democracy. And we do not surrender those principles to tyranny, injustice or criminal acts.

Where is Jamal Khashoggi? His family should know. His colleagues in the profession should know. Every person in every nation around the globe should know.

In the name of press freedom and what it means to us as citizens of the United States and part of humanity, we not only expect an answer, we demand it.

Gene Policinski is president and chief operating officer of the Newseum Institute. He can be reached at gpolicinski@newseum.org, or follow him on Twitter at @genefac.

Attacks on the Press Jamal Khashoggi