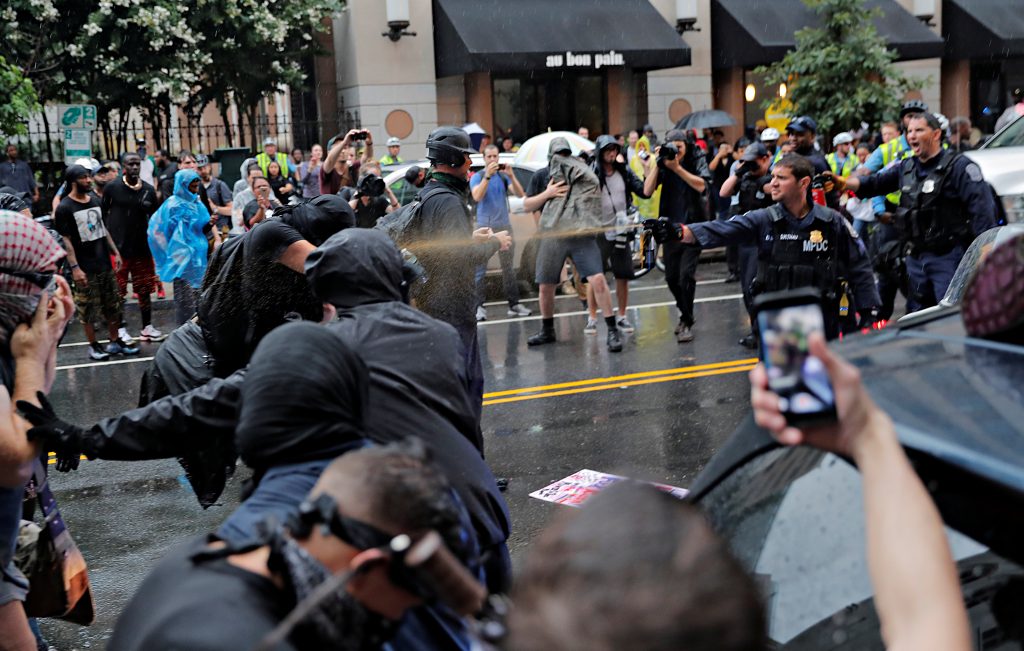 Police officers use pepper spray towards counter-demonstrators during a white nationalist-led rally marking the one year anniversary of the 2017 Charlottesville ‘Unite the Right’ protests, in Washington, U.S., August 12, 2018. REUTERS/Lucas Jackson

The United States Appeals Court for the Fourth Circuit struck down parts of a federal law against rioting in a case involving two California men who were charged with inciting violence during the 2017 Unite the Right rally in Charlottesville, Virginia.

Passed in 1968 in conjunction with the Civil Rights Act, the Anti-Riot Act makes it illegal to “organize,” “promote,” encourage,” or “participate in” or “carry on” a riot. Courts have raised concerns about the law’s restrictions on protected speech in the past. Last year, the United States District Court for the Central District of California ruled the entire law unconstitutionally overbroad, writing “it sweeps in a wide swath of protected expressive activity as part of its efforts to punish rioting.”

Writing for a three-judge panel, Judge Albert Diaz echoed the California court’s concerns, but ultimately chose to sever only the portions of the statute that pertained to speech.

“In our view, the Anti-Riot Act sweeps up a substantial amount of speech that retains the status of protected advocacy under Brandenburg insofar as it encompasses speech tending to ‘encourage’ or ‘promote’ a riot,” Diaz wrote adding that, “the appropriate remedy is to invalidate no more than the language responsible for the statute’s overbreadth.”

By leaving portions of the law intact, the appeals court was able to uphold the convictions against the Unite the Right members for attacking other individuals during demonstrations in Hunting Beach, Berkeley, and Charlottesville.

“The defendants admitted to having each (as part of an assemblage of three or more) ‘personally committed multiple violent acts’ — including but not limited to pushing, punching, kicking, choking, head-butting, and otherwise assaulting numerous individuals, and none of which ‘were in self-defense,’” the ruling stated.

The Fourth Circuit is the first federal appellate court to find parts of the law unconstitutionally overbroad under the First Amendment. The ruling could impact Attorney General William P. Barr’s plan to use the law to prosecute individuals accused of inciting riots during the demonstrations following the police killing of George Floyd.