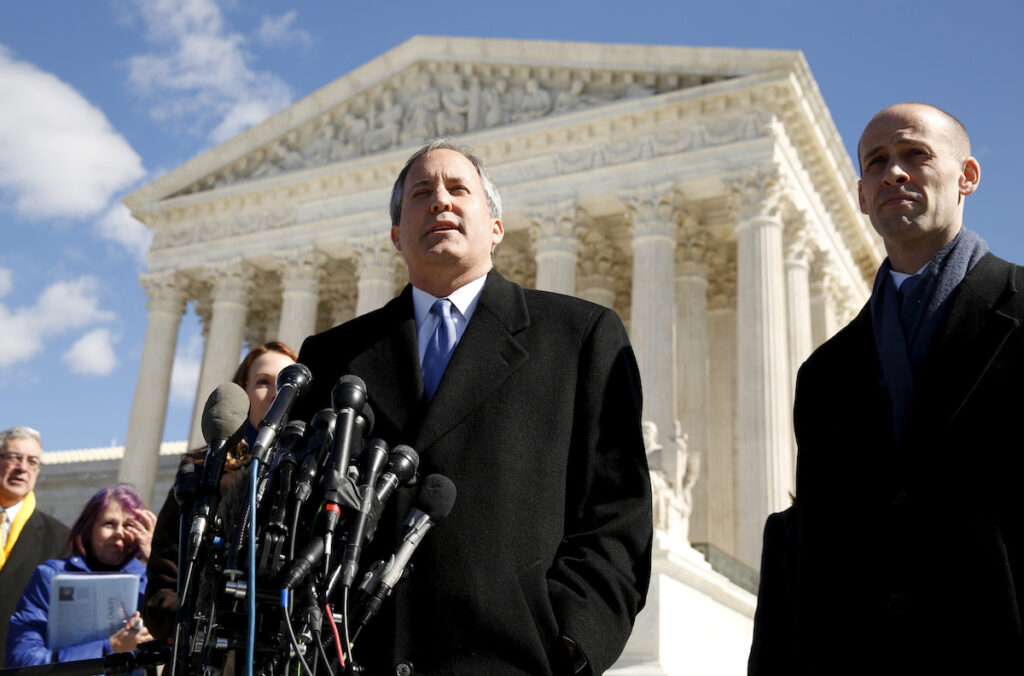 Texas Attorney General Ken Paxton addresses reporters on the steps of the U.S. Supreme Court after the court took up a major abortion case focusing on whether a Texas law that imposes strict regulations on abortion doctors and clinic buildings interferes with the constitutional right of a woman to end her pregnancy in Washington March 2, 2016. At right is Texas Solicitor General Scott Keller. REUTERS/Kevin Lamarque

Texas Attorney General Ken Paxton is facing a lawsuit for violating the First Amendment rights of seven constituents after he blocked them from his personal Twitter account, @KenPaxtonTX.

One of the plaintiffs, Mario Carrillo, a pro-immigration campaign manager based in Austin, Texas, reads Paxton’s account to stay updated on news about the Attorney General and his office. Because of his profession, he was particularly interested in any actions Paxton’s office took related to immigration. Carrillo believes he was blocked after bringing attention to the fact that Paxton was indicted in 2015  for securities fraud.

Another plaintiff, Joseph Cascino, believes he was blocked after he replied to a tweet Paxton shared in January announcing that he was giving a speech at the “Stop the Steal” rally led by former President Donald Trump. “Go on and beg for your pardon,” Cascino wrote in the comments. Cascino was referring to speculation that Paxton’s support of the former President was a ruse to get a preemptive pardon.

In the past, officials have argued that personal Twitter accounts cannot be public forums. In these cases, the Second, Fourth, and Eighth circuit courts have ruled that an elected official’s personal account can transform into a public forum if he or she uses it for official purposes.

To demonstrate that @KenPaxtonTX is an official account, the plaintiffs point out that Paxton not only uses the account to “announce, describe, and defend his policies and legal challenges brought by his office,” but that he first opened the account when he was a member of the Texas House of Representatives,  and has been an elected official since that date.

The plaintiffs are being represented by lawyers at the Knight First Amendment Institute and the American Civil Liberties Union.