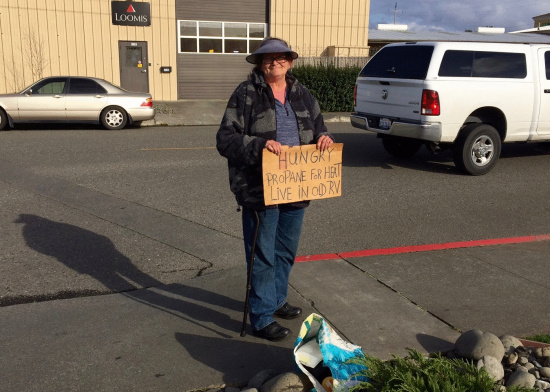 Carla Nelson, 58, asks for money at the driveway to Eureka’s Costco. Both old and new in the city’s panhandling ordinance would ban such activities in this spot. LOST COAST OUTPOST/Ryan Burns

A city council in Eureka, California is planning to amend a 2016 ordinance that regulated “aggressive and intrusive” panhandling after concerns that the law likely violated the First Amendment.

Eureka’s “Aggressive Solicitation Ordinance” drew much of its language from a law in Sacramento, California that established extensive no-solicitation buffer zones in public spaces throughout the city to protect people from “unwarranted and unavoidable confrontations.”

In Eureka, the law prohibited panhandling in roadway medians, gas stations, and bus stations. For example, pedestrians were prohibited from asking for money from anyone inside a car located within 200 feet of an intersection, as well as within 50 feet of any “posted public transportation vehicle stop.”

At the time it was introduced, Eureka lawmakers believed the ordinance would effectively address ongoing issues regarding the safety and welfare of the public. According to the ordinance, lawmakers did not think the law conflicted with First Amendment law, and thought it was sufficiently tailored to serve a substantial governmental interest.

But a growing body of case law has subjected anti-panhandling ordinances like these to legal challenge. Ordinances in Cleveland, Dallas, Denver, and Arkansas restricting panhandling in public places have all been struck down as unconstitutional. Even states that limited the prohibition to “physical interaction” to make clear they were targeting conduct and not speech, faced First Amendment challenges.

“Putting your hand out expresses you need money,” ACLU attorney Betina Brownstein, who filed the complaint against Arkansas, said in an interview with NPR. “Unless they’re obstructing your traffic, your car, or assaulting you in some way” solicitations are protected speech.

Though Eureka’s police chief and city manager defended the “Aggressive Solicitation Ordinance” law at first, they backed away after a U.S. District Court judge in the Eastern District of California ruled that a nearly identical law in Sacramento had the potential to suppress protected speech.

In June 2019, the Lost Coast Outpost reported that the city council was planning to rewrite  its anti-panhandling ordinance to address free speech concerns. The new ordinance would include a new definition of “aggressive solicitation” to avoid overbroad language.

However, the new ordinance would still bar “profane, offensive or abusive language which is inherently likely to provoke an immediate violent reaction.” A judge may find that the terms are vague and includes expression not considered fighting words under Chaplinsky v. New Hampshire.