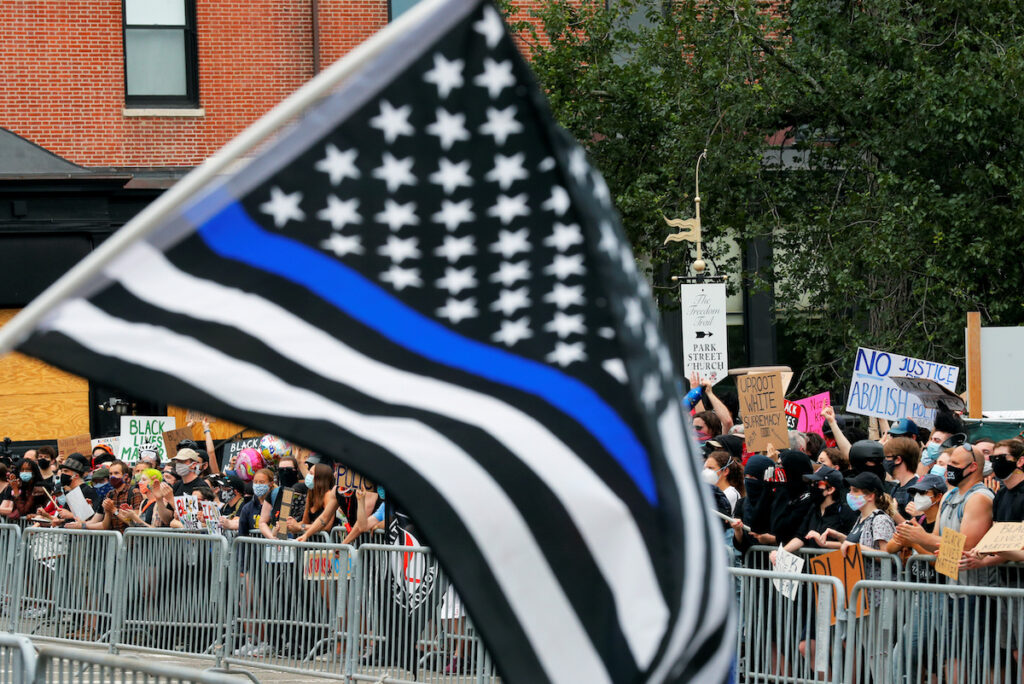 A pro-police flag flutters facing counter-demonstrators during a rally, following weeks of protests against racial inequality in the aftermath of the death in Minneapolis police custody of George Floyd, in Boston, Massachusetts, U.S. June 27, 2020. REUTERS/Brian Snyder

A Utah Police officer is charging a 19-year-old woman with a hate crime for “stomping on a ‘Back the Blue’ sign” while “smirking in an intimidating manner,” The Salt Lake Tribune reported on July 9th.

According to an affidavit acquired by The Tribune, the police officer spotted the woman while conducting a traffic stop near a gas station. He claims he saw her step on the pro-police flag, “crumble it up in a destructive manner and throw it into a trash can all while smirking in an intimidating manner towards [him].”

The woman could face up to a year in prison or a fine of up to $2,500 for allegedly destroying stolen property “in a manner to attempt to intimidate law enforcement.”

Most states have hate crime statutes, or laws that allow the government to enhance penalties for crimes that are directed at victims because of a victim’s race, religion, ethnicity, sexual orientation, gender, or disability.

In recent years, states have tried to extend or apply hate crime statutes to cases involving individuals accused of intimidating police officers. In 2016, Louisiana passed a law that added police officers as a protected class in the hate crime statute. And in 2018, Pennsylvania officers charged a black man with “ethnic intimidation” for calling them Nazis while he was being arrested.