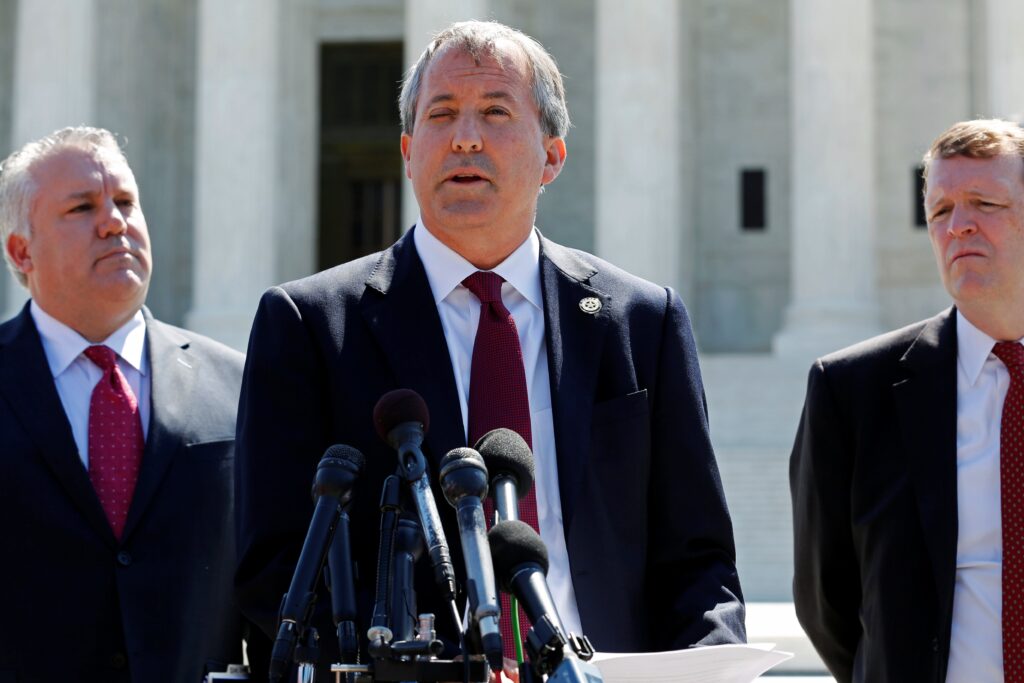 Texas Attorney General Ken Paxton (C) holds a news conference to announce Texas and 20 other states have filed a lawsuit against the state of Delaware over millions of dollars in unclaimed official checks Paxton says have wrongly been remitted to Delaware, at the Supreme Court building in Washington, U.S. June 9, 2016. REUTERS/Jonathan Ernst

Two Internet trade associations are suing Texas and its Attorney General Ken Paxton over a recent law that regulates social media companies’ ability to remove users from their platforms.

Filed on September 22nd in the U.S. District Court for the District of Texas Austin Division, NetChoice and Computer and Communications Industry Association (CCIA), which represent Facebook, Twitter, YouTube, and others, contend that  House Bill 20 violates the First Amendment.

HB 20 “imposes impermissible content- and viewpoint-based classifications to compel a select few platforms to publish speech and speakers that violate the platforms’ policies,” the complaint reads.

Facebook, Twitter, and other social media companies “have First Amendment rights to engage in their own speech and to exercise editorial discretion over the speech published on their websites and applications,” NetChoice and CCIA argue. The First Amendment applies to government action regarding speech, and not to the content moderation of private entities such as Twitter and Facebook.

The complaint further argues that the social media sites are protected from HB 20 by Section 230 of the Communications Act. Section 230, part of a federal law, shields platforms from liability for content that is posted to their sites by users. And as such, the trade groups argues, federal law supersedes state law.

The bill, which was signed into law earlier this month by Republican Governor Greg Abbott, comes in the wake of the permanent ban Twitter placed on former president Donald Trump after the January 6th insurrection. Trump has also been banned on Facebook until at least 2023.

Abbott and other Texas Republican lawmakers say that HB 20 is necessary because they believe that conservative ideas and viewpoints are being censored on social media sites.

NetChoice and CCIA are seeking to block the enforcement of HB 20, and want the court to declare that social media platforms are protected under Section 230.

A federal appeals court ruled that a Florida law that requires individuals to be licensed in order to dispense dietary advice doesn’t violate the First Amendment. Heather Kokesch Del Castillo, who calls herself a “holistic health coach,” sued the state, claiming that Florida’s Dietetics and Nutrition Practice Act violates her free speech rights to give advice to her clients.

Collin College, a community college in McKinney, Texas is being sued by a former professor for violating her free speech and assembly rights. In a lawsuit filed on September 22nd in the U.S. District Court in the Eastern District of Texas Sherman Division, Suzanne Jones alleges that Collin College administrators pushed her out for criticizing the school’s COVID-19 response, and in retaliation for two previous incidents in 2017 and 2020.