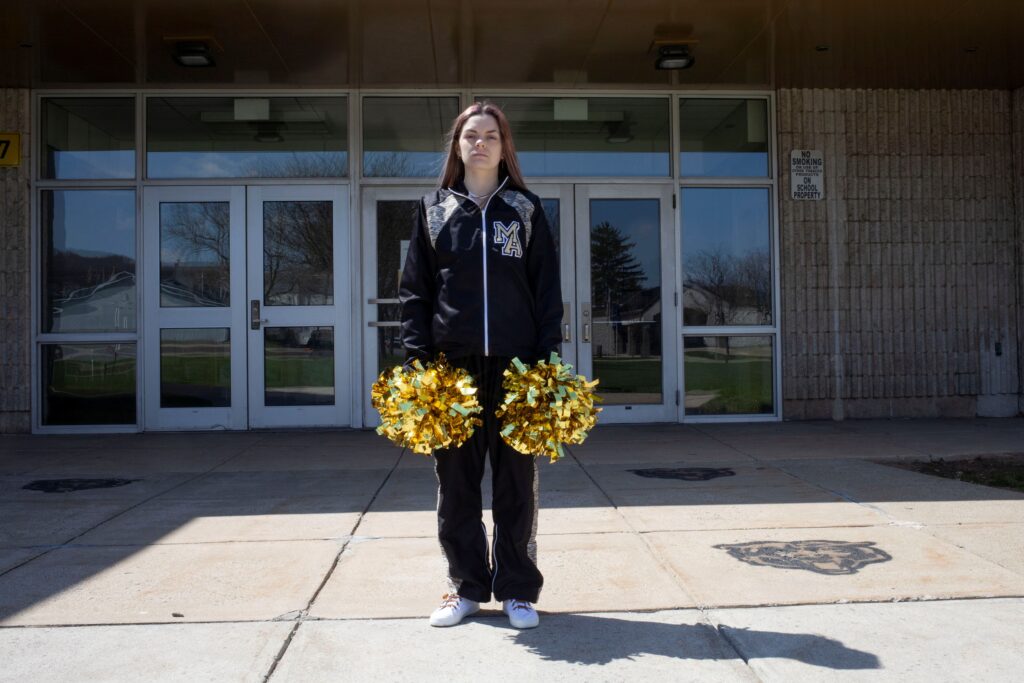 Brandi Levy, a former cheerleader at Mahanoy Area High School in Mahanoy City, Pennsylvania and a key figure in a major U.S. case about free speech, poses in an undated photograph provided by the American Civil Liberties Union. Danna Singer/Handout via REUTERS

On Wednesday, April 28th, the Supreme Court heard oral arguments in a student speech case, Mahanoy Area School District v. B.L.  The case has drawn considerable attention: at least 30 outside groups have filed amicus briefs including the Foundation for Individual Rights in Education, Student Press Law Center, and the Biden administration. We compiled basic information about the facts of the case, the legal questions at issue, and what experts are saying about it.

What is this case about?

The case involves a message posted on Snapchat by a student identified as “B.L.”, after she learned she failed to advance from the junior varsity to the varsity cheerleading squad. The message, posted on a Saturday afternoon when she was off-campus, stated, in part, “fuck cheer, fuck everything.”

B.L. was booted off the cheerleading squad for a year for violating the school’s “Cheerleading Rules,” which prohibit cheerleaders from posting any “negative information” about cheerleading online. In 2017, the American Civil Liberties Union (ACLU) sued the school on behalf of the student. The ACLU argued that the First Amendment limits the school’s ability to punish out-of-classroom speech, and that the “Cheerleading Rules” were overbroad and left too much room for school authorities to make subjective decisions about what is “negative.”

“Schools have no power to punish out-of-school speech because it is lewd or profane,” the ACLU wrote in its memo to the U.S. District Court for the Middle District of Pennsylvania in support of B.L.’s motion for summary judgement.

Mahanoy School District argued that in the age of cyberbullying, much off-campus student social media expression has direct, tangible harm at school, and does constitute a substantial disruption or interference with the rights of others. They argued that oftentimes the intended audience of students’ social media expression is the school community and, thus, they are targeting the school environment.

Federal courts are currently divided as to whether public schools can regulate off-campus student speech. Despite this ambiguity, many states have passed laws that require schools to address cyberbullying which can often take place away from school and outside of school hours. The situation has put schools in an awkward situation: either violate state cyberbullying laws or potentially violate students’ speech rights.

Traditionally, when handling student speech, courts have relied on the Supreme Court decision, Tinker vs. Des Moines Independent Community School District  (1969), which limits school officials’ ability to sanction student speech unless they can show that it would or has “materially and substantially interfere[d]” with the operation of the school. Some courts have just applied the Tinker standard to off-campus speech—see Fourth and Second Circuit rulings—which would require schools to show that the off-campus speech in question was “materially” or “substantially” disruptive.

On this basis, it’s unlikely that B.L.’s speech would fall under unprotected speech. But when the Third Circuit reviewed the case, the judges went further than previous courts and ruled that the First Amendment prevents schools from punishing any off-campus speech. Notably, the Third Circuit was clear to recognize that its decision did not address student speech that is threatening or harassing.

The Supreme Court will now decide if the schools can regulate off-campus speech, and if so, when such regulation is permissible.

What are First Amendment scholars saying?

Frank De LoMonte, a professor of media law at the University of Florida and the director of the Brechner Center for Freedom of Information, says that the school district is overstepping its authority.

“Predictably, the school district and its supporters have melodramatically told the Supreme Court that a decision in Levy’s favor will leave them powerless to protect kids against cyberbullies. That’s nonsense. Speech that is severe enough to violate state bullying laws is already unprotected by the First Amendment, which allows the government to punish harassment. Moreover, punishment is scarcely a school’s only tool for modifying behavior. Of all the functions that schools perform, discipline is what they’re worst at. Punishment is dispensed in discriminatory ways by biased decision-makers, with no meaningful opportunity to appeal. And we want more of it? Schools have plenty of alternative tools, including calling the bully’s parents, that raise no First Amendment issues,” LoMonte wrote for Slate.

Justin Driver, a law professor at Yale and author of “The Schoolhouse Gate: Public Education, the Supreme Court and the Battle for the American Mind,” says that schools have no business telling students what they can say off-campus on their personal social media accounts.

“In the modern era, a tremendous percentage of minors’ speech occurs off campus but online. Judicial decisions that permit schools to regulate off-campus speech that criticizes public schools are antithetical to the First Amendment. Such decisions empower schools to reach into any student’s home and declare critical statements verboten, something that should deeply alarm all Americans,” Driver told The New York Times.

Catherine J. Ross, a law professor at George Washington University and author of “Lessons in Censorship: How Schools and Courts Subvert Students’ First Amendment Rights,” said in an interview with First Amendment Watch that it would be “catastrophic for student speech rights” if the Supreme Court sided with the school.

“Online speech can clearly have an impact on the school environment. But think about what we as a society really want from young people. We want them to be invested in their school. If we have succeeded in acculturating them as a student, then a great deal of what they are going to talk about will have to do with school. They are going to talk about their teachers, coaches, principal, and classmates. That is the students’ world, and we want it to be their world. If we give schools too broad an authority to punish online speech, what message are we sending them?,” Ross said.

What should I read to better understand this case?

Several court documents are also available for public view. Here are some that might be of particular interest to our readers:

How can I listen to the oral arguments?

C-SPAN is broadcasting an audio recording of the oral arguments on their website. You can also read a David L. Hudson’s commentary of the hearing and the justice’s initial response to the case here.

A federal court ruled that two Wisconsin public schools that banned students from wearing clothing with depictions of firearms did not violate students' First Amendment rights. The decision to side with the school came as an unpleasant surprise to free speech scholars who thought the schools’ dress code policies were overly restrictive.