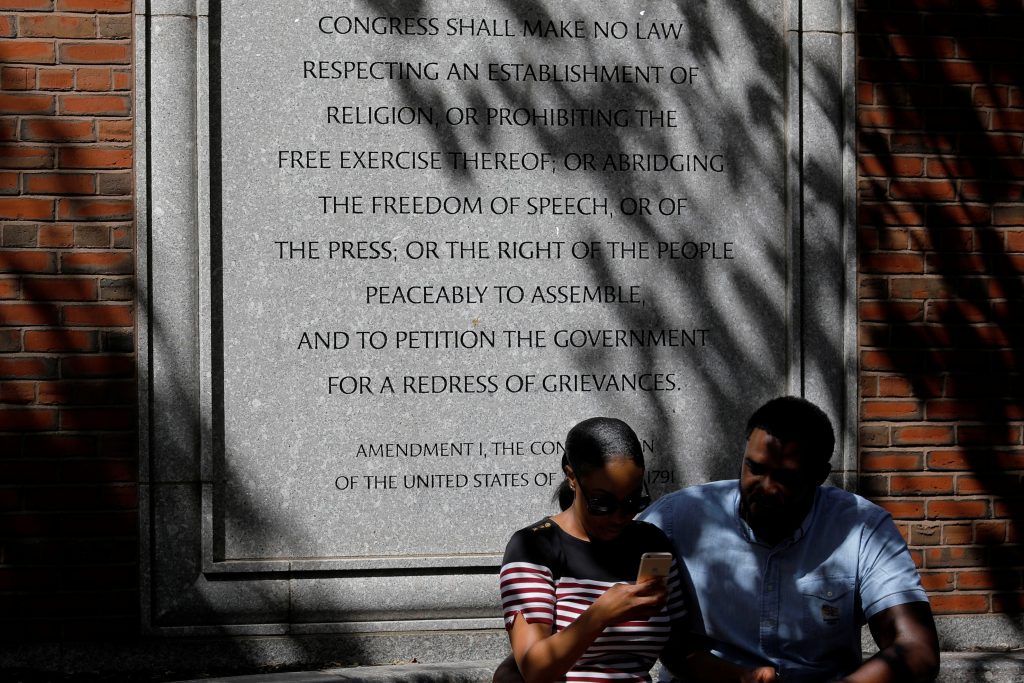 A couple sits under the words of the First Amendment of the U.S. Constitution, which declares the right to freedom of speech and freedom of the press, at the U.S. Federal Courthouse in Boston, Massachusetts, U.S., September 4, 2018. REUTERS/Brian Snyder

On April 7th, a California school district settled a lawsuit brought by a former high school student over an offensive video he posted on his Twitter account. As part of the settlement, the San Ramon Unified District agreed to pay the student $665,000, and issue a public apology.

“The landmark settlement figure sends a strong message to public school officials throughout the country that the First Amendment prohibits them from censoring off-campus student speech that does not substantially disrupt school activities,” Frank LoMonte, First Amendment scholar and former Student Press Law Center executive director, said in a statement on April 7th.  “This is especially true in instances such as this where the speech was made on a weekend, entirely off-campus, and with no school resources.” LoMonte was not involved in the lawsuit, but is an advocate for student speech issues.

According to the Danville San Ramon, Nathaniel Yu created a James Bond-style video with his friends to promote his campaign for student president. The video, shot at home without any school equipment, depicted Yu rescuing a person kidnapped by two terrorists who had forced the victim to participate in a video game competition.

The video drew heavy criticism from students and parents who said it contained harmful stereotypes of Muslims. The video has since been removed from Twitter, but court documents acquired by the East Bay Times in 2017 said the video including depictions of “torture” as well as “repeated racist and insensitive references to Middle Eastern people, stereotyping them based on their dress, accents and language, names, manner of praying and religious dietary restrictions.”

Yu went on to win the most votes in the election for student president, but was disqualified and removed from his position because of the video. School officials reinstated his title after Yu’s family filed a lawsuit alleging that the school’s punishment of their son had violated his First Amendment rights.

According to the Mercury News, Yu did not drop the lawsuit after his title was reinstated, claiming that district employees had continued to publicly disparage him for the video. The school district agreed to a settlement with Yu’s family on April 7th. In addition to the cash payout, the district has agreed to publicly apologize for the negative effects, disruption, and emotional distress.