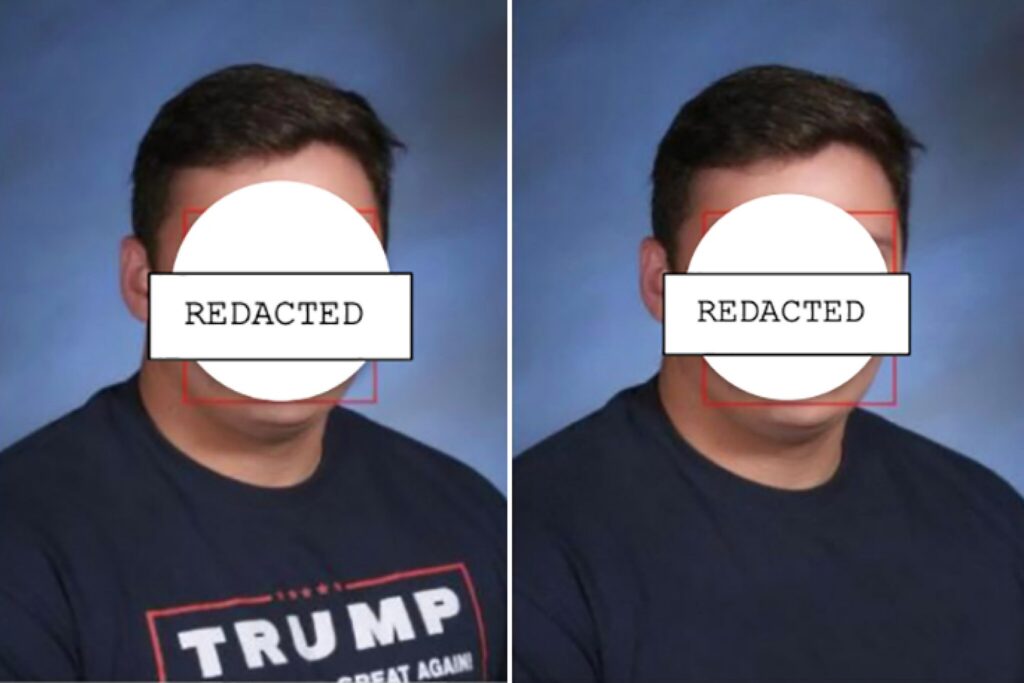 A New Jersey teacher was suspended in 2017 after parents complained that their children’s photographs had been altered to remove political slogans. The teacher sued the school in 2019 for framing her. The before and after images are included in her complaint.

A New Jersey school district agreed to pay $325,000 to a teacher as part of a settlement after the teacher sued the district for emotional distress and imposing an unconstitutional gag order on her speech.

Susan Parsons, a former yearbook advisor at Wall Township High School, was suspended in July 2017 after multiple parents complained that their children’s photos had been altered in the school yearbook. Two students who wore clothing with Trump slogans had their shirts photoshopped to appear blank, and another student complained that a quote from Trump that she had asked to be included underneath her yearbook photo had been deleted.

The incident attracted public attention, as most of the families who lived in the district voted for Donald Trump in the 2016 and 2020 election. In response, school administrators sent an email to parents assuring them that “there [was] nothing in their student dress code that would prevent a student from expressing his or her political views,” and that they were not aware that the yearbook staff had planned to censor the students’ political speech.

But Parsons said in court papers that the administration was not only aware of the photoshopped images, they were the ones who directed her to edit them.

According to a lawsuit Parsons filed against the school district in 2019, the administration had always required her to submit the yearbook for approval before publication. In 2017, the school secretary directed her to photoshop the students’ clothing to remove the Trump slogans. But when the students’ parents complained to the school that the decision to edit the photos violated the student’s expressive rights, the school administrators shifted the blame onto Parsons.

In July 2017, Parsons received a letter informing her that she was being suspended for altering the students’ photographs.

Though Parsons wanted to clear her name, a school policy that required staff members to get permission from the school superintendent before speaking to members of the press meant that speaking up could mean losing her job. As a result, Parson avoided speaking to the press even after she was repeatedly harassed.

Due to the national attention the yearbook episode attracted, Parsons has received dozens of threatening letters, emails, and voicemails from people who believe she censored the students’ political speech. One accused her of being a nazi, communist, and anti-American. Parsons became so afraid that she stopped riding her bicycle because she was afraid someone would recognize her and hit her with their car.

Public schools can impose some restrictions on employees’ speech, such as statements that may adversely interfere with school’s educational functions. But Parson’s lawyers argue that the school’s policy goes too far, and violates its employees’ speech rights by preventing them from speaking on issues of public concern.

“Barring Plaintiff from discussing any matters related to the editing of the Trump T-Shirt is not a restriction on speech that is necessary for Defendants to operate efficiently and effectively,” the complaint stated.

The school district settled the lawsuit with Parsons on March 18th. According to the Associated Press, she will pocket $204,000, with the rest of the settlement going towards her legal and court fees.