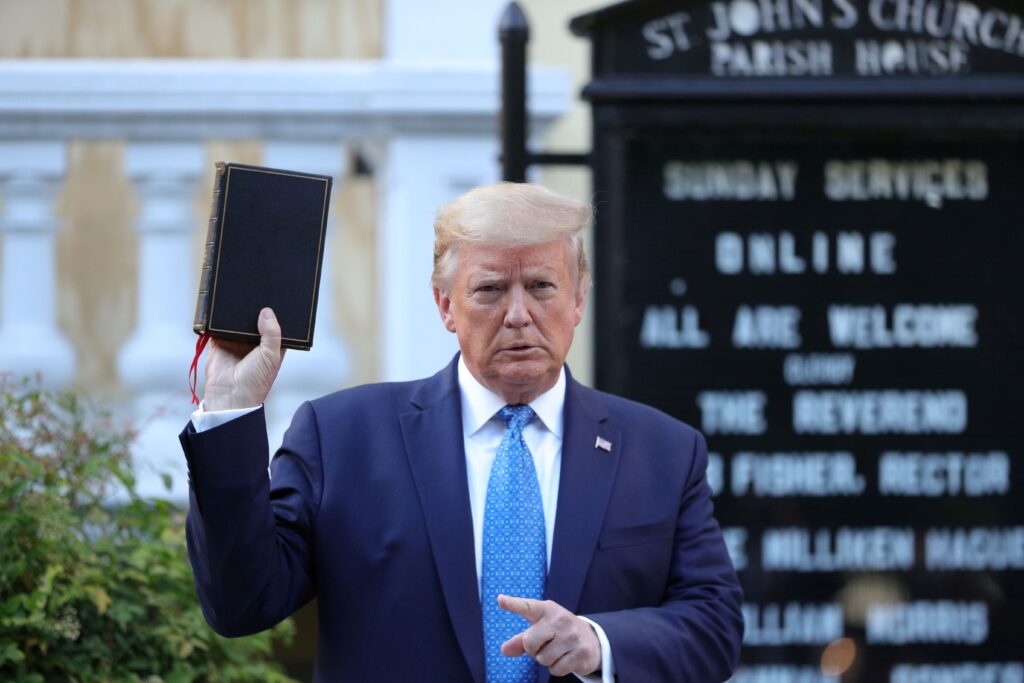 U.S. President Donald Trump holds up a Bible during a photo opportunity in front of St. John’s Episcopal Church in the midst of ongoing protests over racial inequality in the wake of the death of George Floyd while in Minneapolis police custody, outside the White House in Washington, U.S., June 1, 2020. REUTERS/Tom Brenner/File Photo

On June 21st, a federal judge dismissed lawsuits filed against then-President Donald Trump and other federal officials who were being sued for violating the rights of protestors last June.

After a group of protestors were forcibly removed from Lafayette Park in Washington, D.C. on June 1, 2020, the ACLU of D.C., Black Lives Matters, and others filed suit against Trump, then-Attorney William Barr, and other federal officials alleging that they conspired to violate demonstrators right to protest when they cleared the park to allow Trump to pose for a photo op in front of a nearby historic church.

In a 51-page decision in response to the Department of Justice’s request to dismiss the lawsuits, Judge Dabney Friedrich of the U.S. District Court for the District of Columbia concluded that the allegations posed in the lawsuit were too speculative for the suits to proceed.

“These allegations, taken as true, do not show sufficient ‘events, conversations, or documents indicating an agreement or meeting of the minds’ amongst the defendants to violate [plaintiffs’] rights based on [their] membership in a protected class,’ ” Friedrich wrote.

“Merely alleging that the defendant officials communicated, without alleging any details of those communications that suggest an unlawful agreement, cannot justify inferring the requisite agreement for a . . . conspiracy” the judge further noted.

The judge also concluded that Trump, Barr, and other federal officials named in the suits had qualified immunity from civil suits and couldn’t be sued for damages.

Friedrich did, however, let two claims against the Metropolitan Police Department and the Arlington Police Department proceed. The first for “an unconstitutional restriction on protected speech”, and a second claim for First Amendment retaliation. On the latter claim, Friedrich wrote, “The appropriately tailored question is whether a peaceful protestor right to be free from government violence in retaliation for the message of their protest. The Court finds that every reasonable officer would have been aware of such a right on June 1, 2020.”