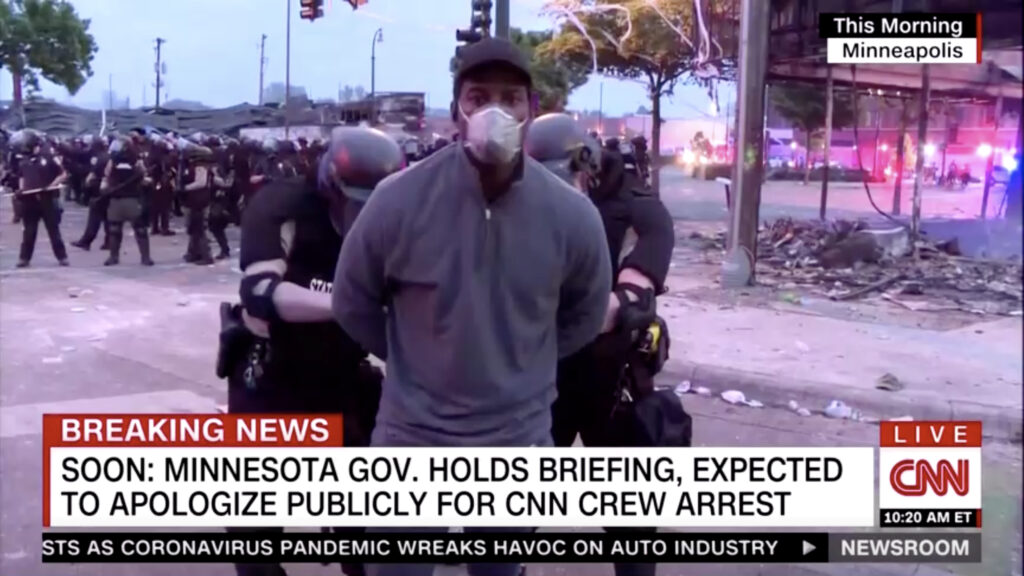 Police arrest CNN correspondent Omar Jimenez and his crew broadcasting live while covering protests related to the death of of African-American man George Floyd, in Minneapolis, Minneapolis, Minnesota, U.S. May 29, 2020, in this still image taken from video. CNN/Reuters

Update: As of June 3, 2020, U.S. Press Freedom Tracker has recorded 279 press freedom incidents including 45 arrests, 180 assaults (149 by police), and 40 incidents of equipment/newsroom damage.

Correction: This article previously said “some of the assaults were perpetrated by the police, while others were committed by demonstrators” and has been edited to make clear that the vast majority of recent attacks on journalists have been committed by police.

Since mass protests erupted over the death of George Floyd, more than 100 journalists have been injured or arrested by police officers while on the job, even after clearly identifying themselves as members of the press.

The U.S. Press Freedom Tracker, an online database that records threats to press freedoms, has an updated tally of these incidents. While some of the attacks were perpetrated by demonstrators, the data shows that police were responsible for the vast majority (over 80 percent) of assaults on journalists.

“To put some perspective on the unprecedented nature of the weekend’s attacks on journalists,” the U.S. Press Freedom Tracker tweeted, “we’ve documented 100-150 press freedom violations in the US per year, for the last 3 years. We are currently investigating *over 100* FROM JUST THE LAST 3 DAYS.”

Journalists have long understood the risks involved in covering protests, but the events of the past weekend point to a worrisome shift: journalists are not only finding themselves caught in the middle of the violence; they are increasingly becoming targets.

Below is a summary of some of the incidents that occurred from May 29 to May 31. It is not intended to be comprehensive, but rather to provide a snapshot of a larger trend.

State patrol or national guard aimed and intentionally shot me in side with canister with green powder. I turned back to him, he taunted me like would shoot me again, twice. Clear cheap shot. Video at the end. I’m fine. Had my media badge clearly on chest. https://t.co/Zn4csqC7tD https://t.co/n5076fRbP7

Police just raided the gas station we were sheltering at. After shouting press multiple times and raising my press card in the air, I was thrown to the ground. Then another cop came up and peppered sprayed me in the face while I was being held down. pic.twitter.com/23EkZIMAFC