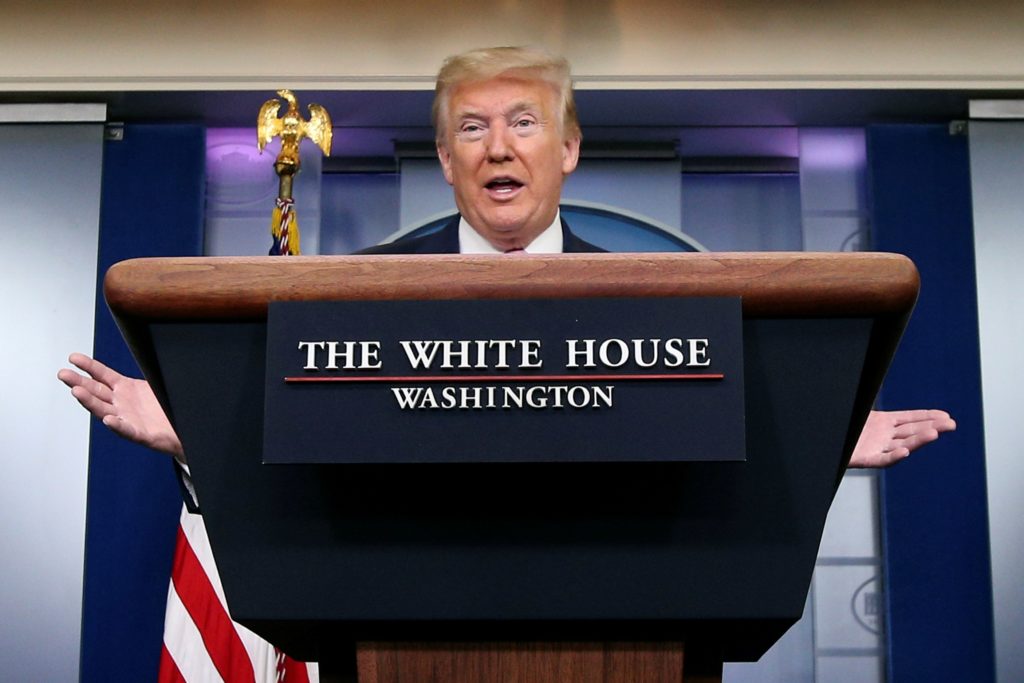 U.S. President Donald Trump speaks during the coronavirus response daily briefing at the White House in Washington, U.S., April 10, 2020. REUTERS/Yuri Gripas
Update: This complaint against Former President Donald Trump was dismissed  in the U.S. District Court for the Southern District of New York May 5, 2022. Trump moved to dismiss the claims of defamation and the intentional and negligent infliction of emotional distress. Since Trump was sued, in part, in his official capacity, the claims were dismissed as he is protected under “sovereign immunity,” as the government cannot be sued without its consent, and when the complaint was filed, Trump was the U.S. President. The federal district court also found that there is no standing for a “group libel” claim, as the plaintiffs themselves noted that calling COVID-19 the “Chinese virus” refers to “22.9 million people.” The opinion stated that “The remarks at issue referred to the geographical origin of the virus rather than the responsibility of the millions of Asian Americans who had nothing to do with the virus. To fall within the ambit of the tort, the conduct must be ‘so outrageous in character, and so extreme in degree, as to go beyond all possible bounds of decency, and to be regarded as atrocious, and utterly intolerable in a civilized community.'”
The court also noted that the request for emotional distress damages fails because the imposition of liability for Trump’s remarks would violate the First Amendment. “The Supreme Court held that even where extreme and outrageous speech on a matter of public concern causes emotional distress to another, the First Amendment bars recovery in civil damages action for the intentional infliction of emotional distress” according to the decision.

On May 20, Chinese Americans Civil Rights Coalition, a nonprofit organization, filed a defamation lawsuit against former President Trump both in his former official capacity and as a private citizen for his comments about COVID-19. The complaint includes a list of Trump’s allegedly defamatory statements, including tweets and campaign speeches in which Trump referred to COVID-19 as the “Chinese virus,” “China virus,” “China plague,” and “kung flu.”

Filed in the U.S. District Court for the Southern District of New York, the complaint references the significant rise in hate crimes and reports of discrimination against Asian-Americans since the beginning of the COVID-19 pandemic, and provides abundant examples of alleged incidents.

The complaint asserts that “[t]he truth matters, words have consequences… especially from those in powerful and influential positions. Against the well-published WHO guidelines and the repeated advices from health officials of his own administration, Defendant intentionally repeated those defamatory words to serve his own personal and political interest with astonishing level [sic] of actual malice and negligence, hence severely injuring the Chinese/Asian Americans communities in the process. If this case does not rise to the level of defamation by an individual holding the most powerful office with the most solemn responsibility for all Americans, then nothing does.”

In addition to defamation per se, the complaint alleges intentional infliction of emotional distress and negligent infliction of emotional distress. According to the complaint, the Chinese Americans Civil Rights Coalition is seeking damages of “$1.00 as an apology to every Asian American and Pacific Islanders (AAPI) living in the United States, total [sic] $22.9 million based on the latest estimate by the U.S. Census on Apr. 19, 2021.”