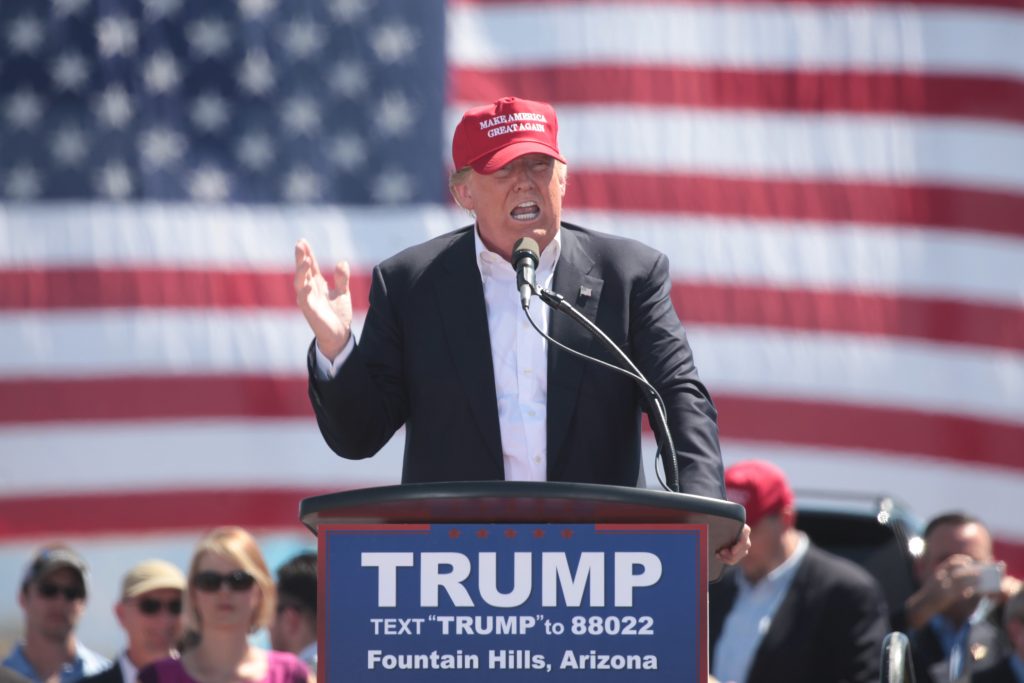 President Trump and his team want to  ‘open up’  libel laws. The goal: to make it easier to sue media organizations for unfavorable coverage. But there is little that the President can actually do to change the libel laws. There is no federal law on libel. State laws control libel, and all such laws are subject to stringent First Amendment protections for the press and other speakers that the Supreme Court has imposed through cases such as the landmark New York Times v. Sullivan decision in 1964. However, threats to loosen the libel laws is noteworthy as part of a  larger effort to criticize the press and attack its credibility. For news, analysis, history & legal background read on.

January 10, 2017: After a Hiatus, Libel Law Changes Once Again in the News

President Trump reiterated the need to change the nation’s libel laws. “Our current libel laws are a sham and a disgrace and do not represent American values or American fairness,” the President said at a White House meeting.

In an interview on “This Week” Sunday, Trump’s chief of staff, Reince Priebus,  stated the news media should “be more responsible with how they report the news” and confirmed the administration was considering strengthening libel laws. 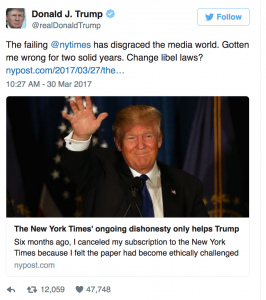 The Republican Presidential candidate said he would “open up our libel laws so when they write purposely negative and horrible and false articles, we can sue them and win lots of money.”

The New York Times analyzes whether the President-Elect could carry out his promise to make the libel laws more advantageous to people suing about unfavorable stories.

America’s most famous First Amendment lawyer has this surprising message: “Press lawyers ought to bear in mind that if things get rough, if the relationship is one of constant denigration and threats, it may be time for journalists to think about using libel laws in a way that is constitutional.”

A Gallup Poll shows that only 32 percent of Americans have a “great deal” or “fair amount” of trust in the press. This compares to 72 percent in 1976, following the media’s generally admired investigative reporting into Watergate and the Vietnam War.

In New York Times v. Sullivan (1964), the Supreme Court recognized that protection of reputation could impact the freedom of speech and press. To protect expression, the Court imposed constitutional rules that make it very difficult for a plaintiff to make a successful libel claim.

Adam Chiara writes in the Hill that, though there has been a great deal of discussion about changing libel law, not much can be done because libel is a matter of state law. “Additionally, the Supreme Court has placed constitutional limits on how states can define libel. To change that would require either the Supreme Court to overrule it or a constitutional amendment.” Social media increasingly pushes the boundaries of how we define ‘actual malice’ and therefore libel, so there might be some movement in the future – if various constituents can agree.

NPR Interviews Bruce Sanford, a libel law expert. Sanford: “If you don’t like speech, the answer is not to censor that speech or to try to silence it. What our traditions call for is more speech.”

Writing in the Daily Beast, Susan Seager says “if the Supreme Court weakened protections for political speech, then Trump might lose a lawsuit filed against him by three protesters who claim that he incited violence against them by shouting to his supporters “get ’em out of here” at a March 2016 rally in Kentucky.” Proving actual malice is tricky she adds. Trump himself has filed seven libel or other speech-related lawsuits in the past 30 years, and two of those cases were dismissed because he could not prove actual malice.