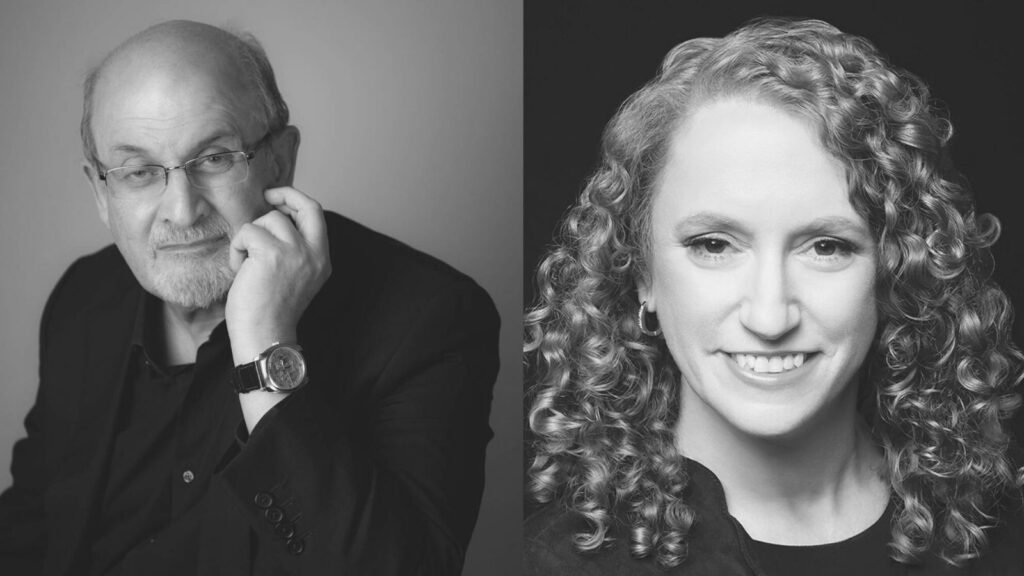 Writer Salman Rushdie and human rights advocate and PEN America CEO Suzanne Nossel discuss today’s most pressing free speech issues, including the monopoly of social media giants and the rise in global attacks on free expression. The two also discuss PEN America’s recent settlement with the U.S. government and why it’s viewed as a victory for press freedom.

The speakers are introduced by Professor Stephen Solomon, Editor of First Amendment Watch and author of Revolutionary Dissent: How the Founding Generation Created the Freedom of Speech.

Salman Rushdie is a British Indian novelist and essayist whose work combines magical realism with historical fiction and is primarily concerned with the many connections, disruptions, and migrations between Eastern and Western civilizations.

Rushdie’s most recent novel, Quichotte, was a New York Times bestseller and was shortlisted for the 2019 Booker Prize. His second novel, Midnight’s Children (1981), won the Booker Prize in 1981 and was deemed to be “the best novel of all winners” on two occasions, marking the 25th and the 40th anniversary of the prize.

His fourth novel, The Satanic Verses (1988), was the subject of a major controversy, provoking protests from Muslims in several countries. Death threats were made against him, including a fatwā calling for his assassination issued by Ayatollah Ruhollah Khomeini, the Supreme Leader of Iran, on 14 February 1989. The British government put Rushdie under police protection. In 2012, Rushdie published Joseph Anton: A Memoir, an account of his life in the wake of the controversy over The Satanic Verses.

The recipient of numerous accolades, Rushdie is a member of the American Academy of Arts and Letters and in 2007 he was knighted by Queen Elizabeth II for his services to literature.

He has been a Distinguished Writer in Residence at the Arthur L. Carter Journalism Institute of New York University since 2015.

Suzanne Nossel is a human rights advocate, former government official, author, and Chief Executive Officer of the literary and human rights organization PEN America. She has served in a variety of leadership roles in the corporate, non-profit, and government sectors and has led PEN America since 2013. She is the author of Dare to Speak: Defending Free Speech for All.

As CEO of PEN America she oversaw the unification of PEN America with Los Angeles-based PEN Center USA, the establishment of a Washington, D.C. office to drive policy advocacy in the nation’s capital, and the creation of a network of PEN America chapters across the organization. Under her leadership, the organization has advocated for free expression in Hong Kong and China, Myanmar, Eurasia, and the United States.

Professor Stephen D. Solomon is interim director of the Arthur L. Carter Journalism Institute of NYU and director and founder of the Business and Economic Reporting graduate program there. His latest book, Revolutionary Dissent: How the Founding Generation Created the Freedom of Speech, explores how the raucous political protest of the nation’s founding period gave meaning to the freedoms of speech and press at a time when it was a crime to criticize government and public officials. He is currently working on a book that will tell the narrative story of the birth of America’s Bill of Rights. He is founding editor of FirstAmendmentWatch.org, a website that launched in October 2017. It provides news, commentary, and legal and historical context for the many free speech conflicts around the U.S.

In addition to business journalism, he teaches graduate and undergraduate courses on the First Amendment. His earlier book, Ellery’s Protest: How One Young Man Defied Tradition and Sparked the Battle Over School Prayer, explores the landmark 1963 case (Abington School District v. Schempp) in which the U.S. Supreme Court ruled that state-sponsored prayer and Bible reading in the public schools violated the religious liberty protected by the First Amendment. The case still inflames passions today as Americans debate what role, if any, that religion, prayer, creationism, intelligent design, and the Ten Commandments should play in the public schools.