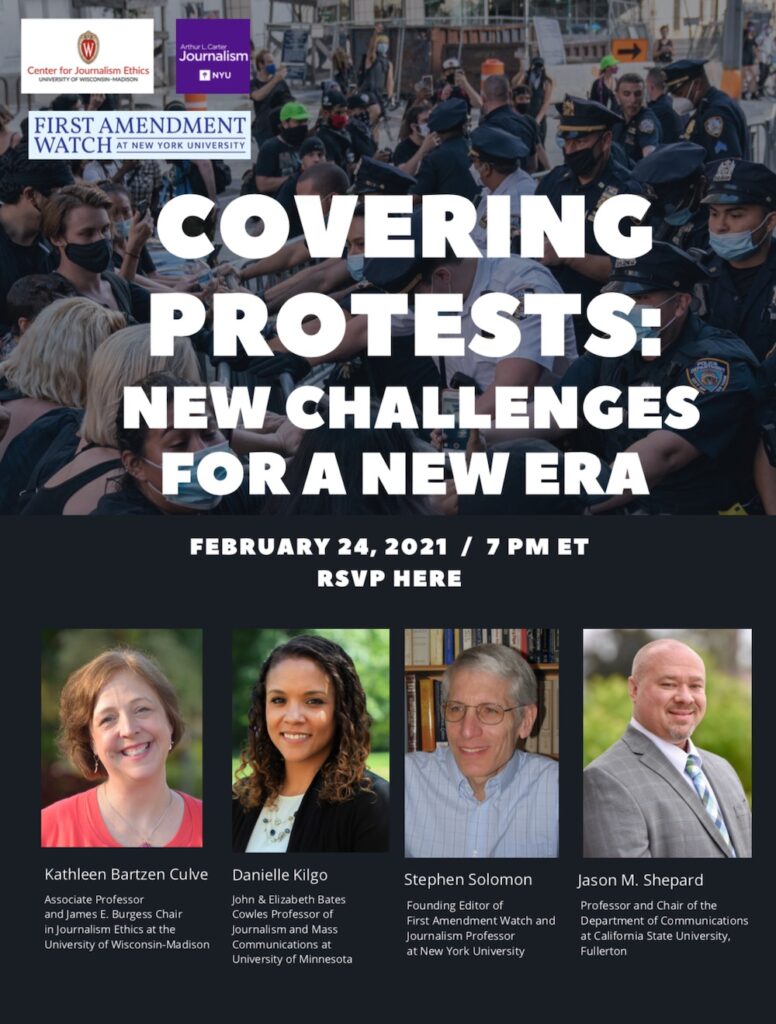 While journalists have a First Amendment right to record people protesting in public places, there are other ethical considerations that may influence their decisions when reporting on a demonstration. The rise of police surveillance technologies has led some photojournalists to wonder whether they should blur subjects’ faces to protect protestors’ identities. Activists have called on the media to pay closer attention to the language they use- to describe peaceful protestors compared to rioters. And media commentators have raised questions about the journalistic practice of telling both sides of an issue (both-siderism), when it’s evident that one side is misrepresenting the facts.

Join First Amendment Watch at New York University and the Center for Journalism Ethics at the University of Wisconsin-Madison in a conversation about how reporters, photographers, and editors should weigh their responsibility to report on public matters balanced against ethical concerns such as the privacy and safety of their subjects.

The event has passed. You can watch a recorded version below:

See relevant teaching materials including our guide on Recording Video and Audio of Police Officers and the First Amendment Right to Protest.

Jason Shepard is professor and chair of the Department of Communications at California State University, Fullerton, one of the largest mass communications programs in the United States. His research examines the role of the First Amendment in American democracy, journalism, and culture. He is co-author of the textbook, “Major Principles of Media Law,” and writes a regular media column for a California Publisher called “Online Legalities.” Prior to academia, he spent 10 years working as a journalist in Madison, Wisconsin, including at The Capital Times and Isthmus newspapers.

Kathleen Bartzen Culver is the James E. Burgess Chair in Journalism Ethics, an associate professor in the University of Wisconsin-Madison School of Journalism & Mass Communication and director of the Center for Journalism Ethics. Long interested in the implications of digital media on journalism and public interest communication, Culver focuses on the ethical dimensions of social tools, technological advances and networked information. She also serves as visiting faculty for the Poynter Institute for Media Studies, and was the founding editor of PBS MediaShift’s education section.

Danielle Kilgo, Ph.D. is the John & Elizabeth Bates Cowles professor of journalism, diversity, and equality at the University of Minnesota, Twin Cities. Her research primarily focuses on the entanglement of race and gender disparities in visual, digital and social media communication. Currently, Kilgo concentrates on media coverage of social movements, particularly recent protests against violence and racism in the United States. She has authored dozens of peer-reviewed publications that appear in journals such as the International Journal of Press/Politics, Digital Journalism, and Mass Communication & Society.

Stephen Solomon is the –founding editor of First Amendment Watch. He is Marjorie Deane Professor of Journalism and the Interim Director of NYU’s Arthur L. Carter Journalism Institute, where he teaches First Amendment law. His most recent book, Revolutionary Dissent: How the Founding Generation Created the Freedom of Speech (St. Martin’s Press, 2016), explored the birth of freedom of expression in America’s founding period. It was named First Amendment book of the year by the legal blog Concurring Opinions.

First Amendment Watch, ConSource, and the John Brademas Center at New York University will co-host a panel discussion entitled, “Hate Speech on Social Media: Is There a Way to a More Civil Discussion?”