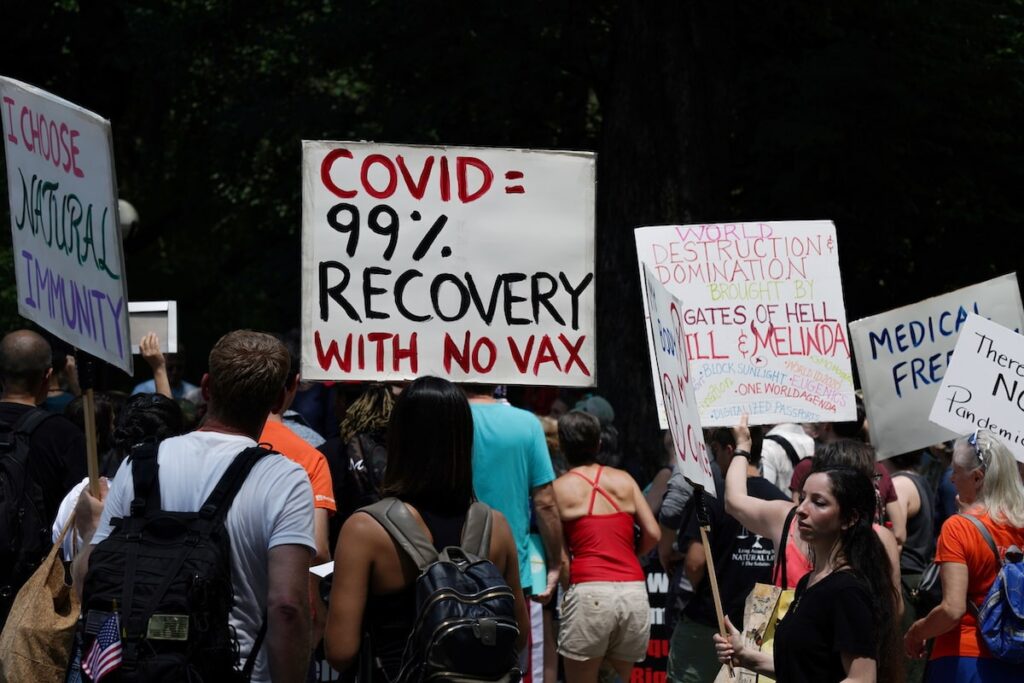 California lawmakers are considering a bill that would create penalties for different kinds of protest activity near vaccination sites in order to protect patients and health care workers from intimidation from “anti-science extremists.”

If passed, SB742 would create a 100-foot buffer zone around vaccination clinics where individuals cannot “knowingly approach a person… for the purpose of obstructing, injuring, harassing, intimidating, or interfering with… that person in connection with any vaccination services.”

The bill defines harassment as getting within 30 feet of a person seeking vaccination services for the purpose “of passing a leaflet or handbill, displaying a sign to, or engaging in oral protest, education, or counseling with that other person in a public way or on a sidewalk area.” Protesters who break the 30-foot “bubble” could face up to $1,000 in fines or 6 months in jail.

The Supreme Court has upheld similar protest-free or protest-limited buffer zones around abortion clinics, high-profile political events, and polling places. In these cases, the government has to show that the regulation is content and viewpoint neutral–it does not single out specific kinds of speech or viewpoints–and that the time, place, or manner restrictions it created was reasonable and gave ample opportunity for alternative channels of communication.

In an interview with California Healthline, Eugene Volokh, a Constitutional law professor at University of California Los Angeles, said that the bill was “clearly unconstitutional” because it targeted a specific subject matter.

“Someone could hand out an anti-war or anti-fur leaflet and not run afoul of the law,” Volokh told the Healthline.

He also told the reporter that the 30-foot required “bubble” between protesters and patients was far larger than the kinds of “bubbles” the court has upheld in the past. For example, in McCullen v. Coakley (2014) the Supreme Court struck down a Massachusetts buffer zone law because it found that its requirement that protesters stay within 35 feet of an abortion clinic banned “substantially more speech than [was] necessary to further the government’s legitimate interests.”

Timothy Zick, a law professor at William and Mary Law School, said in an email that he agreed with Volokh’s assessment of the California bill.

“California certainly can protect against activity that interferes with ingress and egress from medical facilities. It can enforce criminal conduct laws, as the Court suggested in McCullen. It can enforce noise ordinances. In short, it can protect access to and peaceful provision of medical services. California’s law goes beyond that and regulates based on content,” Zick said.

California Senator Richard Pan (D-Sacramento) introduced SB742 in January after police briefly shut down a mass vaccination clinic in Los Angeles after a group of about 50 anti-vax protesters carrying signs blocked the entrance. His team has stated in numerous press statements that current laws do not give law enforcement the tools to balance free speech rights with the right to receive healthcare at vaccination sites.

The California Senate passed the bill earlier this Summer, though Senators asked that the bill be reviewed by the Committee on Appropriations before it is sent to the Assembly.