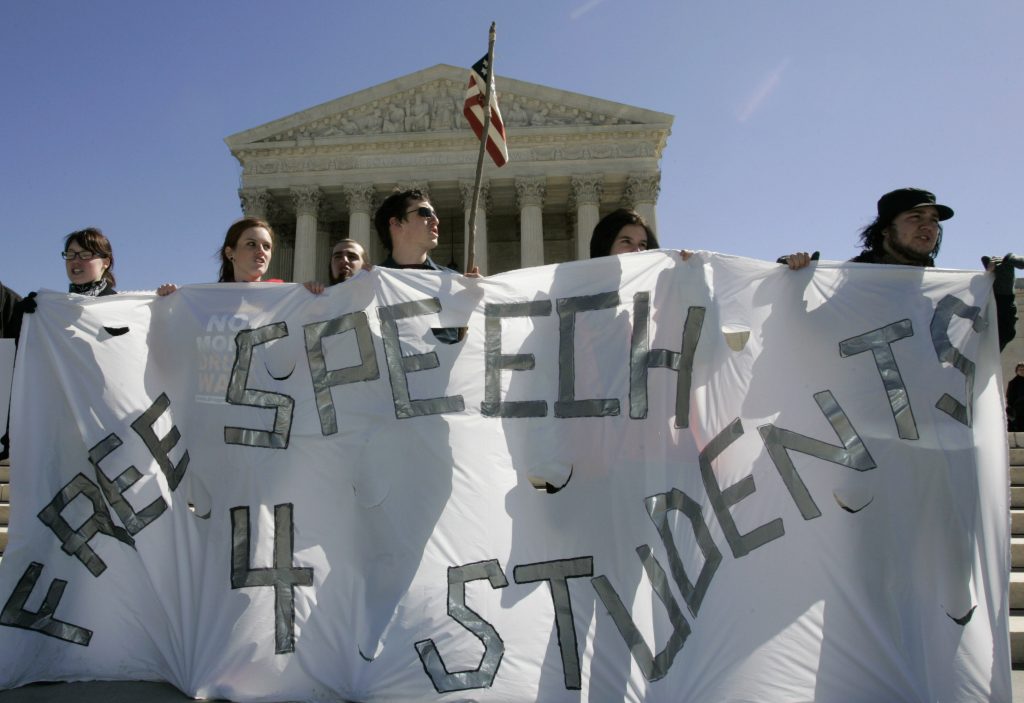 In Tinker, the Supreme Court famously declared that students “do not shed their constitutional rights to freedom of speech or expression at the schoolhouse gate.”  The Court also declared that public school officials cannot act with “undifferentiated fear or apprehension of disturbance.”

The Court’s ruling meant that officials in Des Moines, Iowa, violated the First Amendment rights of Mary Beth and John Tinker when they wore black armbands to school to protest U.S. involvement in the Vietnam War. The Court’s ruling emphasized the passive, political nature of the Tinker’s expression.

The Court in Tinker further declared that school officials could prohibit student speech only if they could reasonably forecast that the student speech would cause a substantial disruption or material interference with school activities or invade the rights of others.

The Times article indicates that the ACLU of Oklahoma sent a letter to school officials, emphasizing the Tinker standard. That is not surprising, as it was the ACLU who helped Mary Beth and John Tinker litigate their case all the way to the U.S. Supreme Court.

The school officials in Ardmore, Oklahoma cannot prohibit students from wearing “Black Lives Matter” clothing simply because they don’t like the viewpoint or because they have a generalized fear of it.  They must be able to point to evidence of a substantial disruption.  And the disruption must be substantial; a minor disruption is not enough.

The school may argue that elementary school children have less First Amendment rights than, say, middle or high school students.  After all, Mary Beth Tinker was in middle school and John Tinker was in high school at the time of their armband controversy.

But, elementary school children have First Amendment rights as well. Recall the Supreme Court’s historic decision delivered on June 14, 1943 in West Virginia Board of Education v. Barnette (1943).  The Barnette sisters were in elementary school in Charleston, West Virginia, when they were kicked out of school for refusing to salute the flag and recite the Pledge of Allegiance.

“That they are educating the young for citizenship is reason for scrupulous protection of Constitutional freedoms of the individual, if we are not to strange the free mind at its source and teach youth to discount important principles of government as mere platitudes.”

The First Amendment is not a “platitude.” It is our blueprint for personal freedom. And public school students should not lose that freedom just because school officials don’t like the viewpoint on their t-shirts.