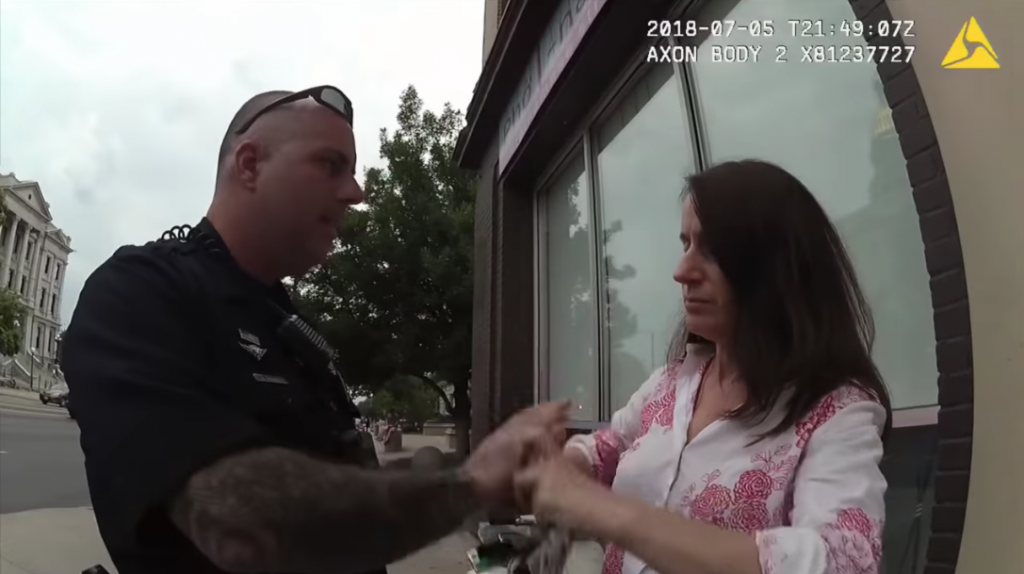 Susan Greene was handcuffed and detained by Denver police officers on Colfax Avenue on July 5, 2019. (Screenshot via body-cam footage provided by city of Denver)

Denver’s Police Department has agreed to strengthen First Amendment training for police officers as part of a settlement with The Colorado Independent‘s editor Susan Greene who was handcuffed and detained while recording another person’s arrest. The department has also agreed to pay Greene $50,000 and to update its policies on police bias and seizure of recording devices.

Greene was driving when she saw a group of police officers standing around a naked, handcuffed black man. An investigative reporter with experience covering police violence, Greene pulled over to record the encounter with her iPhone. The two officers on the scene ordered her to stop, citing the naked man’s privacy rights. When Greene refused to stop recording, invoking the First Amendment, the officers seized her phone, handcuffed her, and pushed her into a police car.

Though Greene’s phone was taken from her, the interaction was recorded on one of the officer’s body cameras, which her newspaper later posted on YouTube. According to the The Colorado Independent, the police released her and returned her phone soon after.

The video shows one of the police officers asking Greene to “stand up straight” and “act like a lady” while in the process of handcuffing her.

The 1st, 3rd, 5th, 7th, 9th, and 11th U.S. Circuit Courts of Appeals have all held that the First Amendment protects people who record police officers performing their official duties in public. The courts have agreed that while police may take reasonable steps to maintain safety and control, they cannot order a person to ‘move on’ because that person is recording them.

In Glik v. Cunniffee (2011), the First Circuit U.S. Court of Appeals wrote “…peaceful recording of an arrest in a public space that does not interfere with the police officers’ performance of their duties is not reasonably subject to limitation.”

Greene’s detainment prompted a 7-month long internal investigation of the Denver Police Department. In February 2019, the department announced that the two police officers who handcuffed Greene had acted improperly and, as punishment, would lose two days worth of pay.

The settlement reached between Greene’s lawyers and the Denver Police Department requires that the department hire Mickey Osterreicher, General Counsel for the National Press Photographers Association, to provide First Amendment training on the right to photograph and record in public. The department has also agreed to implement mandatory sensitivity training on topics including “race, sex, sexual orientation, disability, and gender identity.” Both programs are set to run annually till 2024.