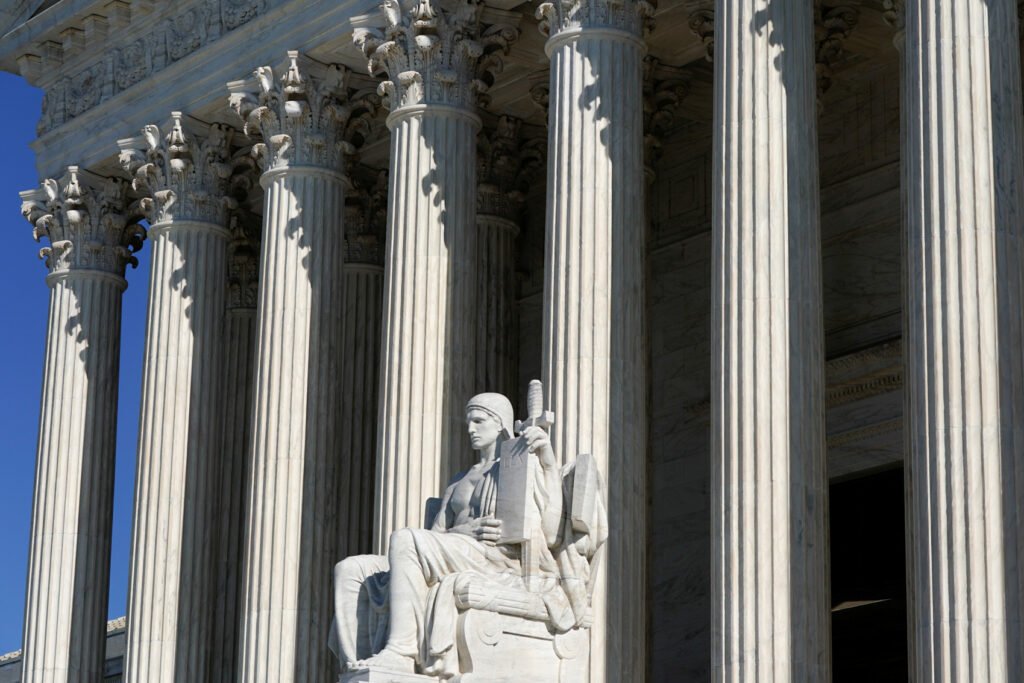 In this Jan. 26, 2022 file photo, the U.S. Supreme Court is seen after it was reported Supreme Court Justice Stephen Breyer would retire at the end of this term. (Reuters/Joshua Roberts)

The Camp Constitution flag flies on Boston’s City Hall Plaza three months after the U.S. Supreme Court ruled 9-0 that the city of Boston violated the First Amendment when it refused to let a religious nonprofit fly its flag.

Boston City Hall has three flagpoles that fly the American flag, the state of Massachusetts’s flag, and a rotating cast of flags from various organizations that apply for permission. Over the past 12 years, flags from events such as Veterans Day, Columbus Day and LGBTQ Pride Month have flown outside city hall.

But when Camp Constitution, whose mission is to “enhance understanding of our Judeo-Christian moral heritage,” applied to fly its flag which bears a red Latin cross, city officials turned down their request.

Harold Shurtleff, the director and founder of Camp Constitution sued, but the city prevailed in both a federal district court and the U.S. Court of Appeals for the First Circuit.

The Supreme Court, however, ruled on the side of Camp Constitution. Justice Stephen Breyer said that the central issues of the case, Shurtleff v. City of Boston, was whether the message conveyed by the flags was private or government speech, and whether the flagpoles could be considered a public forum.

“Finally, we look at the extent to which Boston actively controlled these flag raisings and shaped the messages the flags sent. The answer, it seems, is not at all. And that is the most salient feature of this case,” Breyer wrote.

Breyer, writing on behalf of six other Justices, ruled that Camp Constitution’s flag was private speech in a public forum. As such, Boston was not permitted to discriminate against any group on the basis of its viewpoint. Here, refusing to allow Camp Constitution to fly its flag “based on its religious viewpoint violated the free speech clause of the First Amendment,” Breyer wrote.

“All told,” he added, “while the historical practice of flag flying at government buildings favors Boston, the city’s lack of meaningful involvement in the selection of flags or the crafting of their messages leads us to classify the flag railings as private, not government, speech — though nothing prevents Boston from changing its policies going forward.”

Shurtleff told CBS Boston during Wednesday’s morning ceremony that he and his organization were very excited but “I think what’s more important is the precedent we set.

“This (the legal battle) was never our intention. I just wanted to hold a ceremony to commemorate the U.S. Constitution, Constitution Day September 17th, or close to that, and also about Boston’s rich Christian history,” he said.