One Year Since Deadly Charlottesville Protests 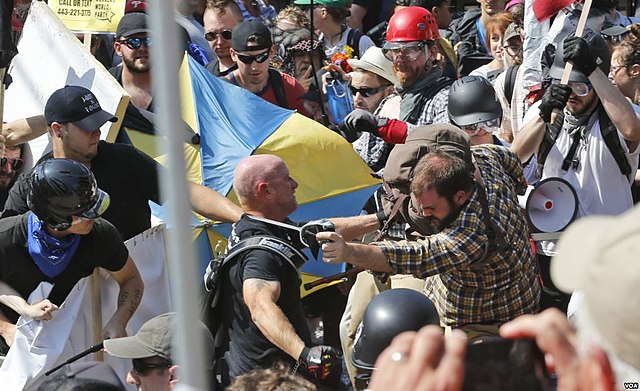 August 12, 2018: What Are The Free Speech Limits For Unite The Right Protestors?

Considering the violence that broke out at last year’s Unite the Right rally, Vox spoke with legal experts to break down what speech and actions at the rally were protected by the First Amendment, and what might be limited.

July 24, 2018: Judge Will Rule On Request For Charlottesville Anniversary Demonstration

A judge will rule on a request for a preliminary injunction by the organizer of last year’s nationalist rally in Charlottesville, VA  that would require the city to grant him a permit so he can hold another event. The organizer Jason Kessler sued the city when they refused to grant him a permit, saying it violated his free speech rights under the First Amendment. Attorneys for the city claim they do not believe Kessler can host a subsequent rally could be peaceful.

August 13, 2017: The Limits of the First Amendment and Hate Speech

Saturday’s “Unite the White” rally in Charlottesville organzined by native Charlottesville conservative in protest against the removal of a statue of Confederate General Robert E. Lee, quickly drew alt-right groups from around the country. Black Lives Matter and other opposition organizers poured in response leading to a deadly confrontation when a car plowed into a crowd killing one.

The recent deadly violence in Charlottesville centered around the removal of a statue of Confederate General Robert E. Lee, another example in a string of debates about Confederate flags and monuments across Southern states writes Jacey Fortin in the New York Times.

August 13, 2017: Does a Militia Have a Role In Defending the First Amendment?

The Washington Post examines the role of the Pennsylvania Light Foot Militia which arrived in Charlottesville in camo with loaded semiautomatic weapons. “Our mission was to help people exercise their First Amendment rights without being physically assaulted,” said the group’s leader Christian Yingling.

In a statement opening a civil rights investigation into Saturday’s car crash in Charlottesville, Attorney General Jeff Sessions said, “The violence and deaths in Charlottesville strike at the heart of American law and justice. When such actions arise from racial bigotry and hatred, they betray our core values and cannot be tolerated.”