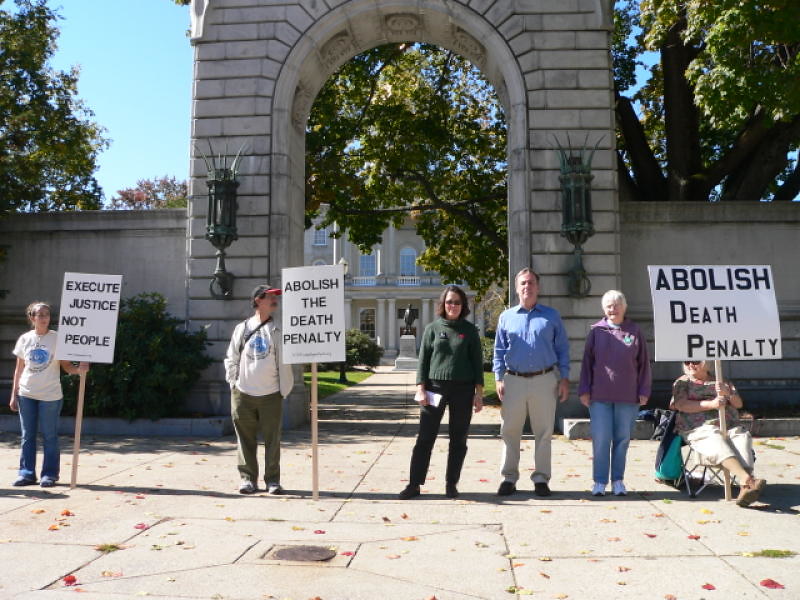 The American Civil Liberties Union of Indiana is suing the Indiana State Police (ISP) for restrictions preventing anti-death penalty demonstrators from gathering outside a federal prison in Terre Haute, Indiana.

Filed in the United States District Court for the Southern District of Indiana on August 4th, the complaint claims that the police have used barricades to block protesters from traveling to the prison grounds since executions were resumed on July 13th. Those wishing to protest have been forced to stand almost two miles away from the site, a distance the ACLU says dilutes the significance of their protest.

“Not only was the site so far away that the prison is not even visible, but many persons who speed by on the U.S. Highway 41 might not even understand the connection between the protest and the pending execution,” the ACLU explained in a memorandum in support of a preliminary injunction.

Courts have struck down no-protest zones of much smaller sizes, even in cases with a clear government interest at stake. The ACLU cited a 2005 Indiana District Court decision that struck down a 500-foot “security zone” at an event in which then-Vice President Dick Cheney was set to appear. Similarly, the Seventh Circuit ruled that a 1,000-foot restriction on selling goods around a sports stadium was unconstitutional because it “overcompensate[d] for an alleged congestion problem on sidewalks.”

Though the police have offered to set up a fenced-in area on prison grounds for protesters to use, the ACLU said it was not a reasonable alternative.

“Not only must a protester commit to being bussed into this area hours before an execution (a method of transportation that is itself risky given the current pandemic), but she must commit to remaining in that area until after the execution is carried out—which may or may not occur on schedule given the possibility of last-minute appeals,” the ACLU memorandum stated.

In a statement on their website, Ken Falk, the legal director ACLU of Indiana, denounced the restrictions as unconstitutional.

“These restrictions obstruct one of the most fundamental rights protected by the Constitution, political speech. There is absolutely no justification for this overly broad ‘no-protest zone.’ The Indiana State Police are severely compromising protesters’ ability to express themselves and to express their opposition to the death penalty while in sight of the prison,” Falk said.