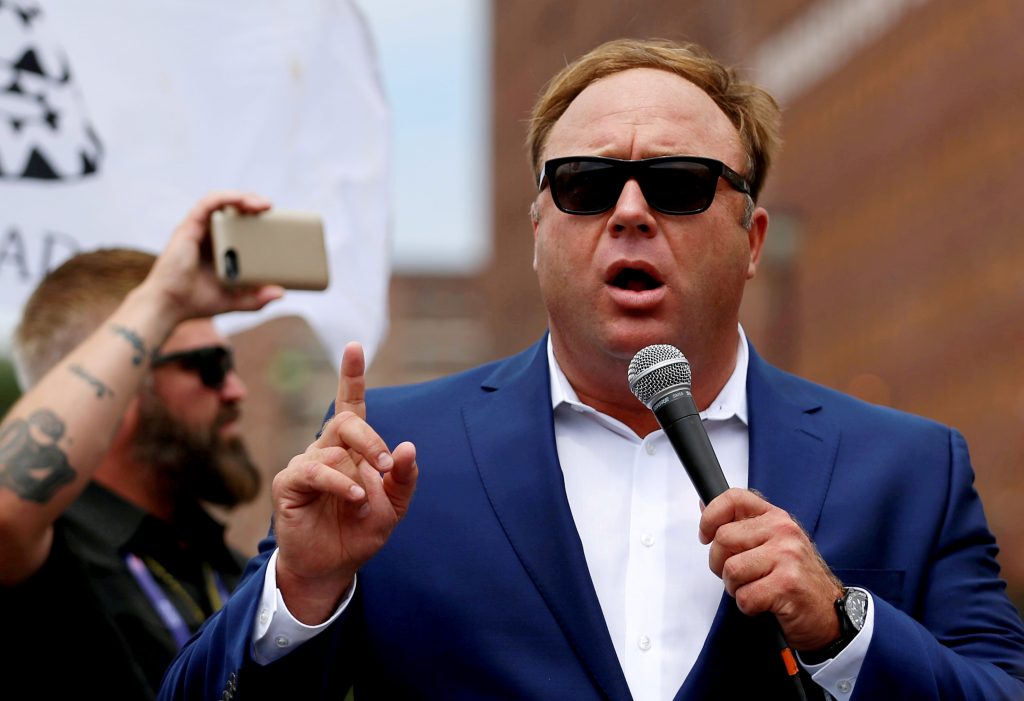 Alex Jones and InfoWars Twitter accounts have been permanently removed from the platform following a live-streamed confrontation on Periscope between CNN’s Oliver Darcy and Alex Jones on Capital Hill, where Jones ranted at Darcy and about Twitter CEO Jack Dorsey who was on the Hill for congressional hearings. Twitter cited a violation of their abusive behavior policy as the reason for the move.

Today, we permanently suspended @realalexjones and @infowars from Twitter and Periscope. We took this action based on new reports of Tweets and videos posted yesterday that violate our abusive behavior policy, in addition to the accounts’ past violations. https://t.co/gckzUAV8GL

Twitter banned Alex Jones from tweeting for one week, citing one of his recent tweets violating its rules. The tweet contained a video that incited violence, according to a company spokesperson.  The tweet has since disappeared.

In an en masse move earlier this week, Alex Jones and Infowars have been banned or removed from most major online content platforms including Facebook, YouTube, Apple iTunes and Podcast app, Spotify, LinkedIn, Pinterest, MailChimp, and more, all citing his content as a violation of terms of service or community guidelines.

Buzzfeed News is calling the removals “one of the largest crackdowns on conspiratorial news content by technology companies to date.”

The string of bans began after months of discussion about how to handle Jones’ conspiratorial and controversial views and over pressure to control misinformation on their sites.

Few companies are still permitting Alex Jones to use their platforms, most notably Twitter.

We didn’t suspend Alex Jones or Infowars yesterday. We know that’s hard for many but the reason is simple: he hasn’t violated our rules. We’ll enforce if he does. And we’ll continue to promote a healthy conversational environment by ensuring tweets aren’t artificially amplified.

In a press release, Facebook explained that it took down four pages associated with Jones and Infowars for violating its graphic violence and hate speech policies, and that Jones was on a 30-day suspension from the site last week. Last month, YouTube banned Jones from livestreaming for 90 days.

Is Banning Jones A Dangerous Slippery Slope Of Censorship Or Justified Action By Tech Companies Enforcing Their Rules?

Alex Jones has been “digitally deplatformed” writes CNN‘s Brian Stelter. He reports on the turning point for the tech companies to ban Jones, the free speech argument, and other lingering questions in this case.

PBS Newshour discusses why kicking Jones off social media platforms is not legally censorship with Lyrissa Lidsky, dean of the University of Missouri School of Law.

Activist and attorney Anoa Changa takes issue with free speech advocates invoking a free speech argument in support of Jones, because, as she writes in the Huffington Post, “free speech absolutism ignores the fact that, in reality, speech is not supported equally across all topics and platforms for everyone.” She argues that independent progressive voices and marginalized are often attacked as well.

“There is no value in this brand of free speech advocacy that will fight tooth and nail on principal for the unprincipled but stay silent about issues of platform and access that effectively deny equitable free speech to marginalized communities,” she says.

Rich Lowry writes in the National Review that although Alex Jones is “poisonous” and a “self-parodic conspiracy theorist,” banning Jones from social media platforms is still worrisome for free speech. He says that social media platforms operating as a public square have the responsibility to be tolerant of the widest  scope of free speech, and takes issue with the tech companies banning Jones as a collective move.

Lawyers who specialize in free speech issues filed an amicus brief in a defamation case against Jones wrote that his rhetoric is full of “absurd conspiracy theories” and urged the federal judge deciding on the case to not allow him to use the First Amendment to justify his speech.

“False speech does not serve the public interest the way that true speech does,” the lawyers from various law schools and firms across the country wrote. “And indeed, there is no constitutional value in false statements of fact.”

USA Today’s “Talking Tech” asks if the platforms have made the right decision to ban Jones.